Top Posts
Colorado football coach Sanders’ unabashed faith
There’s A Light That Enters Houses With No...
Knowing the One Who Always Keeps His Word
Pregnancy Resource Centers Fight For Life Amidst Opposition
This World is Not Our Home
Lessons Learned From a Gingerbread House
Let There Be Peace on Earth
‘I Wanna Dance’ movie: Whitney Houston’s success and...
Fact Finding, Sight Seeing, and Prayer Walking
Kidney donation led to 8 life-saving surgeries
Home Tags Posts tagged with "Rick Griffin"

ALBUQUERQUE, NEW MEXICO (ANS)—One of my fondest memories serving at Calvary Chapel Costa Mesa was taking a break from work and walking across the street to the studio of Gordon McClelland.  McClelland is an art historian, artist, author, collector, and  friend of famed artist Rick Griffin.  Together, Gordon and I would talk for hours about art, life, God, and music.  McCelland would tell me marvelous stories about Griffin, the Jesus People Movement, and art in Southern California.  Gordon is an encyclopedia of knowledge. 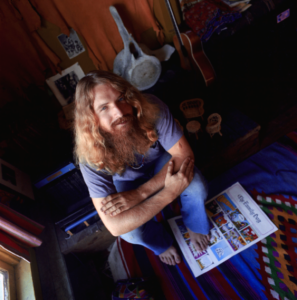 I was reminded of my time with McClelland as I sat through the opening lecture for the exhibit Dreams Unreal: The Genesis of the Psychedelic Rock Poster at the Albuquerque Museum of Art. Museum director, Andrew Connors, gave a fine introduction on the importance of 60’s poster art and the new collection of posters donated to the museum by Dr. James Dunn.  And the book, Dream Unreal, written by curator Titus O’Brien (UNM Press), is an amazing tribute to the collection and exhibit. 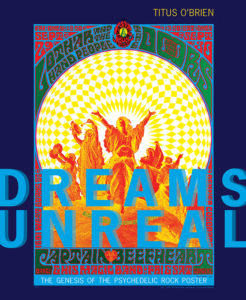 Among the well-known artists discussed in the lecture and within the book are collectively called “The Big Five:” Rick Griffin, Alton Kelley, Victor Moscoso, Wes Wilson, and Stanley “Mouse” Miller. Together, the five artists forged a new style of art. In doing so, the artists influenced generations of people—from musicians, fellow artists, to the rabid collectors of 60’s memorabilia.

The Gospel of John 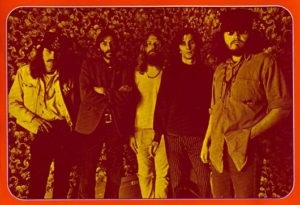 The “Big Five” 1960’s poster artists. Griffin is pictured in the middle.

In the short bio about Griffin written by McClelland in The Gospel of John, Griffin’s conversion is recounted simply: “By 1970, Rick had received Jesus Christ as Savior and was walking with the Lord.”

And after brief discussion of how Griffin was commissioned to paint The Gospel of John series, McClelland writes, “When Rick committed to something, he went all the way.  That was just his personality.  He prayed and studied the gospel of John over and over.  In addition, he listed to Chuck Smith’s Bible tapes and read what other pastors and theologians wrote about the book of John.  After about a month he began serious work on the illustrations.” 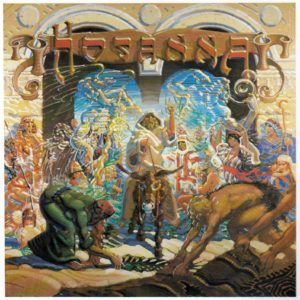 To give insight into the contemporary nature of Griffin’s renderings of the The Gospel of John, McClelland comments on one of the paintings, Hosanna.  McClelland writes, “The Hosanna painting features the triumphal entry of Jesus into Jerusalem…On first look it appears this painting depicts the New Testament era, but on closer inspection people for all periods of time and places can be seen.  On the right side is a 1920’s Spanish dancing girl and Rick’s wife, Ida, holding her new baby, Katie.  Rick himself appears with a staff in hand and a small surfer boy holding a skateboard is to the left of Jesus.  If you look really close you will see that on the boy’s shirt is written Lynard Skynard. The night Rick was painting the depiction of the boy, a radio program announced that an airplane had just crashed, killing several members of that rock band.  This was sort of a prayer for them.”

Griffin’s story is amazing, a hidden gem in the midst of the accolades he deservedly receives for his poster artwork during the 1960’s.

In order to provide a glimpse of his life, I present a short summary I wrote after I attended a Griffin exhibit at the Laguna Museum of Art in 2007.

“What do Jimi Hendrix, The Grateful Dead, Murph the Surf, and Jesus Christ all have in common? On the night of June 23, 2007, the one commonality is the famed artist Rick Griffin. Griffin’s retrospective exhibit, entitled, Heart and Torch: Rick Griffin’s Transcendence, debuted at the Laguna Museum of Art.

“Richard Alden Griffin was born on June 18, 1944 in Los Angeles. Over the course of his life he influenced and led in several fields of art: surf, psychedelic, popular music, and Christian. 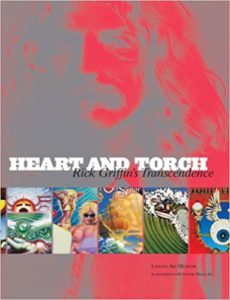 “His earliest known art (early 60’s) was comic-based, akin to Mad magazine artist Don Martin; creating characters for Surf Magazine that now have cult status: Murphy, being the most popular. Incidentally, the surfing company, Hurley, has a line of Griffin shirts with Murphy images.

“As Griffin expanded as an artist, so did his experiences within the culture of the 1960’s. Griffin attended Ken Kesey’s Acid Tests in Watts in 1966, and shortly after headed north to the blossoming Haight-Ashbury hippy scene.

“In San Francisco, Griffin became one of the leading poster artists of the era, creating art for the Doors, Jimi Hendrix, The Grateful Dead, The Who, and Janis Joplin. In 1969, Griffin created some of his most popular images for album covers, Grateful Dead’s, Aoxomoxoa, among them.

“Towards the end of 1969, Griffin takes a surfing trip to Santa Barbara, ending up in at Hollister Ranch, documented in John Severson’s movie Pacific Vibrations.  After a short trip to New Mexico to visit his brother, Rick is inspired to create a ‘cosmic comic book,’ Man From Utopia. 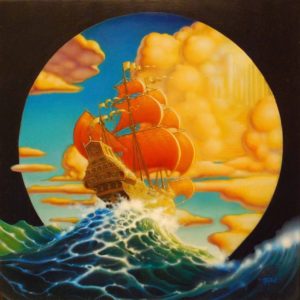 “In 1971, Griffin opens his first one-man show at Long Beach State College. But more importantly, Griffin has a personal experience with Jesus Christ, becoming a Christian and infusing his work with Christian themes and symbolism,” as re-courted above by McClelland.

“In 1977, Rick moves to Santa Ana, California and begins a project for Maranatha Music (commissioned by Chuck Fromm). For this project, Griffin paints scenes from the Gospel in acrylic and ink. Additionally, Rick created posters for Calvary Chapel of Costa Mesa and Harvest Christian Fellowship. 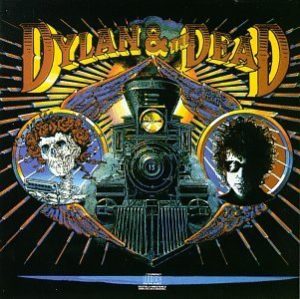 “In 1989, Griffin moved to San Fransisco, California and creates the artwork for the famed Dylan and the Dead album cover. In 1991, Griffin died in a fatal collision on his motorcycle and goes home to be with the Lord on August 18, 1991.”

For more information on the Dreams Unreal exhibit, click here.

Further insight into the life and work of Rick Griffin, click here.

Gordon McCelland’s book on Rick Griffin can be found  here.