Top Posts
Pregnancy Resource Centers Fight For Life Amidst Opposition
This World is Not Our Home
Lessons Learned From a Gingerbread House
Let There Be Peace on Earth
‘I Wanna Dance’ movie: Whitney Houston’s success and...
Fact Finding, Sight Seeing, and Prayer Walking
Kidney donation led to 8 life-saving surgeries
The Power of Curiosity
When Love Came Down at Christmas
A Walk of Faith Begins with a Step...
Home Tags Posts tagged with "Rolling Stones" 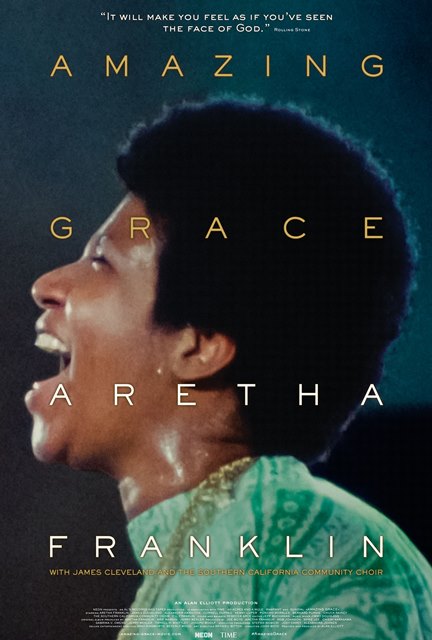 ORLANDO, FL (ANS)  After the Queen of Soul’s 2018 death, her family released the long-mothballed 1972 documentary about recording her bestselling album at a Los Angeles church.  Mick Jagger was in Aretha’s church audience.  Critics are raving.  What’s it all about?

Franklin spent two evenings in January 1972 at New Temple Missionary Baptist Church recording Gospel songs with a choir before a live audience.  Anchored by the classic hymn, Amazing Grace, the sessions included her covers of Marvin Gaye’s Wholy Holy and of Carole King’s You’ve Got a Friend, comments from her pastor father, and plenty of lively audience reaction.  She had returned to her roots, and the result was captivating.

Though legal and technical quagmires kept the Sydney Pollack-directed film in the can for decades, critical acclaim continued for Franklin’s best-selling Amazing Grace audio album. 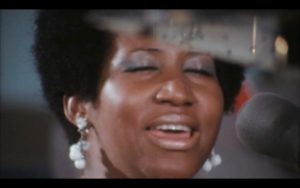 Heard it through the grapevine…

The late singer/songwriter/producer Marvin Gaye called the album “Aretha’s singular masterpiece… her greatest work…The musicians I respect the most say the same thing.”

Rolling Stone notes that album executive producer Jerry Wexler, an atheist, believed the album “relates to religious music in much the same way Michelangelo’s Sistine Chapel relates to religious art. In terms of scope and depth, little else compares to its greatness.”

The movie release has brought renewed praise.  “Don’t bother with tissues. Bring a towel,” advised Pulitzer Prize winning New York Times critic Wesley Morris of the film’s emotional impact.  “Everybody deserves to have Aretha Franklin take them to the moon.” 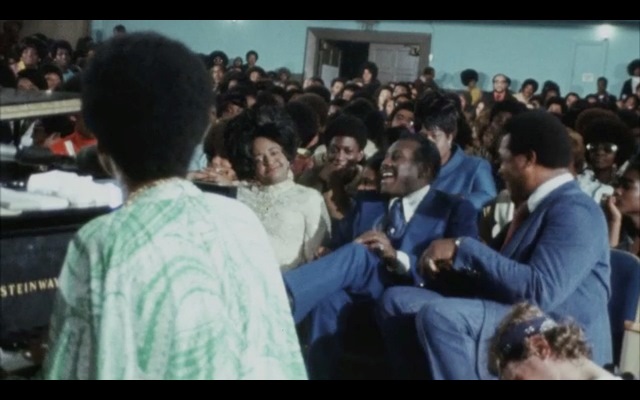 Attendees at the 1972 recording/film session included Mick Jagger with Rolling Stones drummer Charlie Watts.  Jagger recently recalled the event fondly to the Los Angeles Times: “…a really electrifying performance…raised the hair on the back of your neck…super-charged…a different Aretha…than I had experienced before.”

“You were there,” Jagger continued, “you were involved. Being there in a church, you’re part of the experience — you’re not just a member of an audience somehow. You’re not in a posh seat sitting down, where you’ve paid your money and you’re like ‘OK, entertain me.’ It was not that feeling. It was a very different vibe than a normal concert … I think I was singing along.”

The film shows Jagger mouthing words and moving with the rhythm.  “I’m really glad it’s finally coming out to the world,” he remarked of the film’s release. 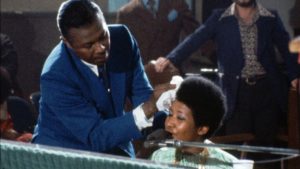 Filmmaker Spike Lee calls Amazing Grace “One of the greatest concerts ever put to film. …Aretha is one of the world’s treasures….”  “It’s a spiritual, religious experience watching that,” he told Deadline.  “This film is historic…part of the story of America. The church.” 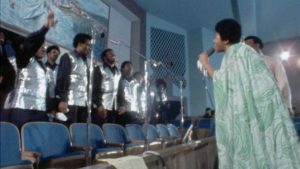 Of course, the hymn Amazing Grace has global popularity.  Its special resonance among African-American communities is a fitting tribute to the song’s origins.  Penned by John Newton, an eighteenth-century British slave-trader-turned-pastor, it encapsulates his own tumultuous journey from oppression, confusion, and despair to faith.

“I once was lost, but now am found,” wrote Newton about finding faith in Jesus after a storm at sea, “was blind, but now I see.”  Newton mentored parliamentarian William Wilberforce, who led a grueling 20-year legislative battle that outlawed the slave trade in the British empire.

Franklin’s sonorous rendering of Gaye’s Wholy Holy echoes similar timeless themes.  The lyrics speak of believing in Jesus; the book he left us; and that believing and following it can help “conquer hate,” “rock the world’s foundation,” and spread love.

Yes, by all means, see Amazing Grace.  Let Aretha take you to the moon… and beyond.