Top Posts
Colorado football coach Sanders’ unabashed faith
There’s A Light That Enters Houses With No...
Knowing the One Who Always Keeps His Word
Pregnancy Resource Centers Fight For Life Amidst Opposition
This World is Not Our Home
Lessons Learned From a Gingerbread House
Let There Be Peace on Earth
‘I Wanna Dance’ movie: Whitney Houston’s success and...
Fact Finding, Sight Seeing, and Prayer Walking
Kidney donation led to 8 life-saving surgeries
Home Tags Posts tagged with "Rudaw TV"

Assyrian International News Agency (AINA) reports Rudaw TV www.rudaw.net visited Christian villages in the Kani Masi District, where some homes are locked up and abandoned. There are 25 such villages in the district, including 10 or so evacuated ones, according to district officials. One local told Rudaw the PKK should leave the area. 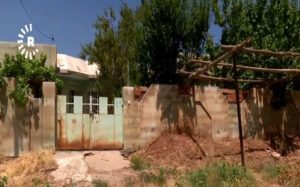 An abandoned home in a Christian village in the Kani Masi District in the Duhok Province. Phot0 – Rudaw TV

“PKK better to go back to Turkey, and fight against the Turkish army inside Turkey, and leave Kurdistan region for peace,” said Shlimon Aseel from the village of Duri, where 15 of the 40 homes have been evacuated.

AINA said the PKK is a Kurdish militant group that has fought the Turkish state for decades for greater autonomy for Turkey’s Kurds. Ankara considers the PKK a terrorist group and regularly strikes apparent targets of the group in the Kurdistan Region. The PKK is based in the Qandil mountains along the Turkey-Iraq border.

PKK fighters are present in the areas around the city of Amedi where Kani Masi is. The area is in the Duhok Province amd close to the Turkish border. Most Christians in the there identify as ethnic Assyrians.

Sarbast Sabri, the head of Kani Masi District, says the Turkish airstrikes hit the district on a daily basis, and negatively impact the lives of civilians.

“Civilians in the area are living in continuous panic, due to the Turkish bombardments and PKK movements in the areas of Kani Masi,” he told Rudaw.

Civilians are frequently caught in the crossfire between Turkey and the PKK, and people empty the villages to escape the fighting.

According to AINA, the Kurdistan Regional Government (KRG) has repeatedly asked PKK fighters to stay away from populated areas and villages. Kurdistan Region Prime Minister Masrour Barzani has also voiced concerns to Turkey over civilian deaths resulting from Turkey’s airstrikes.

Baghdad has likewise called on Turkey to end its attacks, while simultaneously demanding the PKK leave their territories.

Turkey launched Operation claw in late May to drive the PKK away from its border with the Kurdistan Region.

On June 27, Turkish airstrikes resulted in the deaths of at least four Kurdish civilians near the village of Kurtak at the foot of the Qandil Mountains, where the PKK is headquartered.

There was a short-lived peace process between Turkey and the PKK which ended in failure in July 2015. Since then, at least 4,397 people, including Turkish security forces, PKK fighters, and civilians have been killed, according to the International Crisis Group (ICG).

The author of this story, Michael Ireland, is a self-supported media missionary with ANS. Click here to support him as a missionary journalist.
August 4, 2019
FacebookTwitterPinterestEmail