Top Posts
Colorado football coach Sanders’ unabashed faith
There’s A Light That Enters Houses With No...
Knowing the One Who Always Keeps His Word
Pregnancy Resource Centers Fight For Life Amidst Opposition
This World is Not Our Home
Lessons Learned From a Gingerbread House
Let There Be Peace on Earth
‘I Wanna Dance’ movie: Whitney Houston’s success and...
Fact Finding, Sight Seeing, and Prayer Walking
Kidney donation led to 8 life-saving surgeries
Home Tags Posts tagged with "Salim J. Munayer"

JERUSALEM, Israel (ANS) – For many who live in Jerusalem, the last few days have been difficult.

“From my home I could hear the violence from Damascus Gate in the Old City, the shootings and shock grenades. The main reason for the violence is the decision of the police to limit the movement around the Damascus Gate courtyard, an area that is used by many Palestinians during the month of Ramadan for socializing and breaking the fast,” writes Salim J. Munayer, Executive Director of Musalaha, a reconciliation ministry in Israel, in an email update to supporters.

Many young Palestinians began to protest the measure. “They saw it as an act of provocation by the police during their sacred month. The police did not remain passive in the protests and we witnessed a lot of police brutality,” he said. 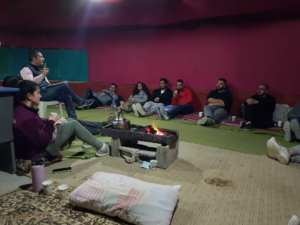 “In addition, in many other locations in Jerusalem including the market, train track and downtown area, organized Jewish-Israeli groups were looking to lynch Palestinians and chanting ‘death to Arabs.’ Several Palestinians were attacked and injured. The Jewish-Israeli groups were led by a far-right Jewish supremacy organization called Lehava (‘Prevention of Assimilation in the Holy Land’), who also have close relations to a political party that passed the election threshold in the past elections. In response to both the protests in Damascus Gate and the lynching, young Palestinians attacked a number of Jewish-Israelis as well. Moreover, there have been several TikTok videos that have gone viral of Palestinians slapping and beating Orthodox Jews in public areas.”

Munayer says that during one of the lynching nights, his two boys in their late twenties were walking back from the YMCA in Jerusalem, not far away from some of the violent attacks. Instead of walking in their flipflops, they were wearing their running shoes in case they were targeted as Palestinians by the Jewish-Israeli supremacists. “It has been a difficult time for all families in Jerusalem, many people have been avoiding going out of their homes,” he said.

“One must also remember that these recent violent clashes are simply physical expressions of much deeper violence within the system itself. The economic situation has been deteriorating in East Jerusalem during the pandemic, Jewish settlers taking over Palestinian homes, house demolitions and the frequent postponement of Palestinian elections which may or may not include Palestinians in East Jerusalem,” he notes.

In the Musalaha  office, the staff had a discussion about the situation, asking many questions, he said. ”What is our role as a reconciliation organization in this situation? How do we respond? What actions do we take? Why do we not hear more voices against violence and racist statements by politicians and Church leaders?”

Munayer reported that after a successful meeting last month in Battir, the Muslim and Christian young adults’ reconciliation-volunteering initiative requested to return to the desert for April’s reconciliation workshop. During this overnight workshop, the group covered Chapters 5 and 6 from Musalaha’s Reconciliation Curriculum: Active Listening and Identity. Click the LINK https://tinyurl.com/nnbycyur  to watch a five-minute video where Musalaha’s teacher and participants share their thoughts and experiences.

Musalaha’s new Israeli-Palestinian women’s group assembled at the “starting line” to begin their shared journey this month, Munayer said. “We conducted our initial pre-desert meetings with the Israeli and Palestinian women separately. During these meetings we discussed the first stage of the reconciliation process: building relationships.

Munayer said the path to reconciliation is not linear but cyclical and chaotic by design. The process is fluid and participants progress at their own pace. Next month, the group will meet in the desert and continue on their journey through the stages. Musalaha’s Women’s Project offers the unique opportunity of placing women at the center of the conversation, as opposed to the margin where they are often placed in mixed-gender groups.

Regarding Musalaha’s  Civil Society Leaders project, Munayer said: “We passed a major milestone this month with our as we took Israeli and Palestinian active community leaders to the desert. The recruitment process was a huge success, we managed to recruit Israeli-Jews and Palestinians from both religious and non-religious backgrounds. 34 of us participated in the desert encounter: 15 from each side, two group leaders, a tour guide, and myself, Salim. As we hiked through the Judean Desert, the participants started navigating through the first stage of reconciliation by breaking barriers, developing relationships, and addressing the imbalance of power between the two groups.

“One of the highlights of this desert encounter was the sharing of traditions between the two groups. The Israeli-Jewish participants demonstrated a Passover meal and described the Jewish customs around it. The Palestinian group explained the month of Ramadan and how one breaks their fast in the evening. This experience allowed participants to learn from each other and ask questions they would not have been able to ask otherwise.”