Top Posts
Knowing the One Who Always Keeps His Word
Pregnancy Resource Centers Fight For Life Amidst Opposition
This World is Not Our Home
Lessons Learned From a Gingerbread House
Let There Be Peace on Earth
‘I Wanna Dance’ movie: Whitney Houston’s success and...
Fact Finding, Sight Seeing, and Prayer Walking
Kidney donation led to 8 life-saving surgeries
The Power of Curiosity
When Love Came Down at Christmas
Home Tags Posts tagged with "Santiago de Compostela cathedral"

RICE LAKE, WISCONSIN (ANS) — For centuries, people have been making the pilgrimage that traces the steps of James the Apostle from the foot of the French Pyrenees to the Santiago de Compostela cathedral on the west coast of Spain

Every year, roughly 250,000 hike the trail, but very few do it in a wheelchair, according to CBNNews.com. 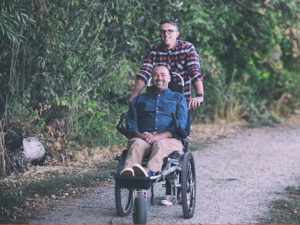 Justin and Patrick on the trail

For Justin Skeesuck, it would be the epic adventure he and lifelong friend Patrick Gray had talked about for years: a 500-mile trek on the legendary El Camino De Santiago, as reported by CBNNews.com.

“If you have those moments in your life where you just know inside and out it’s something you’re supposed to do, I just knew. I just knew,” said Justin.

Patrick said, “I didn’t have any other thought than, ‘Yeah, I’ll push you.’ Cause we’ve just shared so much of life together and it was just one more opportunity to build more memories.”

CBNNews.com says it’s a friendship that started forty years ago. Together, they have supported one another through tournaments, graduations, milestones, and even disease.

In 2004, Justin was diagnosed with Multifocal Acquired Motor Axonopathy, an autoimmune disease that has slowly robbed him of all his motor skills, and will eventually take his life. It has left him completely dependent on his wife Kirstin for daily care. But Patrick didn’t give it a second thought.

The hike is a 5-week trek that traverses mountains, rivers, and desert. Training and preparing for the trip would take two years. Overcoming the doubt that crept in every now and then, took prayer.

“Pat would be completely freaked out. I would be more calm and just kinda like “Okay, we’re going to get through this.” And then, you know, I would be then freaked out and he would be calm as well. Luckily we’re never in the same cycle together.”

“But we had never – we’d never prayed so hard, I think, ever…EVER together,” Justin said.

CBNNews.com reported in June of 2014, they said goodbye to their families in Boise, Idaho, and boarded their flight to Paris, France. With them was a film crew, documenting their journey to raise awareness for Justin’s disease. Two days later, as they made their way up the Pyrenees Mountains, reality set in.

“My wheelchair weighs about 250 pounds with me in it and the weight of gear and-and the chair itself and whatnot, so it’s quite, it’s quite heavy and it’ll pull you straight down – straight down a hill, and it’s very slow-moving going up,” said Justin

“There were moments where we literally thought, ‘This might be it for the day.’ Like I – ‘we’re done,’” said Patrick.

But as only good friends can, they kept each other going.

“The dynamics that we just kinda just embraced vulnerability, accountability, kind of unabashed honesty about where we’re at, what we feel. If we don’t agree with something, just throwing it all out there and being okay A) saying it; and B) being okay receiving it, has just created this-this dynamic that exists where there’s no fear. There’s no fear within our relationship. And that, I think is-is where God has really been able to mold us into kinda one unit,” Patrick said.

But their honesty and trust wasn’t the only thing that got them through the journey.

“God was with us every step of the way,” said Justin.

“Someone would show up out of nowhere. You have those call them angels and-and-and whether they’re angels or not, you know, I don’t know, but they’re people that God’s using. We met people from 27 countries. We had over 100 people help us. So at least 100 moments or periods of time where people were placed in our path for a reason,” Patrick said.

With God and the help of complete strangers, Justin and Patrick finished their pilgrimage in 35 days. Looking back, they have come to appreciate their friendship even more. For them, it’s not about sacrifice or humility. It’s about love.

Since returning from Spain, Justin and Patrick founded Push Inc  (https://www.pushinc.us)  — an organization that helps groups and individuals achieve their dreams. Together, the two have co-written their first book, inspired audiences as motivational speakers, and are eagerly awaiting the documentary aptly titled, “I’ll push you,” which will be released this October.

The author of this story, Michael Ireland, is a self-supported media missionary with ANS. Click here to support him as a missionary journalist.
June 23, 2019
FacebookTwitterPinterestEmail