MIDLAND, TX (ANS) — The Wall Street Journal recently published an article titled “A Christian Congregation Fled Xi Jinping’s China, but Escaping Control Had a Price” that follows a persecuted Chinese church who fled to Jeju, a South Korean island, in hopes of gaining asylum, but have faced harassment and an ongoing fear of repatriation to China. 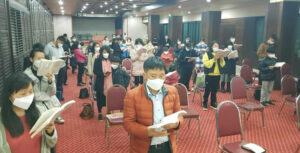 The report  https://tinyurl.com/uze97ska  covers a group of 28 adults and 32 children from Shenzhen Reformed Holy Church (RHC) led by Pastor Pan Yongguang who began arriving over a couple of months in Jeju from China after enduring religious persecution by the Chinese government. The group began working through the immigration system in order to seek protection and asylum in the Republic of Korea. All, including the children, have been denied at least once and are appealing the decision.

In a media release, ChinaAid says: “It is gravely concerning that church members seeking asylum have begun to receive calls they interpret as warnings to return to China. These calls came from people claiming to be with the local Chinese consulate and others directly from South Korea’s consulate in Guangzhou. Likewise, a church member who had attempted to go to Jeju in 2019 with the group but was denied entry, was taken for interrogation by Chinese Ministry of State Security agents, many of her belongings confiscated, and told to no longer contact the group in Jeju.”

“This is a modern ‘Mayflower’ exodus story. The emergent exile of the whole congregation of the Shenzhen Shengdao Presbyterian Church shows religious persecution has been rapidly deteriorating in Communist China,” said Dr. Rev. Bob Fu, a close friend of the church.

“We know the church members, including 32 children, have been facing constant threats from China and the absolute unreasonable rejection of asylum protection applications by the South Korean government. We appeal to the Biden Administration to immediately work with allies in Asia to ensure the congregation’s safety from repatriation and to resettle these credibly persecuted church members into the US as refugees.”

The Shenzhen Reformed Holy Church (RHC) was established in 2012 with Pastor Pan Yongguang as the founder and senior pastor. It is now recognized as one of the most important leading churches for China’s urban independent house church movement.

ChinaAid is committed to walking with these persecuted church members and others like them in securing asylum and safety for those who flee China due to ongoing persecution by the Chinese Communist Party due to their religion.