Top Posts
Colorado football coach Sanders’ unabashed faith
There’s A Light That Enters Houses With No...
Knowing the One Who Always Keeps His Word
Pregnancy Resource Centers Fight For Life Amidst Opposition
This World is Not Our Home
Lessons Learned From a Gingerbread House
Let There Be Peace on Earth
‘I Wanna Dance’ movie: Whitney Houston’s success and...
Fact Finding, Sight Seeing, and Prayer Walking
Kidney donation led to 8 life-saving surgeries
Home Tags Posts tagged with "Shirley Boone" 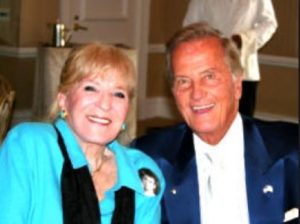 Shirley and Pat Boone had been married for 65 years. (Photo: Dan Wooding)

People Magazine reports she passed away at the Boone’s home in Beverly Hills, California.  She had been suffering from vasculitis for less than a year.

The Boones had been married for 65 years.

As she passed from this life to the next, Shirley was surrounded by her husband and their four daughters, Cherry, Lindy, Debby, and Laury, who were by her bedside singing hymns to her, according to the magazine.

CBN News reported in December that Shirley’s health was fading.  Author and Christian minister Shawn Bolz said the Boones have been a force for God in the entertainment industry.

Behind the scenes, they have led some of the most famous people in entertainment and music to know Jesus as their Lord and savior. Shirley and Pat have welcomed hundreds of people into their life and world and have been spiritual parents and gatekeepers in the entertainment industry. They have hosted more events, Bible studies, and prayer meetings at their house than probably anyone else in Beverly Hills in history,” Bolz explained.”

Friends of the family have requested prayers for Pat and the Boone family.

Susan Stafford, former host of Wheel of Fortune, said: “After a lifetime of dedication to her husband, Pat Boone, Shirley is now with the Lord she loved so much.  With Pat and their 4 daughters at her bedside, she passed peacefully into Eternity today.

“Since Thanksgiving, I’ve had to say goodbye to 12 friends.  While some were closer than others, Mama Shirley was my mentor and my treasured sister in Christ for almost 5 decades. I’m most grateful she’s no longer suffering — however, we will always miss her sweet smile, her tender heart and her continual prayer support.  Please pray for her family and especially Pat who adored his wife of 65 years.  As one person said, Shirley is no longer in pain, but Pat will be for some time.  Saying goodbye to so many causes us to focus on what is important in this life so we can be prepared for the next.  Eternity is forever, it just happens to begin on earth.”

People Magazine went on to report Shirley passed away peacefully on Friday morning at the pair’s home in Beverly Hills after suffering complications from vasculitis, which she had contracted less than a year ago.

In her final moments, Shirley was surrounded by her husband of 65 years and the couple’s four daughters, Cherry, Lindy, Debby and Laury, all of whom were by her bedside singing hymns to her as she passed.

Following her death, Pat, 84, told PEOPLE that he intended to meet his longtime love again.

“I’m very confident of that,” Pat added. “That took the sting out of what happened today because we know we’re gonna be together again and have a whole new beginning.”

Pat and Shirley began their love story at 16-years-old. “We were very much in love,” Pat revealed.

It wasn’t until they were 19 when Shirley’s family planned to move away, that Pat realized it was time to ask her father — country singing legend Red Foley — for permission to marry Shirley.

“He tearfully asked me one thing, ‘Will you take care of my girl?’ and I said I would,” Pat explained. “And the tears rolled into his coffee because he knew he was moving and planned to take her with him, but he was willing to leave her with me.”

In November 1953, the pair eloped and then settled in Teaneck, New Jersey, where they welcomed their four daughters in five years.

They eventually moved to Beverly Hills together, where they resided for more than 50 years, watching their four children, 16 grandchildren, and ten great-grandchildren grow up.

“The thing that would most fulfill her was to be a good wife, and mother, and grandmother and to create happy homes,” Pat said of his wife, noting that the pair would often take “second or third honeymoons” together on ocean voyages.

In addition to being by her sweetheart’s side for more than half a century, Shirley was also a best-selling author, recording artist, television hostess, and humanitarian.

Shirley was well-known for starting a billion-dollar Christian ministry. The couple’s Christian faith was also a contributing key factor in what drove their marriage to last for so long.

“We didn’t have the perfect marriage, but it helps to marry a magnificent woman,” Pat tells PEOPLE. “You make your commitments to God and each other, and in troubled times, you hang on to the commitment to God, and to your kids. You see the problems through and you find you’re stronger because of it.”

Part of her passions were also focused on giving back to others, which she first did through an organization she created called Save the Refugee.

Shirley, along with ministers and other humane organizations, raised over a million dollars in a week’s time, sending food and medicines over to Cambodia to assist with the hunger crisis. Their organization eventually morphed into Mercy Corps, now one of the most prominent worldwide hunger relief organizations.

“[Mercy Corps] continues to grow, and all of this started from her tears and her conviction that we could do something,” Pat said. “She was always ready to interrupt what she was doing and help somebody else.”

And that desire to give back was one of the things Pat says he will remember most about his wife.

“She had an honest, deep, earnest love for people and her desire to help people as activist,” he said. “She was so easy to love because she loved so easily and so naturally.”