Top Posts
Knowing the One Who Always Keeps His Word
Pregnancy Resource Centers Fight For Life Amidst Opposition
This World is Not Our Home
Lessons Learned From a Gingerbread House
Let There Be Peace on Earth
‘I Wanna Dance’ movie: Whitney Houston’s success and...
Fact Finding, Sight Seeing, and Prayer Walking
Kidney donation led to 8 life-saving surgeries
The Power of Curiosity
When Love Came Down at Christmas
Home Tags Posts tagged with "Since Time Immemorial curriculum" 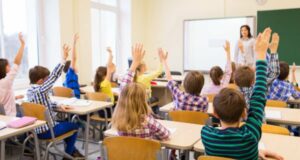 Children are learning to equate Native American history with the Palestinian plight.

Children as young as 10 are being taught to associate the Native American experience with the Palestinians’ “fight to be free from Israeli dominance,” according to an article by Jonah Cohen, www.JNS.org , communications director for the Committee for Accuracy in Middle East Reporting and Analysis (www.CAMERA.org) as reported by World Israel News https://worldisraelnews.com

Cohen reports the lesson is part of an otherwise informative Native American curriculum called Since Time Immemorial: Tribal Sovereignty in Washington State, which was developed by the Tribal Leaders Congress on Education, the Washington State School Directors Association and the Office of Superintendent of Public Instruction.

Subsequently, the curriculum was approved by all 29 federally recognized tribes in Washington State. It has since been widely used in K-12 public schools after state legislation in 2015 required the teaching of Native American history.

The bizarre inclusion of the Israeli-Palestinian conflict seems to be at odds with the curriculum’s self-described “place-based approach,” in which teachers and students are supposedly encouraged to focus on “the context of tribes in their own communities.”

“Unfortunately, we’re finding this sort of politicization of Israel in public schools across the United States,” said Steven Stotsky, who investigates bias in K-12 education for the CAMERA International Student Leadership Institute.

“In this case, I find it particularly troubling that the curriculum is being used by anti-Israel activists to divert attention away from Native American history,” Stotsky said. “It’s as unfair to Native Americans as it is to Jews. And ultimately, it’ll damage the credibility of the entire curriculum, as people figure out what’s going on.”

“The Israeli-Palestinian conflict is not the focus of the lesson,” a school official from the Washington State’s Office of Native Education wrote in an email in response to questions about the curriculum.

Cohen says that although it is not the main focus, an assignment about Native American revolts against European encroachment tells students that the Israeli-Palestinian conflict is a useful “contemporary connection” for understanding the Indian Wars for Independence.

The assignment uses leading questions to teach that, like Native Americans, the Palestinians are struggling to have “their sacred homelands returned to them.”

Cohen writes that while it is true that most Palestinian Arabs likely view their uprisings in that way, the ancient and unbroken Jewish residence in these same sacred lands is omitted from the lesson.

“There is no mention of the evidence of Jewish indigeneity or the need for a sovereign Jewish homeland in the often violently intolerant Middle East,” he said.

He writes that the assignment’s language indicates that students will never hear anything about the archaeological and textual discoveries that place the Jewish people in the land more than a millennium before the Arab Islamic colonial incursions.

“Nor will students learn about the Jewish majority in Jerusalem dating back to the 1800s, or the genetic evidence indicating that most of the world’s Jewish population can be traced to the Levant.

“Perhaps most disturbingly, the centuries-old oppression of Mizrahi Jewish communities in the Arab world, culminating in their brutal ethnic cleansing in the 20th century, is also left out. Nearly 1 million refugees were compelled by these anti-Semitic atrocities to find refuge in Israel.”

Cohen adds that since students do not receive the above information in the Since Time Immemorial curriculum, those who complete the assignment will likely come away from it with two notions: first, that Israelis are analogous to Europeans who overran another people’s territory; and second, that the ethical position is to side with the indigenous Palestinians in their fight to reclaim their sacred homeland from Jewish usurpers.