Top Posts
There’s A Light That Enters Houses With No...
Knowing the One Who Always Keeps His Word
Pregnancy Resource Centers Fight For Life Amidst Opposition
This World is Not Our Home
Lessons Learned From a Gingerbread House
Let There Be Peace on Earth
‘I Wanna Dance’ movie: Whitney Houston’s success and...
Fact Finding, Sight Seeing, and Prayer Walking
Kidney donation led to 8 life-saving surgeries
The Power of Curiosity
Home Tags Posts tagged with "SoCal Harvest 2019"

ANAHEIM, CALIFORNIA (ANS) – SoCal Harvest is celebrating its 30th anniversary of holding crusades in Southern California the same way it did after its first crusade in 1990: with thousands of changed lives.

The three-night outreach event drew 100,000 people to Angel Stadium, where they enjoyed performances by Grammy Award and Dove Award-winning artists, fireworks, celebrity guest appearances and a military appreciation ceremony. But the highlight of the weekend was Greg Laurie’s nightly presentation of the gospel.

Each night he invited attendees to make a profession of faith, and each night thousands responded.

As the sun set over Angel Stadium on Sunday, 3,852 people had gotten up from their seats and walked onto the field to make a public profession of faith, bringing the total number of decisions to follow Jesus throughout the weekend to 8,677. 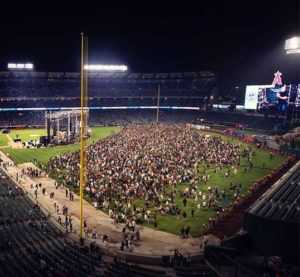 Attendees respond to Laurie’s gospel invitation at the second night of SoCal Harvest.

The SoCal Harvest crusade saw 8,677 people give their lives to Christ over the three-night event held over the weekend.

Greg Laurie, senior pastor of the Harvest Christian Fellowship in Riverside, Calif., said it was an amazing experience with more than 100,000 people total attending the crusade held in Angel Stadium in Anaheim.

The first night of the event brought 28,000 to hear the gospel, including a declaration of faith by 2,100 people. The second night of the SoCal Harvest drew 34,000 people along with 2,675 professing their faith in Jesus Christ.

The number of people attending rose to 38,000 on the final evening of the crusade with more than 3,895 professing their faith in Christ.

People could be seen with tears in their eyes, while worshipping and praying during each night of the event.

“Welcome to the family of God,” read the scoreboards at Angel Stadium as fireworks lit the evening sky in celebration.

Laurie, who this weekend focused his messages on the theme of hope, delivered a message titled “Happiness, Hope and Heaven.”

“Hope has a name, and it’s Jesus Christ, and he is here with us tonight, and he is ready to change the course of your life,” Laurie said.

Earlier in the evening, Laurie interviewed MLB All-Star and World Series Champion Darryl Strawberry, who shared about his upbringing in a home with an alcoholic father, successful baseball career and struggles with substance abuse and addiction.

At the lowest points in his life, Strawberry was sentenced to time in jail and sent to rehab, but upon being released, he met his wife Tracy who helped him find faith in Jesus.

Speaking of his struggles, Strawberry said, “Whatever is killing you, Jesus already killed it.”

On opening night, Harvest honored military members with a special ceremony that included a U.S. flag unfurled across the stadium’s field as Brennley Brown, finalist of The Voice, sang “God Bless America.” Former Navy SEAL and Actor Remi Adeleke and Actress Madeline Carroll of the smash hit “I Can Only Imagine” offered opening prayers. Laurie also interviewed film director Jon Erwin along Jeremy Camp about “I Still Believe,” a new film about Camp’s life that is coming out in March.

SoCal Harvest 2019 also was the kick-off event of Harvest’s 2020 Vision to launch a “Jesus Revolution” through crusades in Southern California and Boise, Idaho. The tour will end with a crusade in 2021 at Los Angeles Stadium at Hollywood Park, currently under construction. The Harvest team wants to reach more than 1 million people and see 100,000 professions of faith through the crusades.

“I keep doing these crusades year after year because I want to take as many people with me to heaven as I possibly can,” Laurie said.

Laurie is an American author and evangelist who serves as the senior pastor of Harvest Christian Fellowship in Riverside, California, Harvest Church at Kumulani in Kapalua, Hawaii, and Harvest Orange County in Irvine, California.

Laurie’s latest book, “Johnny Cash: The Redemption of an American Icon,” releases in August. You can learn more about Greg Laurie and Harvest at www.harvest.org .