Top Posts
Colorado football coach Sanders’ unabashed faith
There’s A Light That Enters Houses With No...
Knowing the One Who Always Keeps His Word
Pregnancy Resource Centers Fight For Life Amidst Opposition
This World is Not Our Home
Lessons Learned From a Gingerbread House
Let There Be Peace on Earth
‘I Wanna Dance’ movie: Whitney Houston’s success and...
Fact Finding, Sight Seeing, and Prayer Walking
Kidney donation led to 8 life-saving surgeries
Home Tags Posts tagged with "SoCal Harvest"

IRVINE, CA (ANS – Aug. 11, 2018) — A billboard advertising California Pastor Greg Laurie’s Harvest outreach, that has been held for nearly three decades and draws roughly 100,000 people every summer, has been taken down over reported complaints and an alleged threat. 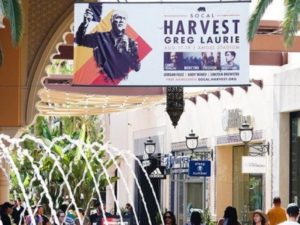 CBS Los Angeles reports the ad for SoCal Harvest – formerly known as the Harvest Crusade – featured an image of Pastor Greg Laurie of Riverside’s Harvest Christian Fellowship with a microphone in one hand and an untitled book in the other.

It went up at Fashion Island in Newport Beach on July 19 until it was removed by the mall’s owner, Irvine Company on Aug. 3, according to the Orange County Register.

Harvest Executive Pastor John Collins told the Register the church was told the move was blamed on “complaints [Irvine Co.] had received and there was a threat that they had received.”

Newport Beach Police Sgt. Peter Carpentieri told the Register police were “not aware of any threat regarding the Harvest ad being reported to the department.”

A similar ad that was on display at the Irvine Spectrum – also owned by Irvine Co. – was taken down and the church was refunded for the ad. 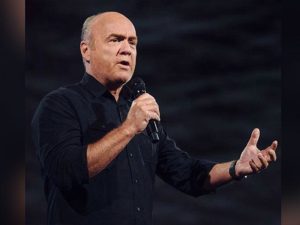 In a blog post Tuesday titled “For Some, the Bible Is Offensive,” Laurie explained the image was inspired in part by old photos of Dr. Billy Graham.

He also confirmed that the book depicted in the billboard was intended to be seen as the Bible.

“If you look closely at the book I am holding up, it does not say ‘Bible.’ There is no cross on it. Yet, the image of someone holding a book up is now offensive to some. (It is indeed a Bible.)”, Laurie wrote.

Despite the move by Irvine Co., Laurie says he “enjoyed working” with them and “hope[s] to work with them in the future.” 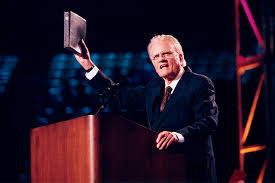 In this photo, Dr. Billy Graham is seen holding up a Bible.

CBNNews.com reported Laurie and Harvest Crusade contracted Irvine Company, a real estate company in Southern California, to advertise the upcoming SoCal Harvest, to be held August 17-19 at Angel Stadium and expected to draw tens of thousands of people. The company agreed to post large billboards promoting the crusade at Fashion Island, a prestigious outdoor mall in the center of Orange County.

However, after claiming the religious imagery on the ads provoked multiple complaints, including a “serious threat,” the Irvine Company mandated the billboards be modified. Harvest complied with the request and resubmitted new ad artwork without the image of the Bible. Ultimately, however, the changes were not enough to resolve the situation as the Irvine Company decided to completely remove all the advertisements and billboards for the crusade.

There was nothing overtly religious about it,” John Collins, Harvest Executive Director told CBN News.

The Bible depicted in Laurie’s hand did not have a cross, religious symbols, or even the word “Bible” on it.

“We changed it to a more simplified ad that simply said ‘Harvest,’ giving the dates and some of the musical artists that are going to be with us. Then they came back and said they just wanted the ads completely removed and they refunded us,” he explained.

CBN News said it attempted to contact Irvine Company officials for comment on this story, but did not receive a response back prior to publication. However, the contract between the business and Laurie reads, “Management reserves the right to not display any materials that could be constructed as vulgar or offensive.”

“We’re certainly not upset with The Irvine Company. Obviously, they’re catching heat for allowing us to run these ads. We feel it is just unfortunate that people are complaining,” he emphasized. “It’s sad that our culture is at this degree of intolerance…There’s such intolerance against Christianity that we aren’t allowed to state that or to publicly advertise this event. That’s amazing.”

Collins said the billboards were simply meant to invite people far and wide to an event that could change their lives. This year is the 29th anniversary of SoCal Harvest, making it the longest-running large-scale evangelistic event in America’s history.

This year, the SoCal Harvest team will be holding food drives for needy people at home and abroad.

“There’s many positive things that occur throughout the weekend and we’re just mystified that we can’t advertise this event,” Collins said. 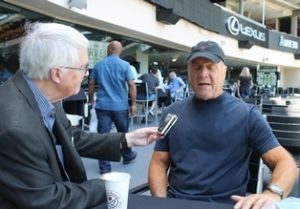 ANS Founder, Dan Wooding, who until this year’s move back to the UK, has reported on every one of Laurie’s SoCal outreaches, as well as working as a writer at many of Billy Graham’s overseas crusades, said, “This is eerily similar to many of Billy’s crusades where there were so many attempts to either stop or hinder his crusades, and like this one, the publicity seemed to attract even more people to attend the meetings. So, in many ways, I am sure that more people will now go to the SoCal Harvest Crusade and learn from the Bible that was supposed to be offensive.”