Top Posts
There’s A Light That Enters Houses With No...
Knowing the One Who Always Keeps His Word
Pregnancy Resource Centers Fight For Life Amidst Opposition
This World is Not Our Home
Lessons Learned From a Gingerbread House
Let There Be Peace on Earth
‘I Wanna Dance’ movie: Whitney Houston’s success and...
Fact Finding, Sight Seeing, and Prayer Walking
Kidney donation led to 8 life-saving surgeries
The Power of Curiosity
Home Tags Posts tagged with "Sri Lanka Bombings"

WILLS POINT, TEXAS (ANS) – As the death toll from the Sri Lanka church and hotel bombings nears 300, the founder of a multi-faceted missions movement to the Southeast Asia region has denounced the attacks, and another ministry working in the region has appealed for help with victims. 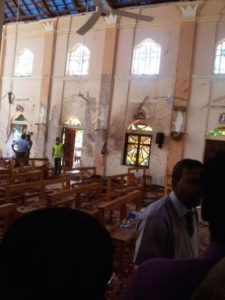 The Easter Sunday attacks on eight churches and hotels that killed nearly 300 people in Sri Lanka were aimed at large gatherings of people across the nation and intended to intimidate and sow fear, according to Gospel for Asia.

“It’s clear that churches were targeted because the terrorists knew more people would be gathered there on Easter Sunday to worship,” said Dr. K.P. Yohannan, founder and director of Gospel for Asia (GFA).

In a stamenrt released to Christian media, Yohannan said: “The hotels were attacked because they knew foreigners were gathering there, and they would be able to kill the maximum number of people at once. Their goal was to inflict as much pain as possible in order to incite fear in the hearts of everyone around on the holiest day on the Christian calendar.”

The first three blasts occurred about 8:45 a.m. during Easter mass at three churches in various locations.

Two dozen members of the group were arrested after the bombings and authorities continue to find bombs and explosives throughout the capital city of Colombo including locations near GFA churches. Islamic State claimed responsibility for the attacks.

Declaring a state of emergency, government officials implemented a second night of a dusk-to-dawn curfew in Colombo, according to the New York Times and GFA field reports.

“Even though churches led by GFA-supported pastors are safe and were not specifically targeted by the terrorists who planned and orchestrated the mass bombings, ministry-supported workers on the field are doing all they can to be part of the healing and restoring of these communities,” Yohannan said.

GFA’s ministry has served for many years in Sri Lanka through national workers that distribute aid in the name of Christ.

A year after GFA-supported workers distributed schoolbags to children who lost school items in a previous flooding, Yohannan’s visit symbolized the ongoing mission to Sri Lanka maintained by GFA. The organization also distributed aid after a region-wide tsunami battered Southeast Asia in 2004, and after heavy flooding in 2010 and 2011.

In addition to providing relief supplies, the organization maintains ongoing work in Sri Lanka.  GFA-supported Bridges of Hope centers are having a significant impact on children whose families have been devastated by 26 years of civil war.

One center in the northern part of the country is home to 120 children who have lost one or both parents to war. GFA also supports Women’s Fellowships where women learn about God’s Word, pray and reach out to their community in a variety of ways. GFA also supports radio broadcasts and other ministries in Sri Lanka.

The organization said such ministry is vital in this nation of 21 million, located in the Indian Ocean just off the southeast tip of India.

“I ask for your prayers and support, that the people of Sri Lanka may find strength in God’s grace as they move forward,” Yohannan said, adding:“Please join us in praying that during these pain-filled days ahead, our brothers and sisters on the field would be the healing hands of Jesus to a broken and hurting people.”

In 2018, this included more than 70,000 sponsored children, free medical camps conducted in more than 1,100 villages and remote communities, over 4,700 wells drilled, over 11,400 water filters installed, income-generating Christmas gifts for more than 240,000 needy families, and spiritual teaching available in 110 languages in 14 nations through radio ministry.

Meanwhile, The Palaam Project told ASSIST News that following the bombings in Sri Lanka, all their staff and the people they are connected to have not been affected in any way.

In an email to ASSIST News, the group said: “We are however very concerned about the present safety of our churches and schools across the country and would therefore ask that you pray for protection over all that we are doing, over our staff, church members and leadership teams, children and families from our schools and all those who are connected to us.

“Join us as we pray for peace and security in Sri Lanka — amongst all peoples, tribes and tongues.”

The Palaam Project said they are receiving lots of requests from people who want to donate to assist the families of victims.

“The Palaam Project team is looking into ways in which we can actively assist these families.

“If you would like to make donations, please do contact us and we will direct you to ways of doing this. We will send out updated information regarding this as soon as we can. Thank you for your prayers and concerns for Sri Lanka at this time of sudden loss.”

To join GFA’s prayer effort for Sri Lanka, the public is invited to visit: https://www.gfa.org/pray/sri-lanka/ .