Top Posts
Knowing the One Who Always Keeps His Word
Pregnancy Resource Centers Fight For Life Amidst Opposition
This World is Not Our Home
Lessons Learned From a Gingerbread House
Let There Be Peace on Earth
‘I Wanna Dance’ movie: Whitney Houston’s success and...
Fact Finding, Sight Seeing, and Prayer Walking
Kidney donation led to 8 life-saving surgeries
The Power of Curiosity
When Love Came Down at Christmas
Home Tags Posts tagged with "Steiger’s No Longer Music"

WHEATON, ILLINOIS (ANS) – Steiger’s ‘No Longer Music’ (NLM) team is currently at the Steiger International Center in Germany preparing for the first leg of the summer tour that begins in Poland this Saturday.

Steiger is a worldwide mission organization that is called to reach and disciple the Global Youth Culture for Jesus. Steiger’s No Longer Music performs dramatic presentatuions of the Gospel message around the world aimed at reaching today’s Global Youth Culture. 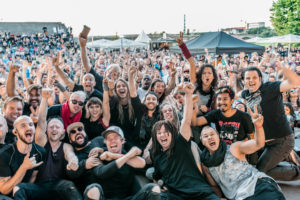 Steiger’s No Longer Music Team pictured in front of concertgoers

According to its website, Steiger raises up missionaries and equips the local church to proclaim the message of Jesus in the language of the Global Youth Culture and establishes long-term presence in cities through ongoing outreach, discipleship and local church partnership.

The site says: “The current urban generation, connected by consumerism, social media, and the entertainment industry forms the largest global culture ever to exist. It spans the globe, sharing the same values, listening to the same music, watching the same movies, and sharing the same posts.”

It adds: “This global culture is largely influenced by one predominant worldview: Secular Humanism — God is irrelevant, and man is at the center. In this relativistic culture, we are god and consumerism is our religion. This is a generation that does not look to the church for answers but believes it to be a dead and empty tradition of the past. Either there is no God or, if he is there, he doesn’t interfere with our lives.

“God’s heart is broken for this lost generation. The message of his love, the Gospel, is for everyone, and it is not right that young people today don’t get to hear because we’re not making it accessible to them. They don’t come to us, so we need to go to them. As Jesus’ church, we need to realize the massive change in mindset and lifestyle and the need for a paradigm shift in missions.”

Steiger’s calling is to challenge the status quo of the predominant secular humanist worldview and unmask its oppressive nature. “We lift up the Cross outside the church and see the message of a loving God, revealed in Jesus, infused in this globalized culture. We desire to see this generation find hope and purpose again as it meets the Creator. And through this, God will radically and eternally change the world.”

Steiger’s story began in 1983 in Amsterdam, at the height of the European punk rock movement. There, David and Jodi Pierce began a Bible study on a barge known as Steiger 14 behind the Central Train Station, reaching the city’s punks and anarchists.

Shortly after, David started a band called No Longer Music (NLM), as a tool to communicate the Gospel of Jesus to these young people who would never step foot in a church.

Over the years, NLM has served as a pioneer, going into previously unreached or difficult to reach places, and has been the catalyst for a worldwide movement. This has led to the creation of ministries, the planting of new churches, and the surging rise of a wave of Jesus followers who are passionate about bringing Christ’s love to those who would not otherwise experience it.

In 2003, in response to the need to raise up the next generation of radical missionaries, imparting to them the lessons and principles learned in over 20 years of front-line ministry, Jodi Pierce started the Steiger Missions School. As a direct result, a worldwide missions organization focused on reaching the Global Youth Culture was born.

2010 marked Steiger’s purchase of a large multi-building compound in a small town called Krögis in the East German countryside. The facility was converted into Steiger’s International Center, becoming home to the Steiger Missions School.

Come&Live!, a ministry with the mission of provoking and inspiring artists to proclaim the revolutionary message of Jesus outside the Church, joined forces with Steiger International in 2014. Come&Live!’s vision is to raise up 100 artists who are proclaiming the Gospel to one million people every year.

Today, Steiger has over 80 missionaries, 400+ team members and a great variety of ministries effectively reaching the Global Youth Culture in over 20 countries around world.

“For the first time since 2012, we’ll be returning to Finland, where our Steiger City team is organizing our shows. Many of the countries we are working in on this tour have small evangelical churches, so it can be a real challenge for them to prepare everything for us,” said David Pierce, founder of Steiger and NLM.

“On this section of the tour, NLM will also be performing in the Baltic states of Estonia, Latvia, and Lithuania, and we’re very excited to return to this area. Pray that a possible prison concert on May 20 in Lithuania would be confirmed. We have also had two shows fall through, and are now looking at different options in other cities. Pray for the right opportunities to open up quickly!”

Pierce said there are some new and amazing visual effects in the NLM show this year. “Unfortunately, we have been experiencing some difficulties with the angel wings and the guitar that shoots fire. Please pray we can resolve these complications quickly.”

Pierce also asked for prayer for good weather for the shows, as May in Eastern Europe is not the warmest, sunniest time of year. “Our time of preparation in Germany has been very cold and rainy, but we praise God for a break in the weather that allowed us to do all of the light programming,” he said.

He also said: “Pray for the Holy Spirit to go before us and prepare the hearts of the global youth. We want to see God’s power in the Baltic countries like we saw last year on our Colombia tour. Pray for wisdom on how to preach after each show and that God will keep away those who could distract people wanting to respond to the Gospel!”

He concluded: “Also ask God for local believers to establish strong relationships with newly interested young people after the concerts.”