Top Posts
Colorado football coach Sanders’ unabashed faith
There’s A Light That Enters Houses With No...
Knowing the One Who Always Keeps His Word
Pregnancy Resource Centers Fight For Life Amidst Opposition
This World is Not Our Home
Lessons Learned From a Gingerbread House
Let There Be Peace on Earth
‘I Wanna Dance’ movie: Whitney Houston’s success and...
Fact Finding, Sight Seeing, and Prayer Walking
Kidney donation led to 8 life-saving surgeries
Home Tags Posts tagged with "stereotypes" 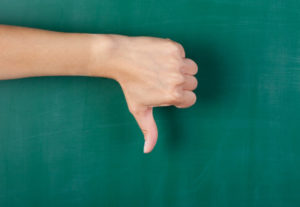 Rejection hurts. We’ve all experienced it. Whether large or small, rejection can create an emotional wound affecting us for the rest of our lives, if we allow it.

“But first the Son of Man must suffer terribly and be rejected by this generation”—Luke 17:25 (NLT).

Opening the email from a magazine, my heart raced. Had my devotional been accepted for publication?  I was feeling confident until I read their rejection. After reading the form letter, including a long list of possible reasons my submission had been rejected, I sighed.

Rereading the email, I frowned as I questioned their responses. The letter included 13 reasons why my meditation might have been rejected; however, only three examples were cited in their general guidelines of acceptance.

Why had my writing been rejected? I knew my writing inspired because of reader responses received during my 14-plus years of writing for publication. I reread my submission. Then, I returned to the email and studied the magazine’s possible reasons for rejecting my submission. To my surprise, the pain of rejection lessened. I now understood why. I’ve decided, however, to submit another entry in the future.

Yes, rejection hurts. We’ve all experienced it. Whether large or small, rejection can create an emotional wound affecting us for the rest of our lives, if we allow it.

For years, I carried the wounds of being cast into a stereotype. As a child, I was what people today would call a nerd. I wore glasses with soda-bottle-thick lenses, and I always had my nose in a library book. I wasn’t athletic or especially talented at anything the world seemed to value. While I had friends, none of us were part of the “in” crowd.

I carried the invisible scars for over four decades, until I met the One who loves and accepts me just as I am. I’d accepted Jesus as my Savior when I was a teenager, but I’d never allowed Him to be the Lord of my life.

In my attempts to “fit in,” I’d said and done things during my 40 plus years that left me ashamed and feeling unworthy. But that changed at age 47 when I reached out to Christ. He didn’t reject me. Instead, His amazing grace brought healing and a new beginning.

If anyone understands the pain of rejection, it’s Jesus. He was even rejected by those in His hometown of Nazareth. Can you imagine returning where you grew up and being rejected in the house of worship where you spent many Saturdays as a kid?

After Jesus stands to read a famous Messianic passage from the Prophet Isaiah, the Jewish leaders are astonished when He identifies Himself as the One spoken of by Isaiah. In Matthew 13:54-58 we read, “And coming to his hometown He taught them in their synagogue, so that they were astonished, and said, ‘Where did this man get this wisdom and these mighty works? Is not this the carpenter’s son? Is not his mother called Mary? And are not his brothers James and Joseph and Simon and Judas? And are not all his sisters with us? Where then did this man get all these things?’ And they took offense at him.

“But Jesus said to them, ‘A prophet is not without honor except in his hometown and in his own household.’ And he did not do many mighty works there, because of their unbelief.”

Even though He’d prophesized it, the ultimate rejection for Jesus came from His disciples, the ones He’d chosen to follow Him. Even the Apostle Peter denied knowing Him three times.

People today still reject Jesus. But that doesn’t stop His pursuit of us. Out of His great love for mankind, Jesus suffered a bloody, painful, degrading death on the cross. He loves us that much.

Psalm 103:12 says, “As far as east is from west—that’s how far God has removed our sin from us.” That’s not rejection. That’s redemption.