Top Posts
There’s A Light That Enters Houses With No...
Knowing the One Who Always Keeps His Word
Pregnancy Resource Centers Fight For Life Amidst Opposition
This World is Not Our Home
Lessons Learned From a Gingerbread House
Let There Be Peace on Earth
‘I Wanna Dance’ movie: Whitney Houston’s success and...
Fact Finding, Sight Seeing, and Prayer Walking
Kidney donation led to 8 life-saving surgeries
The Power of Curiosity
Home Tags Posts tagged with "Stevo Jeter"

Listen! The Importance of Radio Communication 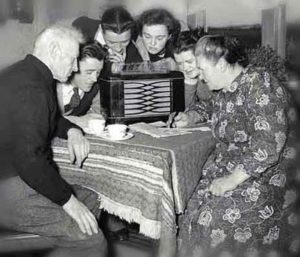 ALBUQUERQUE, NEW MEXICO— Do people still listen to the radio?  According the News Generation, they do.  Here’s just a few stats to point out [1]:

So, yes, people do listen to the radio.  And it appears a large percentage of people do.  Why?  I think there’s three main reasons:  culture, convenience, and its cost-effective. First, radio is ingrained in our culture—a means we glean information and entertainment, affording us a survey of our civilization and life. Two, it’s convenient. Simply press an on button and presto, it’s there (of course behind the scenes–in a radio studio and transmission towers– there’s lots going on)! But generally, there’s no CD’s to flip through, Podcasts to locate, or internet service to wait for.  Third, it’s cost effective—at least the old AM/FM radio.  In the end, listeners pay for a radio, electricity or batteries. And many portable radios are fairly cheap. In short, radio is a convenient and cost-effective way to bring communication to a community, the wonder of sound waves to the world. 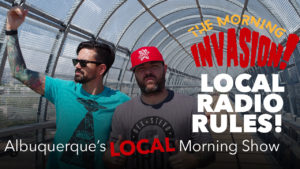 I’ve been privileged to be on the radio for years.  Most recently on Star 88 FM in Albuquerque, New Mexico sharing a broadcast with Stevo Jeter and Dex Toth.  The program is named 3 Degrees; it’s part of the Morning Invasion daily show.  On 3 Degrees we cover historical events and personages of interest. Each 3 Degrees broadcast is sort of an On This Day type program [2].

In addition to listener participation via social media and phone-calls during 3 Degrees, we ask people to type or hand write a letter to us.  In response, we type back to them a letter on a 1960’s Smith-Corona Electra 120 typewriter, homage to journalism of yesteryear.  We receive great letters, feedback, and input.  If one thing rings true, the Morning Invasion elicits camaraderie, people regularly engage and respond to the content on the show.  To put it another way, Star 88 has a radio family; radio creates community. 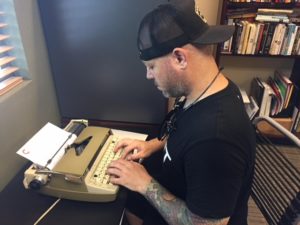 Dex typing on a Smith-Corona Electra 120

Recently our team received a letter from one of our radio family members.  It read, in part, “I love you all.  Thank you so much for all you do.” The letter was from a listener named Cruces Mike.  The “all you do” quote was in reference to the amazing radio staff. Mike was writing thanking Star 88 personnel for their work, sending fun gifts (Zebra Cakes, candy, and photocopies of tea cups).  Mike recognizes that he is part of a radio family and responded accordingly—with love.

My point in this discussion is to state something obvious:  radio is important; it matters.  Radio has, since its inception, been a catalyst for communities around the world, bringing news, culture, weather, and music to listeners of all ages and socioeconomic backgrounds.  Radio can unify and uplift, alert and activate, educate and elevate. 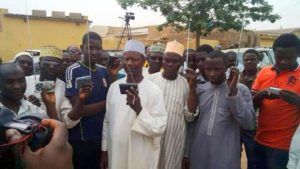 To underscore the importance of radio, Reference.com states, “Radio is important in the 21st century because it provides an opportunity for people who cannot access television and cannot read to keep up-to-date on the news and trends. Radio also provides portable entertainment and information for many; according to an American Media Services survey, 78 percent of individuals listen to radio in the car. The radio is important in both developing and fully developed countries for information provision. It is able to function when television stations are not and is more easily accessed than the newspaper is [3].”

The importance of radio continues with the type of information given: “The information that is given over the radio is able to be broadcast to a large number of listeners and provides them with instantaneous information. The radio is important for already developed countries because it not only provides news information, but it also provides entertainment…. The radio also allows people to keep up-to-date with the latest trends in popular culture” [ibid 3].

As the stats show, radio is important, with many people tuning in for news, entertainment, edification, and community. 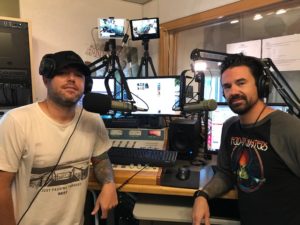 Dex and Stevo in the Star 88 Studio

Information like the above is great for radio employees, providing research showing that what they do as radio staff is meaningful and has influence.  And concerning what radio people do, I reached out to Stevo and Dex—two DJ’s on Star 88, who are the real radio guys—to discuss the importance of radio.

I begin by asking them what made you get into radio.

Stevo replies, “A really good friend of mine had a morning show and his co-host was away for Christmas. He asked me to fill in. I had zero radio experience, but he said it’d be fun because I’ve got a witty sense of humor. I seriously had no idea what I was getting into, but agreed and ended up having a blast. The GM loved it and asked if I’d be interested in turning it into a career. Been part of the station for 15 years now.”

Why is radio an important communication medium, bringing a community together?

Dex states, “Everyone is dealing with something in their life.  Everyone has a different story to tell, including us on the radio.  Being a part of our listeners lives every morning is important, not only to share our stories but to hear their stories.  It’s also important to educate our listeners on what our community needs.   We recently found out that New Mexico is number one in childhood hunger.  Currently in our state, thousands of children aren’t getting fed.  Realizing the need in our community, our audience has really stepped up to end childhood hunger in New Mexico. So, radio can be a catalyst for change in a community.” 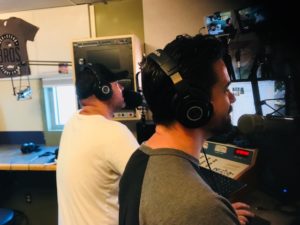 What have been some highlights for you as radio DJ’s, something that expresses why you are in the radio business?

“I started in radio when I was 18.” Dex replies, “I’m 39 now.  I think some of the biggest highlights for me is getting to see the positive impact I have had on the listeners.  So many people struggling and they tune in to escape for however long their commute is or maybe they’re listening at a job that they hate.  If I can encourage them and make them laugh, then that’s the most fulfilling for me.”

For Stevo it was assisting a hurting person.  He states, “I remember one time we got a call from someone who was  upset. It turns out he was in a really bad place in his life and woke up that morning determined to end his life. He got everything prepared and drove out with the intention of killing himself. Somehow along the way his phone started playing a podcast of ours and it freaked him out. He ended up pulling over to listen and something we said struck him so hard that he made a decision to live. When he called to let us know about his trial, I thought this is the best call we ever received.”

What does an average day look like for a radio DJ?

Dex summarizes it as, “For a morning show host, it begins by getting up at 3:30 am, and getting to work at 4:00 am; then producing the show before it starts at 6:00 am.  We’re on air from 6:00 to 10:00. I think it’s important to live life to its fullest.  I get up early and create a program to help others create experiences and help them enjoy life.  There’s a deep connection sharing your life—and vice versa—with your audience.  Again, it’s like a family.”

Stevo expands, “After the broadcast we go to our office and produce the show, getting it ready for the internet. We also do voice over work, commercials, and other production for the station.  So though we are a morning show hosts, our work doesn’t cease at the end of the show.  In some ways, it is just beginning.” 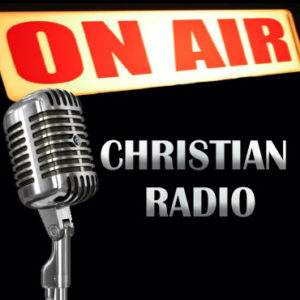 As Christian media, how important is radio to promoting the Gospel message?

“I think it’s super important..” Dex begins. “We are talking to thousands of people every day.  There are people that either don’t have a relationship with Jesus or maybe they have fallen away from God or maybe they do have a relationship with Jesus and they just need to be encouraged.  God has given us a great opportunity to share how amazing God is. And radio is a convenient way to get the gospel message to as many people possible.”

Stevo states it plainly:  “radio is one resource for renovation, but a powerful resource.  As Christian DJ’s, we count it a privilege to partner with the larger Body of Christ in telling the world about Jesus, and His love is the reason we get up each morning and encourage our community to listen about the gracious greatness of God. Sure we may joke, tease, talk about current events and be funny; but be assured: we are here because of Him.”