Top Posts
Colorado football coach Sanders’ unabashed faith
There’s A Light That Enters Houses With No...
Knowing the One Who Always Keeps His Word
Pregnancy Resource Centers Fight For Life Amidst Opposition
This World is Not Our Home
Lessons Learned From a Gingerbread House
Let There Be Peace on Earth
‘I Wanna Dance’ movie: Whitney Houston’s success and...
Fact Finding, Sight Seeing, and Prayer Walking
Kidney donation led to 8 life-saving surgeries
Home Tags Posts tagged with "Suellen Roberts"

Roberts met President Reuven Rivlin after his speech at the President’s residence in Jerusalem. A luncheon was held at the residence for the journalists afterward. 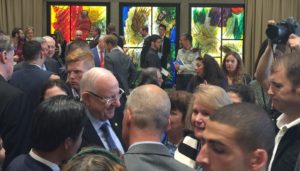 Roberts, along with representatives from thirty countries, joined the Israeli Government Press Office and Director Nitzan Chen for the three-day Christian Media Summit in Jerusalem.

The summit brought together top-tier Christian journalists, news executives, founders and CEO’s from around the globe. Leaders dialogued about key topics relevant to Israel and the Christian world. An additional goal was to foster better understanding and strengthen the friendship between Christians worldwide and the State of Israel.

Minister Netanyahu : “We have no better friends in the world than our Christian friends.”

Roberts was also a part of a historic signing of a proclamation at the Golan Heights, where corporate prayer was said over that region for the first time ever.

“This was one of the informative and inspirational conferences I have been a part of and I was honored to be included,” said Roberts.

“As we stretch our arms worldwide, Christian Women in Media’s ultimate goal is to build awareness of the importance of Israel in fulfillment of biblical prophecy and to help end anti-Semitism globally.”

To speak further to Suellen Roberts about this historic trip or find out more information about Christian Women in Media, visit CWIMA’s website at: https://cwima.org/ .

Christian Women in Media Association (CWIMA) is a professional association dedicated to connecting women in purpose and vision. With a national platform focused on impacting our culture through media, our members work in the fields of social media, film, TV, radio, publishing, music, the arts, and entertainment.