Top Posts
Knowing the One Who Always Keeps His Word
Pregnancy Resource Centers Fight For Life Amidst Opposition
This World is Not Our Home
Lessons Learned From a Gingerbread House
Let There Be Peace on Earth
‘I Wanna Dance’ movie: Whitney Houston’s success and...
Fact Finding, Sight Seeing, and Prayer Walking
Kidney donation led to 8 life-saving surgeries
The Power of Curiosity
When Love Came Down at Christmas
Home Tags Posts tagged with "Suicide Bombers"

Papka Medugu, a parishioner who witnessed the incident, told SaharaReporters on Sunday morning that suspected Boko Haram members “targeted our church while the morning mass was going on, but to God’s glory they both exploded before they could access the church.” 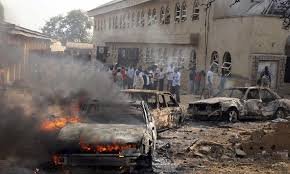 “Vigilant Catholic cadet boys on patrol around the church vicinity prevented the bombers from gaining entry into the church, thereby forcing the explosives to detonate before getting to their target,” the eyewitness said, just as he confirmed that only the two bombers were killed in the incident.

“Catholic cadets stopped them at the main entrance. The bombers arrived 30 minutes into the mass which started around 6am. When they could not access the church, they detonated, but thank God none of the cadets were hurt. Only a grandmother and her grandson were shocked by the loud bang, but they have since left the hospital,” he said.

Mamza, who doubles as Chairman of the Christian Association of Nigeria (CAN), Adamawa State chapter, further said armed military personnel were drafted to the scene within minutes of the attack and have since cordoned off the area to recover possible unexploded devices.

Shuwa village, which is about 30 minutes drive to the Sambisa stronghold of the outlawed Boko Haram sect, has witnessed series of Boko Haram incursions in recent times.

Ahmed Umar Fintiri, the candidate of the opposition Peoples Democratic Party (PDP), who is widely speculated to clinch the keenly contested governorship election is from the area.

Brigadier General Bello Mohammad of the 23 Brigade Yola has declined comments, stating that “Madagali is not within my jurisdiction.”

Meanwhile, results of the governorship and assembly elections have just started trickling in at the headquarters of the Independent National Electoral Commission (INEC) in the state.

The British High Commission in Nigeria has expressed concerns over the report of military interference in the election in Rivers State, according to Premium Times  www.premiumtimesng.com .

The commission was reacting to reports from its election observers about the tension at the collation centre in Port Harcourt.

It said the military interference in the polls is putting stress on the staff of the Independent National Electoral Commission and has made it difficult for them to carry out their duties.

According to its tweet, it said, “Extremely concerned by reports, including from @UKinnigeria observers, of military interference in the election process in Rivers State. Monitoring the situation closely @inec staff must be allowed to do their jobs in safety, without intimidation.”

There has been a heavy presence of the military in River State, which has been rocked with election violence since the presidential polls.