Top Posts
Knowing the One Who Always Keeps His Word
Pregnancy Resource Centers Fight For Life Amidst Opposition
This World is Not Our Home
Lessons Learned From a Gingerbread House
Let There Be Peace on Earth
‘I Wanna Dance’ movie: Whitney Houston’s success and...
Fact Finding, Sight Seeing, and Prayer Walking
Kidney donation led to 8 life-saving surgeries
The Power of Curiosity
When Love Came Down at Christmas
Home Tags Posts tagged with "Sumi-e"

ALBUQUERQUE, NEW MEXICO (ANS)—Sumi-e is an ancient Japanese form of ink-based art.  Sumi-e has its origins in Chinese calligraphy, derived from a scholarly cast of artist/monks. It made its way to Japan around 1000 AD. 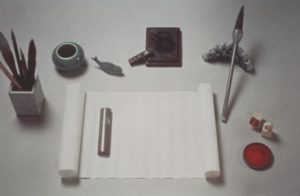 The name Sumi-e means ink picture, with sumi being the ink.  In Sumi-e there are Four Treasures: the ink, the brushes, ink stone (used to grind the minerals that make the ink), and paper.  Histrionically, Sumi-e is connected to philosophy and knowledge, revealing the details of nature.  And traditionally, Sumi-e is inspired by the environment:  trees, flowers, birds, and other ecological landscapes.  Sumi-e also incorporates human figures within the painting. 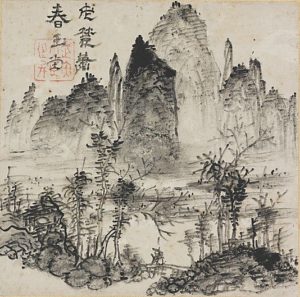 Sumi-e in Japan fosters tranquility, thoughtfulness, and celebrates creation. As implied by the artists noted above, Sumi-e is connected to poetry (Haiku).  Often, the two go together: shape and words, sharing the same creative space.

When looking at a Sumi-e paining, the viewer will notice a few things:  minimal, but flowing shape/lines, few colors (traditionally it was only black ink), an abundance of white, and natural themes.  Because of the broad swath of white used within Sumi-e painting, perspective is implied or reversed. All of these aspects are topped off by an artist stamp.

When I look at a Sumi-e painting, I see similarities with historical Christian painting, the icon (minus the colors manifest within icon).   With Eastern Orthodox icons, attributes such as line (razdelki, ozhivki, and dviczhki) and words (otmetiny) are combined to showcase a theological truth, much like Sumi-e paintings have a philosophical connection. Also, perspective is reversed. Words and images are conjoined, even if it’s just a stamp found within a Sumi-e painting.

Throughout my artistic life, I’ve been influenced by Avant-garde icons and geometrical abstraction, a means to communicate theological and philosophical ideals.  However, the past two years I’ve broadened my art to include elements found within Sumi-e painting: simple, nature-based images mixed with words and stamps. But rather than use an artist stamp, I use old business stamps and fruit stickers to provide a modern connotation—and a contemporary commentary—on the painting.  The fruit sticker incorporation may be influenced by my friend and art historian and artist, Gordon McClelland, who introduced me to fruit box labels. 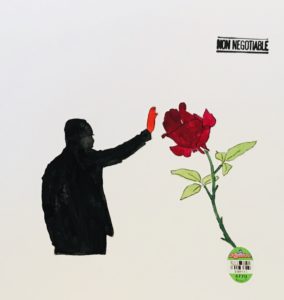 But the similarities in my recent art and Sumi-e paintings are manifest:  large use of white space, nature-based images with incorporated human portraits, stamps, and the adjoining of image and words. And rather than use ink, I use watercolor, a medium that provides a wonderful connection between Eastern and Western artistic sensibility.

The influence of Sumi-e on my work may be due to the large group of Japanese friends our family has (connection to Japan as missionaries), or it was through the music and life of Ryuichi Sakamoto, a celebrated Japanese musician I’ve followed for years—since his collaboration with David Sylvian in the 1980’s. I’m not sure how the subliminal connection occurred, but Japanese culture is prevalent in our household, and hence, my art.

The Simple Art of Sumi-E

Taking all this in mind, I’ve called this phase Nu-Me, in celebration of Sumi-e.  It’s fitting.  It’s a new style for me based in New Mexico, a land rich in art and culture.

Why this talk?  More than anything it’s a reminder to stay creative.  As followers of Christ, we believe Christ is the Creator (see Colossians 1-2), and as such is the incarnation of God’s truth, beauty, and goodness—the Icon of God, His express image (Colossians 1: 15-20).  Because of this, creativity reflects the Creator.

Furthermore, creativity is good for you.  As OBX Art & Studio remind us, art fosters five things:

With these things in mind, continue in creativity, finding, like Sumi-e art, that creativity bridges the mind and body in marvelous ways.[1]

To learn more about Sumi-e painting, I recommend Takamasa Ono’s The Simple Art of Sumi-E.

[1] All art caries two primary aspects: the physical (the artistic medium) and metaphysical (the ideas or truths behind the art), mixing the medium and the message.