Top Posts
Knowing the One Who Always Keeps His Word
Pregnancy Resource Centers Fight For Life Amidst Opposition
This World is Not Our Home
Lessons Learned From a Gingerbread House
Let There Be Peace on Earth
‘I Wanna Dance’ movie: Whitney Houston’s success and...
Fact Finding, Sight Seeing, and Prayer Walking
Kidney donation led to 8 life-saving surgeries
The Power of Curiosity
When Love Came Down at Christmas
Home Tags Posts tagged with "Super Bowl" 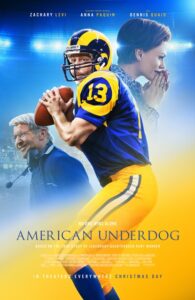 ORLANDO, FL (ANS)  Do life’s challenges ever get you discouraged?  NFL Hall-of-Famer Kurt Warner’s wild journey from castoff to superstar could inspire you to keep pursuing your dreams.

American Underdog stars Zachary Levi (Shazam!) as Kurt Warner; Academy Award® winner Anna Paquin (The Piano, X-Men) as his wife Brenda; and Dennis Quaid (A Dog’s Journey, Soul Surfer) as head coach Dick Vermeil.  The Erwin Brothers (I Can Only Imagine) directed the film based on the book All Things Possible by Kurt Warner with Michael Silver. 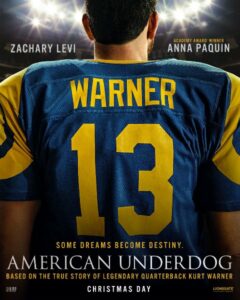 Warner is quite transparent about his life challenges.  His parents divorced when he was four.  Bedwetting lasted until about age 12, bringing many emotional struggles.

Despite his high school success, Iowa’s top colleges overlooked Warner, so he played for Division 1-AA University of Northern Iowa, though only as a backup until his senior year.

As graduation approached, NFL teams initially ignored him.  Eventually, the Green Bay Packers signed him but cut him after five weeks.  He noted in his book, “I wasn’t [yet] mentally, emotionally, or spiritually prepared to handle success.” 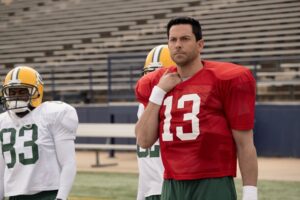 Money was tight.  He and Brenda “lived in a basement, and ate meals purchased with food stamps.”  They drove an old, mice-infested car that died on left turns, necessitating creative navigation to involve only right turns.

Who is this guy?

Four seasons of Arena football and NFL Europe honed his skills.  Signed by the Rams for 1998, as backup quarterback he threw just eleven passes.  In 1999, the starting quarterback was injured, and Warner began to shine.  Sports Illustrated’s cover photo included the caption “Who Is This Guy?”  The Rams lost only three games that season. 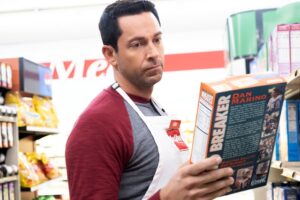 In his book, Warner reflects on his character builders:  “Gale Sayers, the Chicago Bears’ Hall of Fame running back, [wrote a book] I Am Third. …God first, his family second, and himself third.”  Brenda helped Kurt understand that forgiveness and friendship with God were gifts, not rewards for good behavior.

Warner says he does not see God as a divine touchdown bestower, but feels faith has practical benefits:  “Any sharpness, clarity, and grace under fire I’m able to summon are a result of faith and God’s presence in my life.”

Warner’s had numerous opportunities to display grace under fire.  With Super Bowl XXXIV tied and only two minutes remaining, Coach Vermeil told him, “You couldn’t ask for a better script.  Now go out and give it that perfect ending.”  Warner threw the winning touchdown pass. 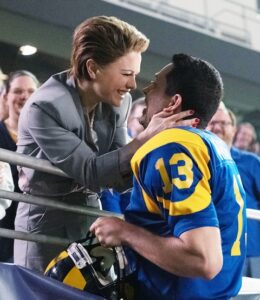 Road to the Hall of Fame

Kurt’s NFL career spanned 12 seasons with the Rams, NY Giants, and Arizona Cardinals. It included MVP designations in two seasons, and two more Super Bowls.  Each was close, his team losing by slim margins (3 and 4 points) in the final minute of play.  2017 saw him inducted into the NFL Hall of Fame.

Pleased that his story can inspire others, he notes in his book, “Your situation might seem bleak, but often you look back and realize it was part of a larger plan. I believe that the Lord has a plan for each of us that’s better than anything we can imagine – even if that plan isn’t obvious to us at every stage.”

His “First Things First” life motto draws on Jesus’ famous statement, “Seek first His kingdom and His righteousness and all these things will be given to you.” 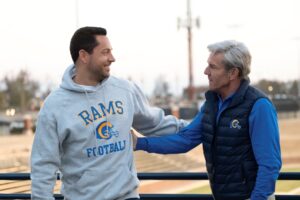 American Underdog is a touching love story and family drama with exciting football action and a hope-filled boost for anyone ever tempted to give up.  I suspect strong-faith, no-faith, any-faith, and anti-faith viewers will enjoy it.

Rated PG (USA) for some language and thematic elements. 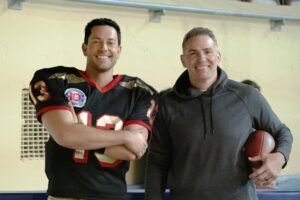