Top Posts
Knowing the One Who Always Keeps His Word
Pregnancy Resource Centers Fight For Life Amidst Opposition
This World is Not Our Home
Lessons Learned From a Gingerbread House
Let There Be Peace on Earth
‘I Wanna Dance’ movie: Whitney Houston’s success and...
Fact Finding, Sight Seeing, and Prayer Walking
Kidney donation led to 8 life-saving surgeries
The Power of Curiosity
When Love Came Down at Christmas
Home Tags Posts tagged with "Support for Israel"

JERUSALEM, Israel (ANS) — The rate of support for the State of Israel among Evangelicals between the ages of 18 and 29 has declined by more than half between 2018 and 2021 – from 69% to 33.6% – according to a study that will be presented Thursday at Tel Aviv University, as cited by The Jerusalem Post.

“It seems that the Israeli government’s decision to abandon large segments of the liberal, progressive Democratic public and gamble only on the Evangelicals might end up costing us dearly,” said Dr. Yoav Fromer, head of the Center for the Study of the United States at Tel Aviv University, in partnership with the Fulbright Program, in response to the study.

The Jerusalem post says the research will be featured as part of a university conference called “The Americanization of the Israeli Right.” 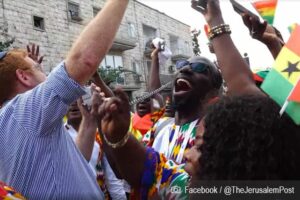 Christians celebrate the Fast of Tabernacles in Jerusalem

The research was conducted by Dr. Motti Inbari and Dr. Kirill Bumin of the University of North Carolina at Pembroke, among 700 Evangelicals aged 18 to 29. Although the 2018 study included Evangelicals of all ages and showed that overall support for Israel among Evangelicals stood at 75%, the current study did not include other ages.

“This is the million-dollar question,” Inbari told The Jerusalem Post.

He said that in the Bible one can “find all kinds of justifications for all kinds of positions,” and that when they asked respondents why they chose to support Israel, the Palestinians or neither, the general response was “because I am Christian.”

Specifically, 59% of young Evangelicals said they support Israel because they are religious. Some 39% said they attend church daily, and 18.4% said they read the Bible each day, according to the Jerusalem Post article.

Inbari told the Post that another factor might be the atmosphere on college campuses that the younger generation is attending. He explained that younger Evangelicals are more educated with college degrees than their parents and grandparents, “so it might be that exposure to an [anti-Israel] campus climate created these changes.”

Finally, he suggested that the political climate in the US might have played a role in such a dramatic shift.

“What we assume is that [Donald] Trump’s presidency created a counter effect in the hearts and minds of young Evangelicals,” Inbari said. “They saw their parents and grandparents standing beside Trump without reservation, and it created an opposite effect among the young. Opposing Trump would be like a youth rebellion.”

Among those young Evangelicals who said they supported the Palestinians, almost half (48.4%) said the reasons were political.

The only place where the younger and older Evangelicals seemed to align, according to the study, was Jerusalem being the capital of the Jewish state, with about 72% of young Evangelicals saying they felt Jerusalem should remain the undivided capital of Israel.

The Jerusalem Post article says former Prime Minister Benjamin Netanyahu made engagement with the Evangelical Christian community a pillar of his foreign policy. At a Christians United for Israel conference in 2017, he told the crowd that they were Israel’s best friends in the world.

Recently, former Ambassador to Washington Ron Dermer came under fire when he suggested that the Jewish state should prioritize Evangelicals over the Jewish Diaspora.

“People have to understand that the backbone of Israel’s support in the United States is the Evangelical Christians. It’s true because of numbers and also because of their passionate and unequivocal support for Israel,” Dermer said.

This study seems to contradict that policy, Fromer said.

“For more than a decade, the Israeli government has put all its eggs, when it comes to American politics, in one basket – that of the Evangelical voters in the Republican Party,” he said.

“If the trends clearly reflected in this study continue, we will discover in the not-too-distant future that the basket is broken, because the support has not been transmitted to younger generations. And the result? The loss of Israel’s most important strategic pillar: the unreserved support of the United States.”