Top Posts
Colorado football coach Sanders’ unabashed faith
There’s A Light That Enters Houses With No...
Knowing the One Who Always Keeps His Word
Pregnancy Resource Centers Fight For Life Amidst Opposition
This World is Not Our Home
Lessons Learned From a Gingerbread House
Let There Be Peace on Earth
‘I Wanna Dance’ movie: Whitney Houston’s success and...
Fact Finding, Sight Seeing, and Prayer Walking
Kidney donation led to 8 life-saving surgeries
Home Tags Posts tagged with "Texas and Ohio Shootings"

CHARLOTTE, N.C. (ANS) — Teams of crisis-trained chaplains with the Billy Graham Rapid Response Team (RRT) are on their way to El Paso, Texas, and Dayton, Ohio, following a pair of shootings over the weekend.

News reports say 20 people have died and 26 others were injured in El Paso. In Dayton, an additional nine people were killed and 26 people were hurt. RRT chaplains at both sites will work alongside government officials, churches, first responders and with the community at large to provide emotional and spiritual care. 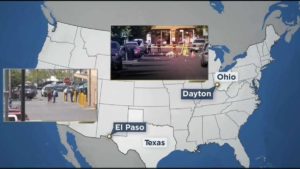 “This is such a difficult time for both of these cities,” said Jack Munday, international director of the RRT. “In this time of shock, anger, brokenness and incredible loss, we can’t imagine the pain and suffering people are feeling from these senseless acts of evil. Yet, we know God hasn’t forgotten them, and seeks to heal the brokenhearted and bring comfort to those who grieve.”

Initial reports of an active shooter in El Paso began around 11 a.m. Saturday morning, and El Paso police told reporters they had a person in custody by 1 p.m., ending the lockdown of the Walmart and other area businesses. The Dayton shooter, who opened fire while wearing body armor, was stopped by police in less than a minute, potentially saving hundreds of lives.

“Please join me in praying for the grieving families whose loved ones were killed today and for the nearly two dozen more who are injured and being treated in nearby hospitals,” Billy Graham Evangelistic Association President Franklin Graham said on his Facebook page following the first incident. “Even the youngest of children were not spared from this senseless evil. Unbelievably, all at a local Walmart. I join with Governor Greg Abbott who said, ‘We ask God to bind up the wounds of all who’ve been harmed.’”


The RRT also has chaplains in Del Rio and Laredo, Texas, where they are offering respite and comfort to those who have been granted legal access into the United States. The organization already has connections to the Dayton area, having sent a team of 22 chaplains following a tornado that ripped through the area in May of this year.

In an interview by CEN Public Information Officer Deputy John Phelps earlier today, CEN Founder and President Mary Marr said: “While there is no known specific threat to the Christian church nationwide at this time, CEN will continue to monitor our federal, state and local sources and advise accordingly. This tragedy is a reminder for Christians in the U.S. to pray fervently for revival to heal our land; to be vigilant and report any suspicious activity to local law enforcement promptly; and to care for those affected by this tragedy sensitively sharing the Hope of Christ in the weeks and months to come.”

Marr also stated: “While we are on higher alert especially in soft target spaces like theatres, schools, malls and churches as part of our daily routine now, God’s Word in Acts 4:29-30 reminds us: ‘Now, Lord, consider their threats and enable your servants to speak your word with great boldness. Stretch out your hand to heal and perform signs and wonders through the name of your holy servant Jesus.’ This is a time when Christians need to be spiritually, emotionally, mentally and physically resilient. Again, let’s be Aware, Ready and There sharing Christ together!”

Christians are being urged to ‘Stand ready’ to respond as Jesus would to protect your own congregation as you share the Hope of Christ with those who are hurting. (Habakkuk, Chapter 2)

The author of this story, Michael Ireland, is a self-supported media missionary with ANS. Click here to support him as a missionary journalist.
August 5, 2019
FacebookTwitterPinterestEmail