Top Posts
Colorado football coach Sanders’ unabashed faith
There’s A Light That Enters Houses With No...
Knowing the One Who Always Keeps His Word
Pregnancy Resource Centers Fight For Life Amidst Opposition
This World is Not Our Home
Lessons Learned From a Gingerbread House
Let There Be Peace on Earth
‘I Wanna Dance’ movie: Whitney Houston’s success and...
Fact Finding, Sight Seeing, and Prayer Walking
Kidney donation led to 8 life-saving surgeries
Home Tags Posts tagged with "The Beatles"

Ken Mansfield Reflects on The Roof: The Beatles Final Concert 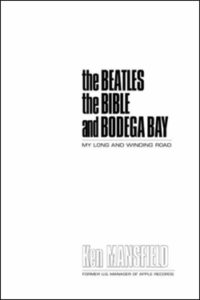 The Beatles, The Bible, and Bodega Bay by Ken Mansfield

ALBUQUERQUE, NEW MEXICO (ANS)—The first time I reached out to Ken Mansfield was after reading a book I picked up at the Modesto Public Library.

In The Beatles, the Bible and Bodega Bay,  Mansfield recounts his history with the Beatles and life’s bumps, including cancer. In vivid detail he writes about his career trajectory, first at Capitol Records in Los Angeles, then as US Manager of Apple Records, the Beatles recording company.  To my surprise I learned that Mansfield was “the guy” in the white jacket—sitting not too far from Yoko Ono—at the final concert the Beatles performed on the rooftop in London.  Mansfield is part of rock history.

On a whim I found his email address and emailed him.  To my surprise, he emailed back.  Our correspondence was short, but I passed along his information to Pastor Damian Kyle of Calvary Chapel Modesto.

Several years later I was living in Southern California, working for Calvary Chapel Costa Mesa.  And low and behold, I saw a new Ken Mansfield book, The White Book. As an insider to the last years of the Beatles existence, Mansfield recounts his experience and insight into the world’s most famous rock band, weaving his faith within the tapestry of the story. 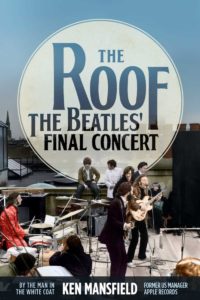 The Roof by Ken Mansfield

It wasn’t until I moved to Albuquerque, New Mexico that I met Ken Mansfield.  Pastor Skip Heitzig hosted Mansfield on two different occasions.  I found Ken to be a humble, kind man—with amazing stories to tell, the greatest being his journey with Christ.

After several other books—both about music and his faith, Mansfield wrote The Roof:  The Beatles’ Final Concert (2018).  And though Mansfield has touched upon that iconic day in his other books, The Roof  hones in on the famed moment in music history.

On a recent NPR All Songs Considered interview, Mansfield recounts the event.   The interviewer Bob Boilen sets up the interview as such:

“Fifty years ago today, on Jan. 30, 1969, The Beatles gave what would be their final concert. And on this special episode of All Songs Considered, we talk with someone who was there: Ken Mansfield wrote and just released a new book on this life-changing event called The Roof: The Beatles’ Final Concert. Mansfield was the U.S. Manager for The Beatles’ brand-new label, Apple Records at the time the unconventional and historic event took place on the Apple rooftop in the heart of London. The daytime concert delighted the fans who gathered below, angered some of the business folks who found the noise too unruly and mystified many. Everyone could hear the band down on the street, but no one could see The Beatles.”

Over the course of the twenty-six plus minute interview, Mansfield provides amazing insight into that day, acknowledging its importance and debunking some of the rumors revolving around the concert, such as the police activity. He did, however, discuss how cold it was, with a couple of Beatles borrowing jackets for the concert. 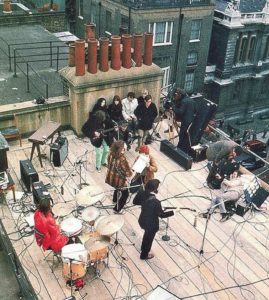 The Beatles performing on a roof in London.

On the two occasions I’ve met Mansfield, I’ve heard someone ask him about the Beatles’ faith.  There have been many rumors that John Lennon became a Christian towards the end of his life.  And though Mansfield was reluctant to give a definite answer, his love for the four men from Liverpool came through, asking us to pray for them (now only two members remaining).   Mansfield gives more insight into the question in the introduction he wrote for the book, The Beatles, God, and The Bible.

What is clear is that Lennon was grappling with the person of Jesus prior to his death. In a 1980 interview that John Lennon is reported to have given, he stated, “I’m a most religious fellow. … I was brought up a Christian, and I only now understand some of the things that Christ was saying in those parables.”

From this quote, one can gather three things.  One, Lennon considered himself “religious.”  Two, he connected his faith to his Christian upbringing.  And three, he was recently reading Jesus’ parables (“I only now”). 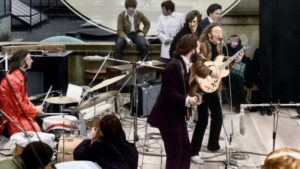 By the end of the year—in December 1980, Lennon would be shot and killed by Mark David Chapman, a delusional man thinking he was Holden Caulfield from the novel The Catcher in the Rye. Chapman stood near the wounded Lennon, reading portions from the novel.

More About the Famous Rooftop Concert

To read other accounts about the events surrounding the rooftop concert, click here: http://time.com/5515655/beatles-rooftop-concert/

Director Peter Jackson has movie rights for a forthcoming biopic movie about the rooftop concert.  More information, with comments given by Mansfield, click here: https://www.cbsnews.com/news/the-beatles-historic-final-concert-anniversary-2019-01-30/