Top Posts
Colorado football coach Sanders’ unabashed faith
There’s A Light That Enters Houses With No...
Knowing the One Who Always Keeps His Word
Pregnancy Resource Centers Fight For Life Amidst Opposition
This World is Not Our Home
Lessons Learned From a Gingerbread House
Let There Be Peace on Earth
‘I Wanna Dance’ movie: Whitney Houston’s success and...
Fact Finding, Sight Seeing, and Prayer Walking
Kidney donation led to 8 life-saving surgeries
Home Tags Posts tagged with "The Feather Thief"

ALBUQUERQUE, NEW MEXICO (ANS)— “What excites me about Johnson’s book,” Dr. Christopher Witt of the University of New Mexico’s Museum of Southwestern Biology said in his opening remarks, “is how Johnson values Natural History museums.”

If this were the only thing The Feather Thief were about, it’d be a fine book.  But what makes The Feather Thief so engaging is that it is much more.  One-part history, one-part investigative journalism, and one-part true crime, The Feather Thief follows a musician-fly-tier, Edwin Rist, in his quest to steal feathers from the British Natural History Museum.  In 2009, Rist broke into the museum, stealing 299 birds from two separate collections, naturalist Alfred Russel Wallace and Walter Rothchild. And the amazing thing is Rist succeeds, that is, until his arrest over a year later. 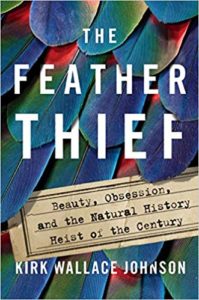 In the hour-and-a-half lecture, Kirk Wallace Johnson, gives an overview of The Feather Thief and provides details that continue to unravel to this day.  Interestingly, one of Rist’s step uncles was in the audience, making the evening alluring.

Johnson begins by stating “Without New Mexico, this book would not exist.”  What Johnson is referring to is a fly-fishing trip he took in New Mexico, a reprise from his work on behalf of Iraqi people who helped US troops.   It was in New Mexico that his guide (name shall remain anonymous; the man receives threats from people in the fly-tying industry), told him about Rist and the feather heist.  Johnson was smitten.  And over the next several years, Johnson delves into a story that is as wild as the birds that were stolen. 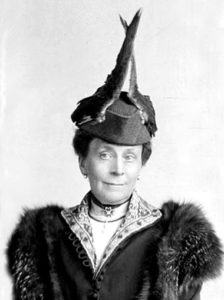 During the lecture, Johnson gives insight in the demise of the bird population during the turn of the century: war and women’s hats.  Because of the ongoing European conflicts, bombs fell on many natural history collections. War, combined with women hats—where birds were caught and killed to adorn them, were two main culprits in the decline bird population, especially exotic birds.  Luckily, it was women—through Audubon Society, that helped advocated for the birds, putting an end to the slaughter for fashion.

While writing and researching the book, Johnson asked himself two over-arching questions:  One, what is the British Museum doing with so many specimens?  The answer: the British Museum has the 2nd largest collection of bird “skins” specimens in the world.  It collects birds to study biology, climate change, and natural history. The second question: why did Edwin Rist, who is a concert flutist, steal the feathers?  The answer:  Feather Fever: a subculture of fly-tiers who value the Victorian way of fly-ties, going to great lengths to get feathers for the lures, though most are not used for fishing, but as artwork displays.  Rist became a prodigy of fly-tying at age fifteen, winning awards.  And while in music school in London at age 22, developed a plan to steal the feather for his passion and money.  Rist wasn’t caught until a fellow fly-tier tipped off police and Rist was arrested.

Diagnosed and Let Off 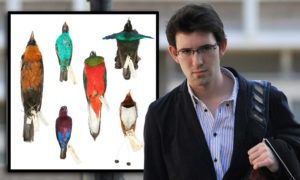 File photo of Edwin Rist, who stole expensive bird feathers from the National History Museum in Tring.
Yesterday (Friday 29th July 2011) he was ordered by St Albans Crown court to hand over £125,000 under the proceeds of crime act.

But this is where the story gets even more interesting.  The comedic actor, Shacha Baron Cohen’s brother, Simon Baron Cohen—who is a psychologist, diagnosed (many would say falsely) Rist with Asperger syndrome, getting Rist off the hook.  Rist never went to jail for his crime.

Johnson played clips from his eight-hour interview with Rist.  It took Johnson four years before Rist would give him the interview.  In the clips, Rist denies being a thief.  Rist also gives clues to the fact that he was faking Asperger syndrome.  In the end, Johnson—who bent over backwards saying he is not a qualified psychologist, had doubts Rist has Asperger syndrome.  When pressed by Johnson, Simon Baron Cohen admitted Asperger syndrome could be faked if the person was intelligent enough to fake the symptoms. 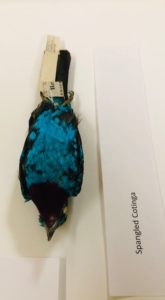 Bird example provided by the Museum of Southwestern Biology

The remaining part of the evening consisted of the recovery process, of which Johnson was a part.  Of the 299 birds stolen, 172 were recovered (not all in one piece) and 19 were sent in by mail.  Rist’s step uncle who was in the audience wanted the gathering to know that Edwin’s father did have a hand in helping in the recovery.  Johnson acknowledged this, saying “Edwin’s dad paid money to make many of the specimens whole.”  Johnson was thankful for the family’s cooperation. But Johnson didn’t believe Rist was upfront with his father, hiding the names and contacts of some of the higher paying customers.

When asked by an audience member if Rist is still fly-tying, Johnson could not answer.  He has hunches he may but could not confirm or deny this fact.  Instead, Johnson played a clip of Rist playing his flute to a Metallica song, saying it has over a million views. 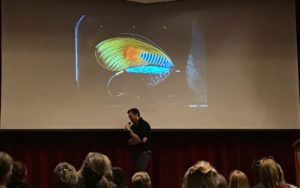 With such an overwhelming story to take in, there’s much that could be said about The Feather Thief—from animal ethics, to the protection of birds, to unbridled passion, to how a young man can enter in a museum and almost get away with it.

“Guys are going deeper to get the birds, using codes and words only they can understand,” Johnson told us.  “They sell the birds online and through the black market.”

In the end, people must protect the birds—and specimens in museums, for in doing so, we help protect God’s creation and learn about the history of the world.  Birds are more than just feathery fowl, but teachers tethering us to grace and beauty, helping our understanding of life take flight. 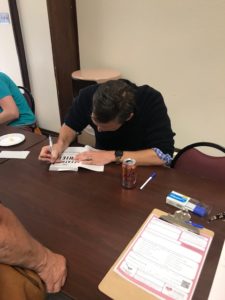 The evening was co-sponsored by the University of New Mexico’s Natural History department, The Museum of Southwestern Biology.   With specimens for the audience to see at the event, The Museum of Southwestern Biology has over 4-millaim specimens, setting it up as one of the world-class museums in the United States. It houses the second largest collection in mammal species in the world.  For more information on the museum, click here: https://msb.unm.edu/