Top Posts
There’s A Light That Enters Houses With No...
Knowing the One Who Always Keeps His Word
Pregnancy Resource Centers Fight For Life Amidst Opposition
This World is Not Our Home
Lessons Learned From a Gingerbread House
Let There Be Peace on Earth
‘I Wanna Dance’ movie: Whitney Houston’s success and...
Fact Finding, Sight Seeing, and Prayer Walking
Kidney donation led to 8 life-saving surgeries
The Power of Curiosity
Home Tags Posts tagged with "The Hangman of Tehran"

The Hangman of Tehran 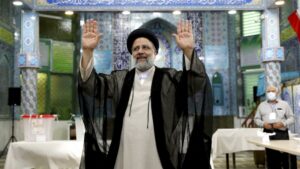 Todd Nettleton of The Voice of the Martyrs USA says even politicians who advocate reform won’t bring the change many Iranians want.

“Even the people who call themselves reformers are not looking to overthrow the Islamic government. They’re not looking to say, ‘Hey, the Quran is not working as a national constitution, let’s find something else.’ What they’re really doing is looking to just change the look of things just a little bit. ‘Let’s, let’s just allow a half-inch of hairline to show under our headscarf.’”

MNN commented additionally, the Supreme Leader in Iran is not elected by the people. “So what can actually bring change for the country? Only the love of Jesus. By the power of the Holy Spirit, the Iranian Church continues to grow day by day.”

Nettleton says, “The Gospel is being preached, Bibles are being smuggled into the country. Satellite television broadcasters, radio broadcasters, and internet websites are set up to reach Iranians with the Gospel. And that fertile soil is receiving those Gospel seeds. And it is flourishing. Because people have seen the true face of Islam, and they do not want that face any longer.”

Many believe the election of Ebrahim Raisi sends an ominous signal to Israel, the region, and the rest of the world, according to CBN News.

As Iran’s Supreme Leader Ali Khamenei boasted about how the Iranian nation fulfilled its democratic responsibilities by holding the elections, many others called it a sham.

“They didn’t even put up the facade of democracy.  It was a one-man race,” said Iranian expert, Thamar Elam Gidin, from the University of Haifa.

As a prosecutor and member of the infamous death committees in the ‘80’s, the incoming president earned the nickname “the Hangman of Tehran.”

“The executioner is now the head of the executive branch,” Gidin said.

“He’s a man with the blood of thousands of Iranians on his hands.  He was a member of the death committees in the 1980s.  He sentenced thousands of people to death.  They are the mass murders of 1988 that were buried in common graves without even marking,” she said.

In 2019, the US government placed sanctions on Raisi and Amnesty International has called for him to be charged with crimes against humanity. Official results indicate less than 50% of Iranians voted — a historic low turnout.

Some claim it was even less as dozens of videos online show no one at many polls.  These Iranian mothers joined an online appeal to boycott the election.

“Dear brave Iranians, don’t vote in these elections.  We have been voting for 40 years.  This is the result.  They killed our children,” they said in the appeal.

For some, the no-shows are seen as a victory against the regime. Iranian journalist Masih Malinejad reflected the mood of many Iranians when she interviewed Saeed Damvar whose brother was killed in the November 2019 Iran protests.

“In an election where they know a murderer will win, why hold them?” Damvar rhetorically asked.

In Jerusalem, new Israeli Prime Minister Naftali Bennett hoped the election results would open the eyes of the world to see Iran for what it truly is.

“Raisi’s election is, I would say, the last chance for the world powers to wake up before returning to the nuclear agreement, and to understand who they are doing business with, Bennett said.

“These guys are murderers, mass murderers.  A regime of brutal hangmen must never be allowed to have weapons of mass destruction that will enable it to not kill thousands, but millions,” Bennett added.

It’s expected Raisi will enforce the tough nuclear policy set by Iran’s Supreme Leader.  One security official told Israel’s Channel 12 that there will be no choice but to prepare attack plans on Iran’s nuclear program.