Top Posts
Colorado football coach Sanders’ unabashed faith
There’s A Light That Enters Houses With No...
Knowing the One Who Always Keeps His Word
Pregnancy Resource Centers Fight For Life Amidst Opposition
This World is Not Our Home
Lessons Learned From a Gingerbread House
Let There Be Peace on Earth
‘I Wanna Dance’ movie: Whitney Houston’s success and...
Fact Finding, Sight Seeing, and Prayer Walking
Kidney donation led to 8 life-saving surgeries
Home Tags Posts tagged with "The Living Room San Francisco" 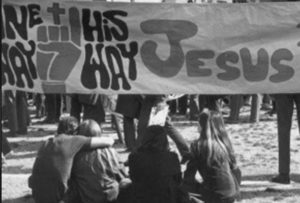 NOVATO, CA (ANS – September 22, 2018) — They called it the Big House, a large ranch house in Novato, California, situated on a former egg farm, where four hippie couples set their careers aside to live together with their children at the height of the Sixties.

Evangelist Lonnie Frisbee crashed on their living room floor during the formative months of his early Christian life and grew under their influence, before he joined Pastor Chuck Smith and rode the wave of the Spirit in Southern California.

Steve and Sandi Heefner were influential in getting the four couples together. Steve, a disc jockey, landed in the Bay Area with his wife in 1965. “We moved a lot, every year, because of radio, to get to a bigger market,” he notes.

They settled in Sausalito and began reaching out to make friends. Sandi went to a Newcomer’s Club put on by the city and met Liz Wise, who appeared “exotic.”

Sandi, a nominal Roman Catholic, planned a dinner party with Liz and her husband Ted, a former agnostic who had recently become a Christian. Sandy also invited Jim and Judy Doop, grade school friends from the East Bay. The three couples hit it off in a spectacular fashion.

Once they got to know each other, Ted and Liz invited friends from Berkeley, Danny and Sandy Sands, into their group.

“This was not an accumulation of Christians wanting something to happen, we were just friends trying to get to know each other,” Sandy notes.

Ted Wise had recently been tripping on LSD, trying to figure out what to do with his life, when he met Jesus Christ and was born again. Some credit Ted as being the first convert of the Jesus People Movement.

“Ted began to talk about putting something together that would further Jesus Christ into ordinary lives,” Sandi recalls. “We started discussing this thing and decided we would have potlucks together.” Then the idea progressed to finding a house where they could live together – including the seven young children between them.

Sandi was initially wary about communal living, but Ted and the others were swept up in the enthusiasm of “what was happening at the time.”

“I was not for it,” Sandi admits. But then she had an unusual experience that changed her thinking and renewed her faith.

“Steve and I were having a lot of marital problems and were not getting along,” she recalls. “Our arguments and differences were becoming public.”

One weekend Steve and Sandi decided they would go camping together along the coast. They couldn’t seem to find the right campsite and stopped at a hamburger stand, where the couple began arguing in public.

“That night I was so pissed I didn’t even put my sleeping bag near him. I was crying to the Lord. I knew my marriage was dissolving.”

As Sandi looked up at the night sky, she saw an unusual formation of stars she had never seen before. “I saw a huge figure-eight made out of stars.”

She recognized it as a sign from God, that “He is contacting me and I’m supposed to be the eighth member of this community. I knew that was his signal to me personally and I understood I was called. But I was way out of my element as a Roman Catholic,” she says.

As far as they knew, they were the first Christian hippie community in northern California. “We were the first one I had heard of, of real families with small children and careers, dropping everything to become an evangelical arm.”

“They gave up everything, sold everything and moved in together,” Connie Frisbee recalls. “Many people think this is where the explosion happened. I find this story about these four couples as big as the story about Lonnie, because these people were in their twenties and had jobs. They had lives that were already moving in a direction.

“It would be like coming to me after I worked at UPS for 10 years and had kids and saying quit your job, take your kids and move in with these other four couples, sell everything you have and just keep what you need to function as one unit. That was an enormous sacrifice.”

“They decided to live like the Book of Acts,” she adds. Some referred to their commune as the House of Acts.