Top Posts
Colorado football coach Sanders’ unabashed faith
There’s A Light That Enters Houses With No...
Knowing the One Who Always Keeps His Word
Pregnancy Resource Centers Fight For Life Amidst Opposition
This World is Not Our Home
Lessons Learned From a Gingerbread House
Let There Be Peace on Earth
‘I Wanna Dance’ movie: Whitney Houston’s success and...
Fact Finding, Sight Seeing, and Prayer Walking
Kidney donation led to 8 life-saving surgeries
Home Tags Posts tagged with "The Monk’s Record Player"

The influence Bob Dylan had on monk, Thomas Merton, as seen in Cables to the Ace and the new book The Monk’s Record Player 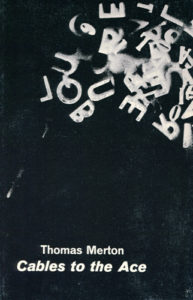 Cables to the Ace by Thomas Merton

ALBUQUERQUE, NEW MEXICO—My first discovery of monk, writer, and poet, Thomas Merton, came through his poetry.  I picked up Cables to the Ace: Or Familiar Liturgies of Misunderstanding at a used bookstore in the Bay Area in California. It remains my favorite book of Merton’s book of poetry to this day.

Around the same time as my Merton discovery, I was attending college at Ohlone in Fremont, California.  It turned out, one of my professors, Joseph Steinke, was a prior for Merton in Kentucky.  Joseph T. Steinke, STL was with Thomas Merton at  Gethsemani Monastery, studying to be a monk.  Through a series of internal conflicts, Steinke left the Abbey.  Steinke later married and found a voice in the academic world.

For some reason I gravitated toward Professor Steinke.  I sat through some of his classes, listening to him teach with an interest in ethics and philosophy.

When I, myself, was at a crossroad in my life (I was trying to determine if I should remain in college or continue with the rock band I was in, having just been signed to a record contract), I turned to Professor Steinke for advice.  He brought me into his office.  After he asked a series of questions, he said I should remain in school. “If things don’t work out in the music business, you’ll never be sorry you didn’t finish school,” he said.  “We all need something to fall back upon.” And he was right. I finished school, continuing for many years after. 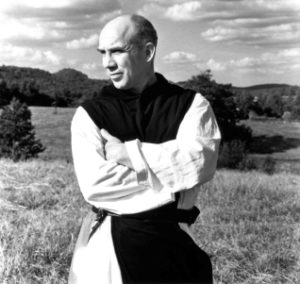 At this same meeting we discussed Merton.  I told him that I discovered Merton through his poetry, but had since picked up his book, No Man is an Island, at a used bookstore. Professor Steinke shared a little about Merton.  “He was brilliant, one of the best minds I’ve encountered,” he began.  “He could have been a marvelous Trappist monk,” he continued.  What do you mean, “could have,” I asked?  “Well he was a writer.  And writing eventually pulled him away from his first love: dedicated prayer.”  Interesting, I thought.  “In a way, Merton’s fame may have distracted him from what he really excelled: pursing God through silence.”   So, was writing not a good thing, I asked? “No, it was great.  We’ve all benefited from it,” Steinke said.  “But I’ve always wondered what he’d be like if he didn’t write.”

And then Professor Steinke did something I’m thankful for to this day.  Still sitting in his chair, he turned around and pulled two books from his shelf.  “Tom would continue to send me books after he wrote them, even after I left the Abbey,” Steinke said.  “These two I’ve had sitting here for a couple of years.  I’d like for you to have them,” he continued, handing me the books.  I can’t take these, I said, they’re from Thomas Merton.  “That’s true.  I have more.  He’s very gracious to send them to me.  He’s a good man.”

Why this backstory on Merton?  The reason is simple: I’ve been fascinated with Thomas Merton for most of my adult life.  He provided a semblance of convergence between academia, Christianity, and music. 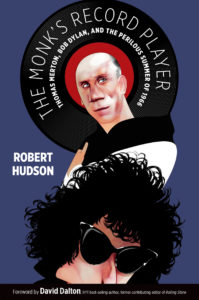 To my surprise, a new book by Robert Hudson bridges the gap between these three areas, tossing in a lot of love along the way.  In The Monk’s Record Player:  Thomas Merton, Bob Dylan, and the Perilous Summer of 1966, Hudson chronicles two major incidences of Merton’s life: his love affair with his nurse, and his discovery of Bob Dylan.  And important to my interaction with Merton, the poetry book, Cables to the Ace, plays and important role. According to Hudson, Merton was influenced by Dylan while writing the book  For some reason this never dawned on me when I first read Cables years ago.  But Hudson makes a great case, drawing comparisons between Dylan’s poetry/lyrics and Thomas Merton’s incorporation of themes and style derived from Dylan. 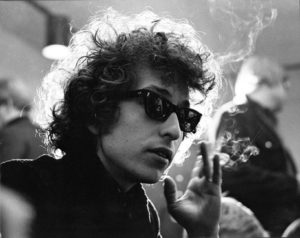 To give you a review of the book would be stinting.  It’s best to read it.  Rest assured, Hudson’s respect for Merton and Dylan shine through in every chapter, though most of the book focuses on Thomas Merton.

Concerning Merton, he’d be 104 this coming January 31st. He was born in 1915 and died in 1968.  He’s celebrated the world over for his writings, poetry, and practical blend of Catholic and mystical Christianity. Born to artist parents in France, Merton ended up in the United States with his American grandparents—via academic stays in England and Rome—after his parent’s deaths.  His mother was an artist and American Quaker, his father, an artist and Anglican from New Zealand.  Merton was converted to the Christ while a student at Columbia University, chronicled in this bestselling autobiography The Seven Storey Mountain.

Merton went on to write over 70 books, countless essays, poems, and journals.  Many deem him one of the most influential spiritual writers of our era.  C.S Lewis noted Merton as one of his favorite contemporary writers.