Top Posts
Knowing the One Who Always Keeps His Word
Pregnancy Resource Centers Fight For Life Amidst Opposition
This World is Not Our Home
Lessons Learned From a Gingerbread House
Let There Be Peace on Earth
‘I Wanna Dance’ movie: Whitney Houston’s success and...
Fact Finding, Sight Seeing, and Prayer Walking
Kidney donation led to 8 life-saving surgeries
The Power of Curiosity
When Love Came Down at Christmas
Home Tags Posts tagged with "This Is My Story This Is My Song”"

NASHVILLE, TENNESSEE (ANS) – There was nothing funny about being born in a home for unwed mothers, or at the age of four being deposited at the Buckner Benevolent Orphanage in Dallas.

So begins the story of how little Bertha Louise Hable who would become adored by a world of fans as “Lulu.” It came as a name pinned on her post orphanage by one of her cellmates on a drug bust who said she reminded her of ‘Little Lulu’ from the comic strips. 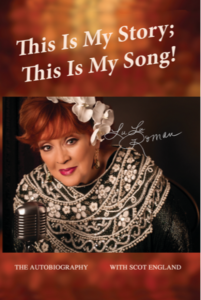 Her just released autobiography, This Is My Story, This Is My Song, is a heartfelt, sometimes heartbreaking, and consistently page-by-page compelling story of a little orphan girl who grew up to bring laughter and become “family” to millions, according to Jackie Monaghan of Morningstar PR.

Monaghan says readers will find an early life marked with abandonment, several ‘busts’ for drug possession and a long and winding road of wrong people and wrong directions before Lulu came to the attention of the masses. She, in fact, first came to the attention of producer Sam Lovollo who was working on setting the cast of a new TV show called “Hee Haw.” The show’s co-host to-be, Buck Owens thought Lulu would add the perfect touch of ‘bigger than life’ comedy to the new cast.  Buck was right.

Lu debuted nationally in 1969 on the first episode of “Hee Haw” on CBS-TV with the original cast in the cornfield. She was 23 and an instant hit. She stayed to become a household name in America and to briing laughter to millions of viewers from the first episode to the last airing in 1993.

As 2019 marks the 50th Anniversary of “Hee Haw,” Lulu Roman is the only remaining member of the program’s freshman class, Monaghan said.

“The good news is the show is now in reruns on RFD-TV giving a healthy breath of new life as one of the top-rated programs on the network.  As it brings a fresh audience who come for the country greats turned legends and the wholesome laughter, so has come a new generation of Lulu Roman fans,” Monaghan said in a email to ASSIST News.

Co-authored with Scot England, This Is My Story, This Is My Song provides an insider’s view of the “all access” color commentary of her life on “Hee Haw” as well as the family of country music greats who became her family in Nashville’s music community and beyond.

“But the real heart of the story Lulu hopes readers will take away is her acceptance of Jesus Christ as the centerpiece of her life,” Monaghan said, adding: “In sharing her deepest of moments — most recently the tragic loss of her son Justin while the book was being written — so here she also shares the deep realization of where the courage to live life can be found.”

“Despite everything I experienced and all the bad choices I made, I am a living example of God’s grace,” Roman tells listeners in summing up her hope that the book will do more than entertain.

According to Monaghan, post-“Hee Haw” life has found Lulu receiving Christian music’s highest honor, the Dove Award on her way to becoming a member of the Country Music Gospel Hall of Fame.  Releasing more than 20 music projects that showcase her love of both music and ministry, Lulu continues on the road to bring laughter as well as hope. Churches, women’s events and gospel concerts are today an important part of her travels, as are the ‘down home’ fun comedy schedulings.

At the 50 year mark of her journey Lulu is this year joining tour mates Buck Trent, Jana Jae and Misty Rowe on a 2019 series of “Kornfield Friends” reunion concerts–celebrating the 50th Anniversary of “Hee Haw” in bringing back the familiar sights, music, and gags from the cornstalks.

As for her future, Roman said:  “I’m hopeful that I can continue what I’m doing. There’s a fire still in me to go and do what I do.  What I get to do is a privilege and a blessing.”

In endorsing her book country music great Randy Travis wrote: “From the very early years of my youthful career, through these days of waning ability, Lulu Roman has been an unexplainable constant in my life….she is an angel on earth.”

BOOK NOTES:  This Is My Story, This Is My Song arrives on bookshelves from England Media Publishing as a hardcover ‘collector’s edition’ presentation of 250 pages with a lavish spread of more than 200 photos — many in color. Official July 1 pub date. Retail $19.99.

ORDER THE BOOK: Online at: www.luluromanbook.com  Autographed copies may be ordered online.  Also available at Amazon.com

The author of this story, Michael Ireland, is a self-supported media missionary with ANS. Click here to support him as a missionary journalist.
July 10, 2019
FacebookTwitterPinterestEmail