Top Posts
Pregnancy Resource Centers Fight For Life Amidst Opposition
This World is Not Our Home
Lessons Learned From a Gingerbread House
Let There Be Peace on Earth
‘I Wanna Dance’ movie: Whitney Houston’s success and...
Fact Finding, Sight Seeing, and Prayer Walking
Kidney donation led to 8 life-saving surgeries
The Power of Curiosity
When Love Came Down at Christmas
A Walk of Faith Begins with a Step...
Home Tags Posts tagged with "Times of Fire – The Seven Churches of Revelation.”"

Times of Fire – The Seven Churches of Revelation.”

GRAPEVINE, TX (ANS)  — Filmed in Greece and Turkey in the cities of the original 7 Churches, Times of Fire dives into the intense political, social and philosophical complexities of each city and church in the first century.

These highly charged regions propelled the flames of persecution, which took the lives of countless believers and exiled the Apostle John to the island of Patmos. As each city is visited, fascinating connections are made to unlock the mysteries of the text in Revelation, providing clues that are relevant today. 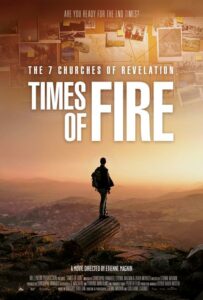 Poster artwork for Times of Fire

Timothy Mahoney of Thinking Man Films and Director of The Patterns of Evidence series will join with Millenium-Production’s Producer and Filmmaker, Christophe Hanauer, for the global release of the documentary feature film, Times of Fire – The 7 Churches of Revelation.

This initial feature film in the series introduces Times of Fire to English speaking audiences this year. The nationwide U.S. theatrical Fathom event and worldwide eCinema event will be held in October 2021. Watch for further releases in German and French in 2022.

“When I first learned about The 7 Churches of Revelation project, I knew that this was an extraordinary project. With its amazing cinematic quality, I was transported to the Island of Patmos where the Apostle John was given this End of Days Revelation for these 7 Churches. Exploring the original locations of the churches in Turkey unlocked insights into the letters faithfully shared by John,” Mahoney said.

“I knew that I had to help this young French filmmaker, Christophe Hanauer, when he asked if I would use my experience with Patterns of Evidence films to help him in the worldwide distribution of Times of Fire – The Seven Churches of Revelation.”

Many are asking, “Are these the Last Days that the book of Revelation is pointing to?” We need to know what Christ was telling these churches and why. How shall we prepare our hearts and minds for an uncertain future? How can we protect our own families from falling away and growing lukewarm in faith?

“This is why I have come alongside Times of Fire – The 7 Churches of Revelation. It’s a message of both warning and encouragement for the Church worldwide. Let us prepare ourselves to be faithful and true to the end,” Mahoney said.

“Millenium-Production is very honored to collaborate with investigative producer Timothy Mahoney for the project. We purpose to build a bridge between Europe and the U.S. for faith-based films and documentaries,” said Christophe Hanauer, Millenium-Productions  .

“As a French first-time filmmaker, my desire to create Times of Fire – The Seven Churches of Revelation was born out of years of personal study of the eschatological theses. This study led me to explore the mysterious questions surrounding the letters Jesus shared with the Apostle John through a series of visions.

“It seemed essential to travel to the places described in Revelation and begin an exchange with scholars and specialists on these subjects. My hope was to bridge the gap between historical and archaeological reality. Now, I want to share these exciting discoveries. The question of the end of time, being our collective and individual consciousness, are of global interest, to the believer and non-believer. In this film, you will discover an urgent message for today.”

Screenings of Times of Fire – The Seven Churches of Revelation will take place at the 2021 NRB  Convention at the Gaylord Texan Resort and Convention Center in Grapevine, Texas, on Wednesday, June 23rd and Thursday, June 24th. Check the NRB app or online schedule for exact location and time, or email: Jane Bjork at jbjork@thinkingmanfilms.com