Top Posts
Colorado football coach Sanders’ unabashed faith
There’s A Light That Enters Houses With No...
Knowing the One Who Always Keeps His Word
Pregnancy Resource Centers Fight For Life Amidst Opposition
This World is Not Our Home
Lessons Learned From a Gingerbread House
Let There Be Peace on Earth
‘I Wanna Dance’ movie: Whitney Houston’s success and...
Fact Finding, Sight Seeing, and Prayer Walking
Kidney donation led to 8 life-saving surgeries
Home Tags Posts tagged with "Trash Picker"

WILLS POINT, TEXAS (ANS) — According to Gospel For Asia, six-year-old **Bir scavenged for usable plastic bags. His parents used them to tote home-grown vegetables to sell at the market.

Being the youngest of three boys, Bir perhaps had the easiest job. The rest of his time was filled with household chores and going to school—neither of which he did very successfully. 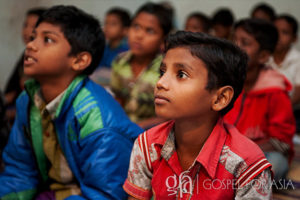 Bir, like the boy pictured, excelled in school through the care and tutoring at Bridge of Hope

**Bir, like the boy pictured, excelled in school through the care and tutoring at Bridge of Hope.

Bir’s village was located in rural fields. Villagers diligently worked the land, which relinquished just enough crops to feed hungry bellies. Chicken farmers even took on a summer crop to supplement their income. Life was difficult there; the word “abundant” was scarcely known.

Gospel For Asia says going to school was not Bir’s favorite thing to do. Sitting in class, Bir kicked at the scavenged plastic bag next to him, which held his notebooks. He just couldn’t get the information in those books transferred into his head. His stomach rumbled; his skin felt sticky with sweat and dirt; and the teacher’s words were incomprehensible to his undisciplined mind.

With terrible grades in the core subjects of math, science and English, there was little hope Bir would have a future outside the fields. With no hope for change, motivation shriveled inside the little boy. This was his life and it had been the life of generations past and would be the only life available, as far as Bir could see.

Keeping the status quo had been important to villagers like Bir’s father. Tradition ensured stability, even as it cemented poverty. Whenever pastors or missionaries visited the village, their activities were censored and movements restricted. Suspicion blanketed those with a belief other than the traditional one of the village. The community was closed to change of any kind.

Then, one day, some people came to share about a program called Bridge of Hope. They wanted to start a center in Bir’s village and held a meeting for village leaders and parents. Bir’s parents attended. They heard how Bridge of Hope would support their son’s education, equipping him with school supplies and tutoring. Inspired by the future possibilities for their son, Bir’s parents signed him up immediately.

The whole village was curious about Bridge of Hope. Many families wanted to enroll their children, seeing this as the best chance for a brighter future. Change in this form was gratefully embraced.

As the years went by, Bridge of Hope became essential to the community. Ten years into serving Bir’s community, the program had 146 children enrolled, with many already graduated. Parents like Bir’s father saw incredible changes in their children. The children were more helpful at home by working diligently at their chores. They were more respectful to their parents, and they started to excel in school.

Gospel ForAsia says that after joining Bridge of Hope, Bir’s whole life changed. With tutoring from the staff, his grades began to improve. When he saw he was capable of learning, Bir was motivated to work harder. He studied diligently and began to see possibilities for his future open up. By the end of 10th grade, Bir stood at the top of his class.

Bir achieved academic excellence with the help of Bridge of Hope. Impressive grades firmly in hand, the path to college opened before him. Pursuing a degree became Bir’s new dream, one he had everything he needed to attain.

Bridge of Hope brought the world outside Bir’s village to his door step. He, and the rest of the children in the center, can now improve the lives of future generations as they pursue careers in and out of the fields.

**Names of people and places may have been changed for privacy and security reasons. Images are GFA stock photos used for representation purposes and are not the actual person/location, unless otherwise noted.

The author of this story, Michael Ireland, is a self-supported media missionary with ANS. Click here to support him as a missionary journalist.
July 16, 2019
FacebookTwitterPinterestEmail