Top Posts
Colorado football coach Sanders’ unabashed faith
There’s A Light That Enters Houses With No...
Knowing the One Who Always Keeps His Word
Pregnancy Resource Centers Fight For Life Amidst Opposition
This World is Not Our Home
Lessons Learned From a Gingerbread House
Let There Be Peace on Earth
‘I Wanna Dance’ movie: Whitney Houston’s success and...
Fact Finding, Sight Seeing, and Prayer Walking
Kidney donation led to 8 life-saving surgeries
Home Tags Posts tagged with "Tyndale House Publishers"

CAROL STREAM, ILLINOIS (ANS) — In 1988, a group of young editors and youth pastors were charged with creating a first-of-its-kind study Bible in a joint venture between Tyndale House Publishers and Youth for Christ.

Their project? A Bible that in just one volume included notes, explanations, and other resources to enable a reader to better understand the spiritual truths in the Scripture text and how to apply them to everyday experiences. 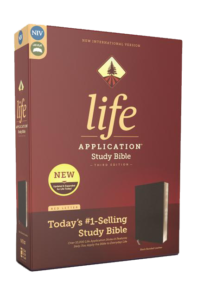 What began as a first draft scribbled on index cards became the Life Application Study Bible (LASB) which, to date, has sold more than 20 million copies in the US alone, making it the #1–selling study Bible in history.

More than three decades later, the original group of editors who shaped the first edition of the LASB have returned to the project, collaborating with a next-generation team including many female editors to produce the Life Application Study Bible, Third Edition, which will be available on October 1.

Some 76 people contributed to the third edition of the LASB, which introduces the most revisions, updates, and additions in nearly two decades. While retaining the core timeless content, it is substantially different from earlier editions.

All the feature content was closely reviewed, and significant changes were made to most of the study and application notes, book introductions, profiles, charts, and maps. The comprehensive rewrite of the features was done to reflect how people speak and write today.

The younger editors who joined the veteran team helped shape the content to reflect contemporary language and tone and contributed to the treatment of today’s issues. In addition to the extensive edits, many features were also added, making more than 1/3 of the content new.

“The third edition of the Life Application Study Bible is truly a Bible for all people and for all times,” said Tyndale brand director Jim Jewell.

“The core of the LASB is, of course, the text of the Bible, which is a Christian’s guidebook in every era and every situation. The greatly enhanced life application material in the third edition helps bring the Bible’s teaching into focus—for whatever issues people are dealing with, and at any point in their lives. For today, and for all times.”

Since its founding in 1962, Tyndale House Publishers has been a voice to trust for generations of readers and, today, is one of the largest independent Christian publishers in the world.

Tyndale’s independent status allows it to follow its founding model, giving a majority of annual revenue to charitable missions—more than $100 million throughout its history. With every book purchased, Tyndale readers help meet the physical and spiritual needs of people around the world.

The third edition will be simultaneously released by Tyndale House Publishers and Zondervan, available in both the NLT and the NIV translations and in a variety of covers and bindings. To learn more, visit www.LifeApplication.com  or www.NIVLifeApplication.com .

The author of this story, Michael Ireland, is a self-supported media missionary with ANS. Click here to support him as a missionary journalist.
September 27, 2019
FacebookTwitterPinterestEmail