Top Posts
Colorado football coach Sanders’ unabashed faith
There’s A Light That Enters Houses With No...
Knowing the One Who Always Keeps His Word
Pregnancy Resource Centers Fight For Life Amidst Opposition
This World is Not Our Home
Lessons Learned From a Gingerbread House
Let There Be Peace on Earth
‘I Wanna Dance’ movie: Whitney Houston’s success and...
Fact Finding, Sight Seeing, and Prayer Walking
Kidney donation led to 8 life-saving surgeries
Home Tags Posts tagged with "Typhoon Vamco"

RICHMOND, Virginia (ANS) — Dozens of people were left dead last week as tsunami-like waves covered villages in mountains of mud as the result of  Typhoon Vamco in The Philippines.

Missionary journalists Bill and Ivy Bray of CIS NEWS frequently report from The Philippines for Assist News, and are currently raising funds for Typhoon Vamco child victims in The Philippines. 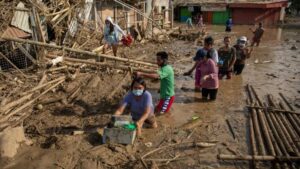 Bill Bray of CIS Missions of Charlottesville, Virginia, told ANS, “In a bizarre twist of events, thousands of young children, used to going barefoot, are facing infections and disease from puncture wounds suffered by walking barefoot in the flood waters.

“Many areas are still covered with several feet of dangerous mud and debris in Nangka, Marikina City. Government crews and volunteers say it will take weeks to complete the cleanup efforts.”

CIS Missions of Charlottesville, Virginia, is sending emergency aid to victims. CIS is handling US donations and will be forwarding funds to PARTNERS International Ministries in The Philippines.

Already, emergency funds have been sent to protect 200 children endangered by deadly infections carried by the flood of mud in Nangka, Marikina City. You may contact Bray at Bray.william@gmail.com