Top Posts
Colorado football coach Sanders’ unabashed faith
There’s A Light That Enters Houses With No...
Knowing the One Who Always Keeps His Word
Pregnancy Resource Centers Fight For Life Amidst Opposition
This World is Not Our Home
Lessons Learned From a Gingerbread House
Let There Be Peace on Earth
‘I Wanna Dance’ movie: Whitney Houston’s success and...
Fact Finding, Sight Seeing, and Prayer Walking
Kidney donation led to 8 life-saving surgeries
Home Tags Posts tagged with "UNCC Shooting"

CHARLOTTE, N.C. (ANS) — The Billy Graham Rapid Response Team mobilized quickly to the shooting at UNC Charlotte. In the early evening hours of the final day of classes for the spring semester, the campus of the University of North Carolina at Charlotte was locked down as an active shooter opened fire.

Reports have said that two students were killed and several more were injured.

While investigators were taking the suspected shooter into custody and making sure the campus was secure, the Billy Graham Rapid Response Team (BGRRT) quickly made their way to the staging area where families were being reunited. 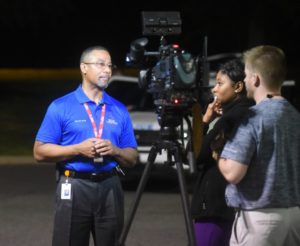 RRT Chaplain Kevin Williams on the scene of the UNCC shooting.

BGRRT Chaplains are coming alongside and offering comfort to the students, parents, staff, and first responders who are now trying to make sense of this tragedy.

“Our chaplains respond to tragedies around the world, and now we are in our own community – heartbroken at the events that have unfolded tonight,” said Jack Munday, international director of the Billy Graham Rapid Response Team.

“Across the country, people are praying for the UNCC family, and we join them in praying for the loved ones of the students killed, as well as for the first responders, staff, and city of Charlotte,” he said.

RRT chaplain Kevin Williams talked with a news crew in the Harris Teeter parking lot near the school’s campus. His son is a UNCC student and normally would’ve been in the classroom across from where the shooting occurred.

The Billy Graham Rapid Response Team was formed in the days following the terrorist attacks of Sept. 11, 2001. Since that time, the crisis-chaplaincy ministry has come alongside and supported survivors following dozens of shooting-related tragedies in the United States and abroad including Santa Fe High School in Santa Fe, Texas, Marjorie Stoneman High School in Parkland, Fla., and Marshall County High School in Benton, Ky., in 2018.

The Team has since grown into an international network of chaplains in the U.S., U.K., Canada and Australia who are specifically trained to deal with crisis situations. They have deployed to more than 300 disaster sites, including shootings, floods, hurricanes, wildfires, and tornadoes.

Franklin Graham, president, and CEO of the Billy Graham Evangelistic Association appealed for prayer on his Twitter account saying, “Join me in prayer for the families of those who lost loved ones and for those injured in this senseless act at UNC Charlotte.”

For more information on the ministry, including videos, photos, news articles and an interactive map of former and current deployments, visit www.BillyGraham.org/rrt.  Updates can also be found at www.facebook.com/RRTChaplains.