Top Posts
Colorado football coach Sanders’ unabashed faith
There’s A Light That Enters Houses With No...
Knowing the One Who Always Keeps His Word
Pregnancy Resource Centers Fight For Life Amidst Opposition
This World is Not Our Home
Lessons Learned From a Gingerbread House
Let There Be Peace on Earth
‘I Wanna Dance’ movie: Whitney Houston’s success and...
Fact Finding, Sight Seeing, and Prayer Walking
Kidney donation led to 8 life-saving surgeries
Home Tags Posts tagged with "University of Virginia"

CHARLOTTESVILLE, VIRGINIA (ANS) — “Fan Frenzy” gripped 21,000 University students over the weekend as they celebrated a Christian coach and his championship UVA Cavaliers Basketball Team over the weekend.

“Rarely in the history of collegiate basketball has the faith of a college coach and his star players been so widely recognized,” said Bill Bray, an ASSIST News Service correspondent who attended the event. 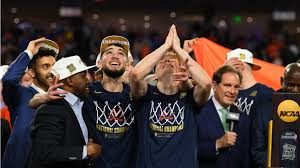 A UVA basketball player raises his hands in prayer of thanks

“In local churches and at the huge victory rally on Saturday, people praised the Lord for the UVA March Madness win over Texas Tech Red Raiders last week. The NCAA triumph was the first-ever national championship for UVA,” Bray said.

University of Virginia Basketball Coach, Tony Bennett, is an outspoken Christian and he emphasizes five Biblically-based pillars of training taken from the model life of Jesus Christ — humility, passion, servanthood, thankfulness and unity. Bennett became a Christian while attending a Fellowship of Christian Athletes (FCA) camp at age 14.

“The winning coach and team were full of thanks and praise to God, even crediting the impact of the Christian Contemporary hit ‘Hills and Valleys’ for inspiring them in their long run to victory,” said Bray.

Bray added: “The victory rallies lasted all night Monday and throughout the day Tuesday but were peaceful and without violence as delirious students burned coaches, climbed light poles and traffic signal towers.”

Virginia Guard Kyle Guy is also outspoken. Alyssa Murphy, a reporter for the National Catholic Register, says he relies on faith whenever he takes to the court. He overcame a recent injury, he says, “with my faith in the Lord, and my team.”

Jay Huff, Virginia’s Forward, joined the large Chi Alpha Christian Fellowship and finds balance and friendship in weekly Bible study sessions. Like hundreds of others in the growing Chi Alpha group at the University here – he is helping to keep spiritual values alive at the overwhelming secular school.

In a Minneapolis post-game interview with CBS Sports, Coach Bennett said he played the song “Hills and Valleys” by Tauren Wells before the decisive game.

“You’re never alone in the hills or the valleys,” he said, “And we faced those from last year to this year, but the credit goes to these young men. And I can’t wait to celebrate with my wife and my kids and my parents. I do want to thank the Lord and my Savior.”

Bray stated it has been a rough year for the UVA team. “Last year they were the number one seed only to lose to a number 16 seed. So, this year they have come from ‘worst to first’ in the annual tournament.”

After the buzzer sounded and the Cavaliers earned their first national championship, Coach Bennett bowed his head in prayer. The first thing he said was “I’m humbled Lord.”

“This win was number 301 in his career,” said Bray. “He came to UVA in 2009 and is the 11th coach in the history of the University of Virginia basketball program.  He says he considers intercessory prayer for the student’s part of his program and he prays for each player regularly; for their health and relationships.”

Last year, after they lost the national championship, Bennet was mocked by some sceptics after he quoted Psalm 30:5, “Weeping may endure for the night, but joy comes in the morning.”

Bray concluded: ”This week is that ‘joyful morning’ here at the University of Virginia as this proud, secularized, Ivy League campus takes a moment to thank God for a special victory.”