Top Posts
Knowing the One Who Always Keeps His Word
Pregnancy Resource Centers Fight For Life Amidst Opposition
This World is Not Our Home
Lessons Learned From a Gingerbread House
Let There Be Peace on Earth
‘I Wanna Dance’ movie: Whitney Houston’s success and...
Fact Finding, Sight Seeing, and Prayer Walking
Kidney donation led to 8 life-saving surgeries
The Power of Curiosity
When Love Came Down at Christmas
Home Tags Posts tagged with "US President Donald Trump"

NEW YORK (ANS) – In what is a first for a sitting US President, Mr. Trump spoke on the issue of religious freedom at the U.N. (Monday, Sept.23) where he issued a global call to protect religious freedom.

“Today with one clear voice the United States calls on all nations of the world to end religious persecution,” Mr.Trump said.

“Approximately 80% of the world’s population live in countries where religious liberty is threatened, restricted or even banned,” Mr.Trump said. 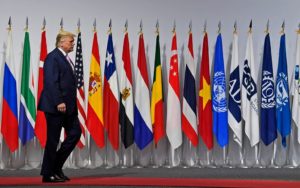 US President Donald Trump at the UN

TIME magazone reported that Mr. Trump’s speech Monday extends a long-running focus on international religious freedom that speaks to a key priority of his evangelical base. His administration has hosted annual meetings on the topic in Washington, and Secretary of State Mike Pompeo announced during this year’s event that he would create an international alliance dedicated to the issue.

TIME also quoted Dallas-based pastor Robert Jeffress who praised Mr. Trump for focusing on religious freedom instead of climate change. “What president in history would have the guts to do what President Trump is doing?”

The president also announced that his administration would dedicate an additional $25 million to protecting religious sites and places of worship and launched a new coalition of business leaders to promote religious freedom.

ADF International Director of Global Religious Freedom Kelsey Zorzi, president of the United Nations’ NGO Committee on Freedom of Religion or Belief, said: “Religious freedom is a fundamental right that all countries are called to protect. The president’s speech is an important and historic moment precisely because religious freedom is too often ignored or downplayed at the U.N.

“At a time when persecution is on the rise, and over 80% of the world’s population lives in countries with high restrictions on religious freedom, every country should make securing religious freedom a high priority.”

ADF a faith-based legal advocacy organization that protects fundamental freedoms and promotes the inherent dignity of all people.