Top Posts
Colorado football coach Sanders’ unabashed faith
There’s A Light That Enters Houses With No...
Knowing the One Who Always Keeps His Word
Pregnancy Resource Centers Fight For Life Amidst Opposition
This World is Not Our Home
Lessons Learned From a Gingerbread House
Let There Be Peace on Earth
‘I Wanna Dance’ movie: Whitney Houston’s success and...
Fact Finding, Sight Seeing, and Prayer Walking
Kidney donation led to 8 life-saving surgeries
Home Tags Posts tagged with "Van Gogh Balloon" 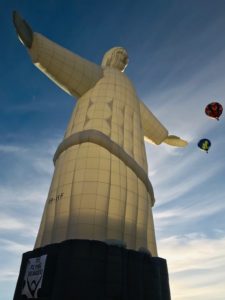 ALBUQUERQUE, NEW MEXICO— Thousands watch as Christ ascends at the 2018 Albuquerque International Balloon Fiesta, held in Albuquerque, New Mexico. Of course, the real ascension occurred over 2,000 years ago, viewed by an assembly of disciples.  As Luke records: “Now when He [Jesus] had spoken these things, while they watched, He was taken up, and a cloud received him” (Acts 1: 9).

So it goes in New Mexico during the 47th annual event that draws hundreds of thousands of visitors every October. This year’s theme–with a sponsorship by Canon–is “Carry Me Away.” 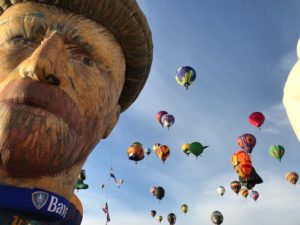 In addition to the Christ the Redeemer hot air balloon, balloons such as Van Gogh, a new shape from the Netherlands, was present. In all, balloonist from roughly sixteen nations are in attendance, ranging from England, Brazil, Belgium, Netherlands, Spain, Ireland, France, Russia, Australia, Mexico, Canada, Taiwan, and Thailand.

The Albuquerque International Balloon Fiesta began in 1972 as a promotion of a local radio station, KOB-AM.  Balloonist took flight from a local shopping mall.  In 1975 the event became the Balloon Fiesta, moving to its current location at Balloon Fiesta Park.

Throughout the late 70’s and early 80’s, the Fiesta adds new attractions: the Balloon glow (nightly balloon illumination), Shape Rodeo (balloons of differing shapes lifting off together), and balloon races. 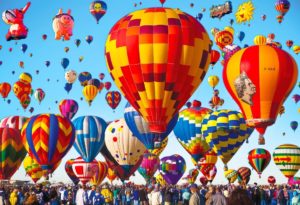 During Balloon Fiesta, guests can expect to see more than 500 balloons participating in early morning Mass Ascensions, enchanting Special Shape balloons filling the skies, and, in the evening, 200 balloons light up the evening sky with Balloon Glows and spectacular fireworks. All of the balloons launch from Balloon Fiesta Park, a 78-acre grassed field – the size of 56 football fields – that serves as the launch field for all flying events.

The Most Photographed Event in The World 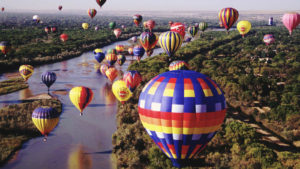 Balloons fly over the Rio Grande River in Albuquerque

According to the website, It’s A Trip, The Balloon Fiesta is the most photographed event in the world: “For nine days during the first full week of October, hundreds of colorful balloons float above the city each morning as dawn breaks over the Sandia Mountains. It’s no wonder this visual feast is said to be the world’s most photographed event.”

People from around the world descend upon Albuquerque to attend the Fiesta.  I was aware of people from Korea, Europe, Central and South America, Russia, and Canada. It’s truly international.  A British man, running from the East coast to the West coast of the United States, is told by his father to stop in Albuquerque to view the event.  He does, running through Albuquerque in order to attend the Fiesta.  With long beard and slender build, the runner is in awe of the spectacle of hundreds of balloons taking flight.  It’s an event one has to see to believe.