Top Posts
Pregnancy Resource Centers Fight For Life Amidst Opposition
This World is Not Our Home
Lessons Learned From a Gingerbread House
Let There Be Peace on Earth
‘I Wanna Dance’ movie: Whitney Houston’s success and...
Fact Finding, Sight Seeing, and Prayer Walking
Kidney donation led to 8 life-saving surgeries
The Power of Curiosity
When Love Came Down at Christmas
A Walk of Faith Begins with a Step...
Home Tags Posts tagged with "Victory Bible Academy"

MYANMAR (ANS) — In Myanmar, monsoon rains have led to a landslide, killing at least 51 people and reportedly leaving dozens more missing. It’s believed to be the deadliest natural disaster to hit the country’s southeast in decades, according to World Magazine. 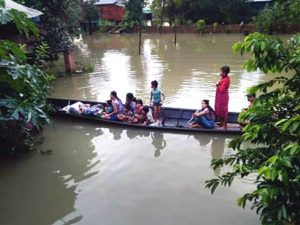 The ministry says monsoons in Myanmar flooded local towns and have caused landslides. At least 51 people are dead, and 105,000 have been displaced. It is possibly the deadliest natural disaster in the region in decades.

A CFI team left early morning for Myanmar and each member was chosen for specific talents. A Victory Bible Academy graduate with experience in flood relief and construction joined the team.

One village elder said flood water has risen, forcing the evacuation of 90 homes. A Primary school was abandoned and the students all moved to the local community centre.

The ministry said one CFI team went as far as they could by truck, and then transferred to boats.  Once in the village they found 90 families without access to food and water.

“The goal was to bring joy to the children through games, and songs while others transport supplies with fellow Christians from Thailand,” the ministry said in an update.

The ministry said one complication in the area is that the Burmese military stopped the resupply team. “After debate on who the supplies were for, one CFI team member was sent back to Thailand. He didn’t have proper paperwork, but thankfully the military allowed the CFI team to continue on.”

As the rained stopped, the reprieve allowed the CFI team an opportunity to inspect the village. The team said damages were extensive, but within a few hours the waters receded enough for some families to return to their homes.

In the early morning, the CFI team will reconnect with the ARK Initiative to begin food and water distribution.  Once completed, the CFI team will begin classes with village children while others assist villagers with repairing their homes.

“Pray the rain stays manageable, that the repairs aren’t as extensive as they appear, that the supplies are enough to bridge the gap and that the children see this as an adventure instead of destruction,” a ministry spokesman said.

The next day, the CFI team awoke to a beautiful sunrise and far lower water.

“They prayed, worshipped and gave thanks. After prayer, some visited the village children while others helped distribute supplies and clean the primary school. The kids were thrilled to be doing something fun instead of trembling, cold, wet, hungry and fearful,” the spokesman said.

Later, the CFI team went door-to-door to pray with families. “Most are Buddhist, but accept the prayers and sincerely thank the team for coming.”

By nightfall the water was lower and the villagers’ prayers were answered through this group of Christians. The CFI team returned to Victory Bible Academy — tired, sore and filled with stories.

Last week, the village elders left their flooded area and got to a main road only to see truck after truck drive by with workers and supplies bound for other villages. The spokesman said that no matter what they said, no one would help them.  “The supplies were instead directed to areas that openly support the current government.”

With the help of the ARK Initiative, CFI’s Victory Bible Academy was able to assist where others wouldn’t.

CFI Team’s Action Plan to help in the area is as follows: