Top Posts
Pregnancy Resource Centers Fight For Life Amidst Opposition
This World is Not Our Home
Lessons Learned From a Gingerbread House
Let There Be Peace on Earth
‘I Wanna Dance’ movie: Whitney Houston’s success and...
Fact Finding, Sight Seeing, and Prayer Walking
Kidney donation led to 8 life-saving surgeries
The Power of Curiosity
When Love Came Down at Christmas
A Walk of Faith Begins with a Step...
Home Tags Posts tagged with "Vincent van Gogh"

A review of Julian Schnabel’s At Eternity’s Gate 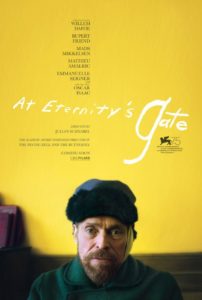 ALBUQUERQUE, NEW MEXICO—I’ll be honest: I was unable to watch much of Julian Schnabel’s At Eternity’s Gate, his biopic movie about Vincent van Gogh, starring Willem DeFoe. And it wasn’t because of the content; it was the cinematography shot by Benoit Delhomme. With a POV (point of view) perspective, the camera was continually on the move, off-kilter and wobbly.

By mid-movie I was motion sick. I got up once to get my bearing. When I returned, I did something I normally wouldn’t:  I sat with my eyes closed and listened to the film.  It’s a strange thing to do for a movie with little dialogue, centered on an artist whose  creative work transformed the art world. But I had little choice: sickness or visual saturation.

After the film, my wife, Melanie, pointed out that Schnabel may have used the camera work to represent van Gogh’s brush strokes: swirling, thick, with great motion. Her comment caused me to wonder if Schnabel used Benoit Delhomme’s POV positioning to suggest van Gogh’s state-of-mind: movement towards madness.  If we are correct, Schnabel did a marvelous job: he recreated the sickness in van Gogh’s head (alluded to several times in the movie) and his brilliant brushstrokes.  I just wish I was able to watch it unfold.

The Bible Is My Solace 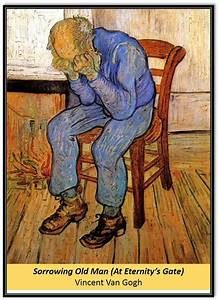 All this said, listening to the movie gave me a different perspective, highlighting van Gogh’s deep, if misunderstood Christian faith.  To help frame his faith, I suggest a quick read of a previous article I wrote, found here. In the article you’ll learn about van Gogh’s Christian influences: his father, Charles Spurgeon, Jesus, and the Bible.  Van Gogh stated, “The Bible is my solace, my support in life. It is the most beautiful book I know.” Van Gogh even attempted missionary work.  Sadly, the church, like the art world after his ministry attempt, dismissed van Gogh.

Van Gogh’s faith came through in several ways in At Eternity’s Gate.

First in his love of creation.  Van Gogh saw nature as a presentation of God’s grace in the world, the first book God wrote (the second, the Bible). Van Gogh felt at home in the natural world.  During the first half of the movie, I noticed Schnabel captured this love by keeping the camera still while van Gogh painted nature—a still-life, landscape, or human; there was peace, stillness, and a hush.   Also, van Gogh’s interaction within nature demonstrated his communion with God’s handiwork: lying in fields, touching dirt, and seeking the sun.

Second, in his conversation with a priest, van Gogh shows respect and admiration of Jesus.  In a carefully crafted dialogue, van Gogh discusses his passion of art and his trials in ministry, noting the world’s rejection of his art and ministry. Van Gogh likens his rejection to Christ’s rejection by the world. Van Gogh stated–though not mentioned in the movie, “Jesus is an artist greater than all other artists.” In the end, van Gogh felt he was created by God to paint, fulfilling his calling as an artist, the only thing he felt he could do well. 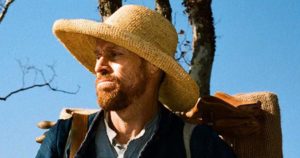 Third, as the name of the movie indicates, van Gogh’s vision was on eternity, through art and his soul.  In a couple of places in the movie, van Gogh mentions eternity, saying, “I see nothing but eternity.”  Maybe van Gogh realized his art would stand in the eternal halls of history as masterpieces; similarly, van Gogh clearly understood he was a pilgrim in the world, destined for infinitude.

Another aspect of listening to the second half of the movie allowed me to concentrate on the music.  The soundtrack by Tatiana Lisovskaya paired well with Schnabel’s scenic vision; it was brooding, off-kilter, and beautiful—all at the same time. 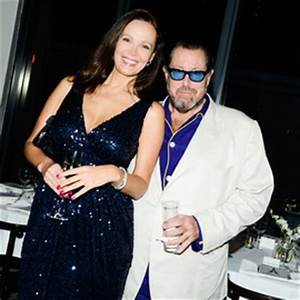 Hollywood Reporter, David Rooney, connects the two aspects—music and camerawork, writing, “In many ways an abrasive, wildly uneven film — raw and deliberately unvarnished in style, shot by Benoit Delhomme with a nervous handheld camera and lots of wide-angle lenses that mirror the darting restlessness and the uneasy perspective of a troubled mind. Even the score by Tatiana Lisovskaya favors dissonance and distortion, it’s plinking notes hammered out on what sounds like a beat-up old barroom piano in need of tuning…”

When you add Willem Dafoe’s amazing acting to the picture, the movie is well worth watching. Dafoe does a masterful job in portraying the gradual maddening, socially scorned human being.  But I suggest watching At Eternity’s Gate on a small screen or take Dramamine when you see the movie. 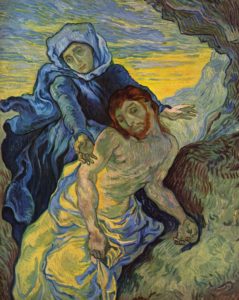 Even more, let At Eternity’s Gate help the church recognize the artists within her midst, encouraging them, listening to them, supporting them, and, hopefully, seeing them as a vital part within the Body of Christ.

In the end, At Eternity’s Gate is a portrait of grace:  God gifting His unmerited favor to all people—deserving or undeserving, affording us a picture of His Person in the genius of an artist of a man, van Gogh.