Top Posts
There’s A Light That Enters Houses With No...
Knowing the One Who Always Keeps His Word
Pregnancy Resource Centers Fight For Life Amidst Opposition
This World is Not Our Home
Lessons Learned From a Gingerbread House
Let There Be Peace on Earth
‘I Wanna Dance’ movie: Whitney Houston’s success and...
Fact Finding, Sight Seeing, and Prayer Walking
Kidney donation led to 8 life-saving surgeries
The Power of Curiosity
Home Tags Posts tagged with "White Horse Prophecy Romney"

The ongoing feud between Sen. Mitt Romney and President Trump goes back to the 2016 presidential campaign and 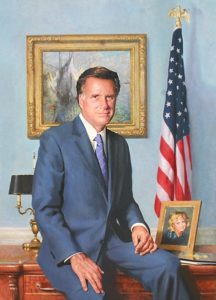 has waxed and waned ever since. Most recently, it has erupted at a fever pitch, leaving at least a few to wonder if Romney is consciously or subconsciously fulfilling a prophecy uttered by Joseph Smith in 1843.

“Our great-grandfathers were friends and bonded over the fact they were both arrested for polygamy at the same time, in 1884,” writes Judith Freeman in the L.A. Times. While Freeman left the LDS Church, she has vivid memories growing up in a Mormon household in the 1950s.

Her great-grandfather, William Flake, lent Romney’s ancestor $1000 to post bail related to the polygamy charge, but was never repaid. Instead, Miles Romney fled to Mexico with his wives and children.

Freeman’s other connection with Romney relates to an unusual prophecy she heard as a youngster. “It’s something every child growing up in a Mormon household in the 1950s had drilled into their heads,” she notes.

“One day,” we were told, “the Constitution of the United States will hang by a thread and a Mormon, or group of Mormons, will save the nation.”

The founding prophet of the church, Joseph Smith, made the so-called “White Horse Prophecy” in 1843. To lend drama to the pronouncement, he uttered the words while standing in front of a copy of the apocalyptic painting, “Death on a Pale Horse,” by the artist Benjamin West.

Today, the LDS church distances itself from the prophecy, but for years it was repeated by bishops, prophets and leading Mormon politicians such as Orrin Hatch, according to Freeman.