Top Posts
Knowing the One Who Always Keeps His Word
Pregnancy Resource Centers Fight For Life Amidst Opposition
This World is Not Our Home
Lessons Learned From a Gingerbread House
Let There Be Peace on Earth
‘I Wanna Dance’ movie: Whitney Houston’s success and...
Fact Finding, Sight Seeing, and Prayer Walking
Kidney donation led to 8 life-saving surgeries
The Power of Curiosity
When Love Came Down at Christmas
Home Tags Posts tagged with "Wildlife Conservation Society"

NAMPA, ID (ANS) — The tail of the airplane wasn’t just damaged. It had been eaten!

Roger Clark of Mission Aviation Fellowship (MAF) says: “I was in central Mozambique helping with a long inspection of an MAF Cessna 206 when the call came in from the Niassa Game Reserve in the far north of the country, nearly up into Tanzania.

“MAF has long supported conservation work in this, the largest game (animal) reserve in Africa. The Wildlife Conservation Society flies their Cessna 206 in this 42,000 square kilometer reserve, providing anti-poaching and game counting flights. Now their airplane was grounded thanks to a hungry hyena that chewed on the airplane …” 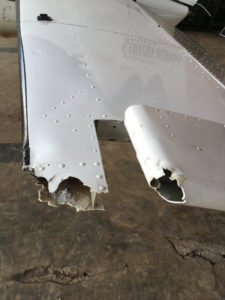 A hungry hyena ate part of the plane

Clark said it was a treat to be back in his old stomping grounds of South Africa, Lesotho, and for the first time, Mozambique.

“MAF Moz has been around for 20 years, serving one of the poorest countries in the world. A country whose flag features an assault rifle, a lingering symbol like the lingering effects the 16-year civil war had on Mozambique’s 30 million people.”

He continued: “Last year I heard that their Cessna 206 was down for a long inspection and had hoped that I could go and help get it done, as they are short staffed, especially short on mechanics.”

His health kept him home last year, but he was surprised to hear that the plane was still languishing for a mechanic this year.

“Feeling good, I made plans to head to Moz in April. My main goal was to complete the landing gear portion of what we call a 1000-hour inspection.

“Every 1000 hours of flying (around 5 years in this case), the airplane is disassembled, and every system and sub system inspected, cleaned, repaired, lubricated, in some cases repainted, reassembled and tested. This is a big job and tough on an MAF program that doesn’t have a full-time mechanic, aka ‘maintenance specialist.’

“In my three weeks there I was able to get the landing gear portion of the inspection completed. This is one of my favorite Cessna 206 jobs, so it was a real treat!”

Clark said that for the past few years, MAF has been supporting medical work in the Niassa Game Reserve by flying doctors and dentists into remote villages “trapped” within the game reserve.

“When the opportunity arose to combine a two-day dental clinic with a ‘rescue mission’ to fix the Wildlife Conservation Society’s Cessna 206, I was the only mechanic around, so I got to go! I think the corresponding five flights over the next two days, visiting remote villages, bringing dental health to the isolated, and, of course, patching up an airplane eaten by a mauling carnivore, were a real highlight of my MAF career.”

Learn more about MAF at: www.maf.org