Top Posts
Living an Imperfect, Unfinished Life
‘Nothing is Impossible’ movie: Hoops, romance, second chances
‘God’s Smuggler’ Brother Andrew passes to his reward
Cultivating a Prayer, Care, Share Lifestyle
God Has Plans for Your Life
Worth and Value in the Kingdom of God
Grandchildren Bring Joy and Opportunities to Our Lives
Embracing Change and Changing Lives
Dark Academia and Dead Monks
She ‘intensely related’ to Mary Magdalene character on...
Home ANS Reports A Trip into Terror and Love

Memories of being in Jordan with a team of American Christian leaders and journalists on September 11, 2001, when we received the shocking news of the terror attacks on America 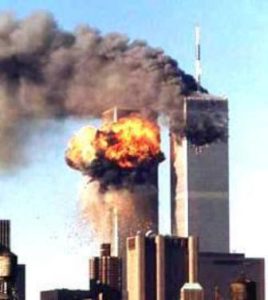 The attack on the Twin Towers in New York

AMMAN, JORDAN (ANS – September 11, 2018) — Today is the 17th anniversary of the devastating 9/11 attacks on America, and my thoughts have returned once again to an extraordinary situation I found myself on that fateful day.

The shocking attacks killed 2,996 people and injured more than 6,000 others. These immediate deaths included 265 on the four planes, 2,606 in the World Trade Center in New York and in the surrounding area, and 125 at the Pentagon in Washington, DC.

The terror began on Tuesday, September 11, 2001, when I was in Gerasa (Jerash), the most complete and best-preserved Greco-Roman city in the Middle East, with a group of 28 American Christian leaders and journalists, and just after we arrived at the site we first heard the news that all hell had broken loose in New York City.

One of our team, broadcast journalist Giles Hudson, received a mobile phone call from the USA Radio Network, in Dallas, Texas, that a plane had slammed into one of the Twin Towers of the World Trade Center Building.

In a state of shock, we were then taken by our Jordanian tour guide to the nearby city of Gadara (modern Um Qais), with its spectacular panoramic views overlooking the Sea of Galilee, the site of Jesus’ miracle of the Gadarene swine, where He sent demented spirits out of two men into a herd of swine who ran down the hill and drowned in the Sea of Galilee (Matthew 8: 28-34), and there we received more information about the second plane crashing into another of the towers. It was if the demons of hate had been unleashed on America and all we could do was to pray for the victims and their relatives.

It was surreal to be in Jordan at the time of the worst terrorist attack in American history. Very soon, we were overwhelmed with the love of the Jordanian people who stopped us at every place we went to offer their condolences.

We were then transported to a hotel by the Dead Sea, and once we were safely in our rooms, we could hear the sounds of a violent gun battle taking place in Jericho, just a short way across the water — and it went on for most of the night. Some of the team stayed up to pray for peace not only in the Middle East, but also in America.

Some of the team even wondered if this was actually the end of the world as we knew it.

The idea for the trip began at the National Religious Broadcasters (NRB) Convention in Dallas earlier that year, when the Jordan Tourism Board and the Jordan Ministry of Tourism launched an effort to educate Americans about the less explored parts of the Holy Land, which extends beyond Israel to encompass all of the land of the Bible. This includes modern-day Jordan, now guardian of more than 200 major biblical sites from both Old and New Testaments. And in April, His Majesty King Abdullah II shared with a small group of pastors in Washington, D.C., about the history, beauty and safety of his country, and invited them to come and visit.

This trip was led by A. Larry Ross, who was then Billy Graham’s top media man, and sponsored by the Jordan Tourism Board (JTB,) and was an extension of that invitation.

Located on the eastern side of the Jordan River, this country is blessed with the rich spiritual heritage of the full story of the history of salvation as recorded in the Bible. Abraham, Job, Moses, Ruth, Elijah, John the Baptist and Jesus were some of the figures of the Bible who performed pivotal elements of their divinely-ordained missions in this ancient landscape that is now within the Hashemite Kingdom of Jordan.

The very name of the country — Jordan — retains the unique baptismal aura of a holy river and a blessed land. It was here, in the waters of Bethany-beyond-the-Jordan, where the Trinity of Father, Son and Holy Spirit first manifested itself explicitly when John baptized Jesus.

God repeatedly designated Jordan as a land of peace and refuge, where Ruth, Elijah, David, Jesus, John the Baptist and the first Christian communities, among others, found safety and peace. Most of the great biblical prophets made their journeys of faith from the east bank of the Jordan River to the west — symbolically moving from the “wilderness” where men and women are tested, to the Promised Land that is the Kingdom of God.

Most of the holy sites in Jordan where the biblical prophets performed miracles, or reached out to ordinary people are identified, excavated and easily accessible to visitors. New sites are being discovered every year. Visitors to Jordan can often visit archaeological excavations and share in the excitement of identifying ancient remains of places where Moses completed his mission from God; where Elijah lived by faith; where John the Baptist preached and heralded the arrival of the Messiah; and where Jesus performed miracles. 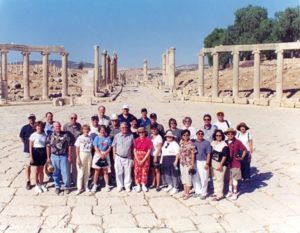 The team in Gerasa, Jordan, minutes before receiving the news of the 9/11 attack in New York.

We spent a tense week in Jordan as all flights from the Arab world had been suspended. But then came the welcome news that Royal Jordanian Airlines had been given permission to fly into JFK Airport in New York and we were told to pack.

Before we left for Amman Airport, we attended a candlelight “Peace Through Understanding” service with nearly 500 Jordanian Christians and Muslims. As we got into the bus to take us to the service, a bellboy at our hotel asked if he could address us on the buses’ PA system. He told us that he had lost some of his family in the fighting in the West Bank and said that he knew what it was to lose members of his family that he loved. “I would like to tell you that I am very sorry for what has happened in America and I want you to know that all of the Jordanian people share in your sorrow.”

We then joined with others in lighting candles for peace at a special candlelight remembrance service at the Citadel in Amman on Sunday, September 16, 2001, to show solidarity with the victims and their families of the New York and Washington terrorist attacks on the World Trade Center and the Pentagon.

Muslims clerics united with Christian priests and ministers from the various Christian communities in Jordan, as well the Lord Mayor of Amman in condemning the violence in the United States and praying for the families of the victims. It was hard for us to hold back the tears at this momentous time in world history.

Ruth Cox Mizell, the then Congressional Liaison for Capitol Hill Prayer Partners and White House Liaison for American Christian Trust, was one of our team and she attended the candlelight service. Ruth, the widow of baseball great “Vinegar Bend” Mizell, said at the time, “I really appreciated their caring for us. They really cared about what happened in New York and at the Pentagon. Everyone was so mournful when they told us how sorry they were about what happened. I have really come to love the Jordanian people.”

After the service, our team headed for Amman Airport, to fly back to New York on Royal Jordanian Airlines on what turned out to be the first flight from an Arab country. Security was tight and we understood that several armed marshals were on the flight.

When we arrived at JFK Airport, a bevy of armed FBI agents and other security met us. Like many, I couldn’t catch the flight I was booked on and so had to find another airline to get back to Southern California. As we took off, I could see the pall of smoke that was still rising from what was the Twin Towers of the World Trade Center.

Like all of you, I will never forget what has happened to our world during that time. However, it was heartening to know that so many from around the world were standing with the American people in love and solidarity and like our friends in Jordan, were lighting symbolic candles for peace.

After such a wonderful insight into the biblical sites of Jordan and meeting the friendly Jordanian people, all I can say is go and see Jordan for yourself. It is a trip of a lifetime for all Biblical scholars and for those who wish to see the Bible come alive in these troubled modern times.

Note: If you are blessed with our many stories, would you consider making a donation to ASSIST to allow us to continue. All you have to do is go to www.assistnews.net and then scroll down to where it says DONATE TO ASSIST NEWS and put in the figure (tax-deductible in the US) you would like to give. If you prefer a check, just make it out to ASSIST and mail it to: PO Box 685, Murrieta, CA 92564, USA. Thank you!

** You may republish this or any of our ANS stories with attribution to the ASSIST News Service (www.assistnews.net). Please tell your friends and colleagues that they can receive a complimentary subscription to ANS by going to the above website and signing up there.