Top Posts
Colorado football coach Sanders’ unabashed faith
There’s A Light That Enters Houses With No...
Knowing the One Who Always Keeps His Word
Pregnancy Resource Centers Fight For Life Amidst Opposition
This World is Not Our Home
Lessons Learned From a Gingerbread House
Let There Be Peace on Earth
‘I Wanna Dance’ movie: Whitney Houston’s success and...
Fact Finding, Sight Seeing, and Prayer Walking
Kidney donation led to 8 life-saving surgeries
Home ANS Feature Abby Johnson and the Movie Unplanned

Anaheim, CA (ANS) – “Unplanned is a movie I never planned on making,” Abby Johnson, the subject of the story shared.

I recently caught up with Abby Johnson at the annual National Religious Broadcasters Convention in Anaheim.  Quite pregnant with her 8th child and fresh off an airplane, she gratefully sat down to rest.

Q. Abby, your movie is opening this weekend in 1000 theaters across the country. Tell us about your story.

“I worked for Planned Parenthood, our country’s largest abortion provider, for eight years of my life. I was a clinic director and also named their employee of the year. In October 2009 I left after witnessing an ultrasound-guided abortion procedure where a live 13-week old baby struggled for his life against the abortion instruments.  I knew then, right at that time, that abortion was something I could never participate in again. I left Planned Parenthood shortly thereafter. 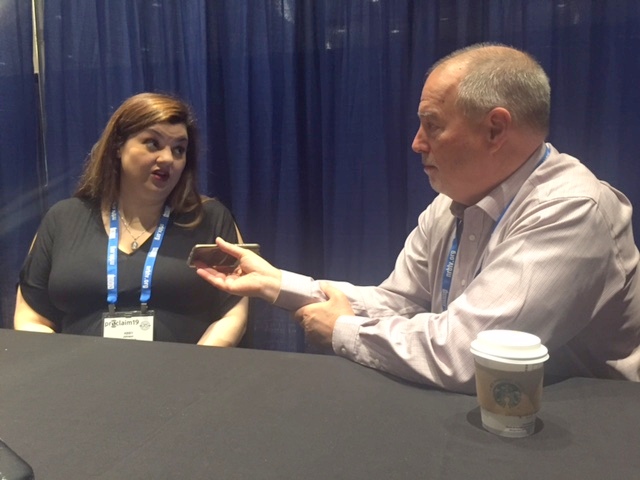 Abby Johnson of Unplanned shares her story with Jeff

“Since that time I have been speaking up, trying to expose the abortion industry but also trying to facilitate healing for those who have been wounded by abortion.  Over the past nine years, I have talked to thousands of women who have been hurt, either physically or emotionally, by the guilt and shame they live with.  Their stories are often dismissed in our society today because everyone wants to make abortion normal.  They want to sanitize it, saying it is just a medical procedure. Taking a human being’s life, however, is not normal. It is not just another procedure. It is something that women live with the rest of their lives.”

Abby Never Planned on Telling the story of Unplanned

Q. Abby, how did the breakup go when you left Planned Parenthood? Did they throw you a party? I mean, you had been a previous employee of the year, right?

“Honestly, I thought it might go that way.  I thought, these are my friends, they will support me, since they are pro-choice, to respect my choice to no longer perform abortions.  No, it didn’t go like that.  When they found out I had taken a pro-life position, they immediately took me to court.  I guess they think it is illegal to be pro-life.  They tried to get a permanent gag order against me so I would not be able to talk about the things that I know and experienced while in their employ.

I didn’t go to them, but because of Planned Parenthood’s attack on me, the press came to me to get my story.”

“When they did that, they actually sent out a press release to the Associated Press that got picked up by news stations across the country.   I had never anticipated telling my story.  I already had another job. I was going to be the manager at another O.B. practice.  I basically had moved on. I had dealt with the issue that what I had done was wrong, and now I could move forward. But when Fox News and CNN started calling me, asking for my story, asking why I had left, that basically forced me to tell my story to the media.  I didn’t go to them, but because of Planned Parenthood’s attack on me, the press came to me to get my story.”

Q. Abby, so we understand, you did not go to the media, but they came to you, and that is how your story got out into the public?

“Exactly. Their question was, ‘what is it that you have to say that they don’t want you saying?’  It was so interesting for the media to investigate.  I had not spoken publicly to anyone about my time working there. I actually had no intention of telling my story.”

Q.  They have said you were a disgruntled employee trying to make millions selling a false story.

“You know, I was a little disgruntled. I had been told that we were required to double our abortion quota in our clinic. They told us we must sell more abortions, and start doing them through the 6th month of pregnancy. I thought that was absurd, that it was much too late in the pregnancy. Yes, I was very concerned about what was going on.

I didn’t know if the organization was changing, or if because I was so high up in management, I was actually learning what Planned Parenthood was really all about.  Of course, it was the latter.  Honestly, I felt deceived by them. I worked there for eight years and had always been told that they were trying to reduce the number of abortions. I realized, that it was a lie.  We had all bought into that idea. To work there, you want to feel good about your ultimate goal of helping women. It was all a lie.  I thought this is crazy.

I am amazed that God used their press release to move me into the public spotlight to tell my story.  I have a voice today to expose what takes place inside these clinics all across America because of their fear.”

The book and the movie, Unplanned, is a tool to shine the light of truth into the dark abortion chambers of Planned Parenthood.  Go see it this week.  Pray for Abby in this David vs Goliath struggle for the lives of the unborn.  A screening of Unplanned took place in Congress.  Pray for Abby’s story to rock the consciousness of our country.