Top Posts
Knowing the One Who Always Keeps His Word
Pregnancy Resource Centers Fight For Life Amidst Opposition
This World is Not Our Home
Lessons Learned From a Gingerbread House
Let There Be Peace on Earth
‘I Wanna Dance’ movie: Whitney Houston’s success and...
Fact Finding, Sight Seeing, and Prayer Walking
Kidney donation led to 8 life-saving surgeries
The Power of Curiosity
When Love Came Down at Christmas
Home World MissionsPersecution Advocates Fear Rwanda-like Genocide in Nigeria

Advocates for Christians living in Nigeria fear a Rwanda-like genocide there and have urged for a Special Envoy to Nigeria.

Advocates say they are pushing for a Special Envoy because they fear Nigeria will suffer a genocide similar to that which occurred in Rwanda. 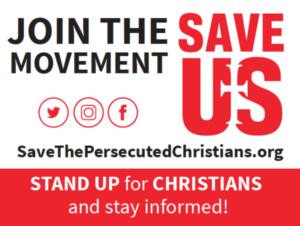 Save the Persecuted Christians Banner

Advocates Save the Persecuted Christians (STPC), which campaigns on behalf of hundreds of millions of persecuted Christians around the globe, has urged the Trump administration to take action in Nigeria through the appointment of a U.S. Special Envoy because of the extreme persecution of Christians there.

The populous nation of Nigeria has been a hotbed for violence against Christians, and those who defend religious freedom in countries like Nigeria fear another genocide along the lines of Rwanda is a very real possibility.

“With all we’ve been hearing from Nigeria, many of us who are advocates for persecuted Christians worldwide, and especially in Nigeria, fear we are about to see a Rwanda rewind there,” said STPC Executive Director Dede Laugesen. “Meanwhile, the West is watching in silence as a Democratic African nation—the most populous on the continent—slides toward an explosion of mass genocide. It holds its breath and wonders, ‘Is today the day? Is today Nigeria’s last day?’

“We hope and pray something may be done to knock this train off its tracks,” she continued. “But, alas, until the United States recognizes and addresses it for what it is—government-backed jihad, and what it isn’t—herder-farmer conflict—we are powerless to help the hundreds of millions of innocent people targeted for annihilation.”

According to the STPC report, Laugesen said that this month alone, the Nigerian federal government has negotiated with the Fulani’s Miyetti Allah Cattle Breeders Association of Nigeria (MACBAN) a $277 million USD payment over two years in an effort to end the Fulani-instigated kidnappings plaguing the country. She notes many in Nigeria believe the money coming from the Buhari regime, which is heavily weighted with Fulanis, will only further fund Fulani militias and do nothing to stop the violence.

STPC said ethnic groups and Christian leaders in Nigeria are also voicing concern over Nigerian federal government plans to set up a radio station for the Fulani that will broadcast only in their language, Fulfude. Radio was used in Rwanda to ignite mass violence, notes Laugesen. Many believe this communication avenue will be used to unify terrorist activities of the Fulani in northern Nigeria and enable coordinated violence over large areas. Additionally, the Nigerian federal government has rescinded all gun permits in the country as of June 1. Ordinary citizens and local defense militias are no longer allowed guns.

A former Nigerian president, Nobel laureate and Nigerian Christian leaders all agree that what is happening in Nigeria is full-scale jihad.

“National Christian Elders Forum, NCEF, and Nobel laureate, Prof. Wole Soyinka, have thrown their weight behind Chief Olusegun Obasanjo’s call for an end to insecurity in the country,” reported vanguardngr.com, a daily newspaper published in Nigeria. “While NCEF agreed with the former president that Boko Haram and herdsmen activities have become a tool to Fulanise West Africa and Islamise Africa, Soyinka said the country was undergoing horrendous descent to the abyss.”

Laugesen added, “The people of northern Nigeria are at the mercy of government officials who have failed to stop two of the world’s most dangerous and aggressive jihadist groups. Boko Haram and Fulani militants are raping, pillaging, kidnapping, murdering and otherwise terrorizing Nigerian citizens in a blatant and unhindered campaign to annihilate the farmers and run them off their land. These groups are waging a genocidal, ethno-religious war. They do so with government impunity and Western silence.

“It is time for Congress to investigate the true nature of these attacks, and Nigeria’s inability—or unwillingness—to stop the slaughter of its people,” Laugesen continued. “If Nigeria is allowed to implode and the jihadists win the day, all of West Africa will be destabilized and refugees will leave for Europe and elsewhere by the tens of thousands.”

The 6,000 Christians who were murdered in Nigeria in the first half of 2018 alone are sobering evidence that a large-scale genocide could be imminent. This figure is made known on Save the Persecuted Christians traveling exhibit called “The People of the Cross,” which displays heartbreaking photos and facts, and details the tragedy that children, women, the elderly and Christians in general experience when persecuted in countries around the world.

The Nigeria banner reads: “Human rights groups describe Muslim Fulani and Boko Haram jihadi attacks as ‘war by Islam to eliminate Christianity.’ Unhindered by Nigeria’s leaders, who are Islamists, these attacks threaten to cleanse Nigeria of Christians—roughly half the population.”

Each of 24 banners in “The People of the Cross” exhibit feature images, facts and quotes from recent news stories about the persecution of Christians in multiple countries, such as North Korea, where Christians are tortured or worse; Syria, where Christian girls and women have been sold into sex slavery; and China, where Communists are increasingly hostile to people of faith and churches and shrines are being demolished. A majority of the countries highlighted in the banners are high on the 2019 World Watch List from Open Doors USA.

The exhibit premiered in July 2018 at the U.S. Capitol as a side event to the first-ever U.S. Ministerial to Advance Religious Freedom. Since then, it has toured the United States, reaching tens of thousands. “The People of the Cross” exhibit is available for churches, public venues and special events. To learn more about hosting “The People of the Cross,” contact Save the Persecuted Christians or visit the website, where all the panels are available to view online.

The mission of Save the Persecuted Christians is to save lives and save souls by holding the persecutors accountable and creating costs for their crimes against humanity. To that end, it will disseminate actionable information about the magnitude of such crimes and bring to bear a movement of concerned Americans determined to hold persecutors accountable for such crimes and create real costs for perpetrating them against those who follow Jesus.

According to Aid to the Church in Need, which released its biannual report on Religious Freedom in the World in November, over 300 million Christians experience persecution. According to Open Doors, 245 million Christians are victims of high to extreme levels of persecution (i.e., torture, rape, sex-slavery, expulsion, murder and genocide), an increase of 14 percent over 2018. Open Doors also estimates 1 in 9 of the world’s Christians experience persecution and that every month: 345 Christians are killed, often in public and without regard to gender or age; 219 Christians are abducted and imprisoned indefinitely without trial; and 106 churches are demolished.

Because most of these crimes are not covered in the media, Save the Persecuted Christians developed a dedicated news aggregator—www.ChristianPersecutionNews.com  — to capture current instances of persecution and to provide readers an easy way to share these heartbreaking stories with others.

With so much of the world’s Christian population being attacked, imprisoned and/or exiled for their beliefs, like those in Nigeria, the need has never been greater for the sort of grassroots campaign STPC’s SaveUs Movement is working to foster. Its efforts are modeled after a miraculously successful one that helped free another population suffering from heavy persecution—Soviet Jews—by penalizing those in the Kremlin responsible for such repression. Through this movement, Save the Persecuted Christians endeavors to provide American policymakers with the popular support they need to effect real change worldwide and alleviate systemically the suffering being experienced by so many of those following Christ.

‘EveryCampus’ Summit Focuses on Every US Campus