Top Posts
Knowing the One Who Always Keeps His Word
Pregnancy Resource Centers Fight For Life Amidst Opposition
This World is Not Our Home
Lessons Learned From a Gingerbread House
Let There Be Peace on Earth
‘I Wanna Dance’ movie: Whitney Houston’s success and...
Fact Finding, Sight Seeing, and Prayer Walking
Kidney donation led to 8 life-saving surgeries
The Power of Curiosity
When Love Came Down at Christmas
Home ANS Feature After missionary plane crashed in Bering Sea off Alaska, God brought rescue 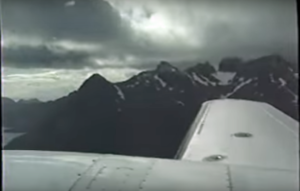 placidly flowing Hudson River in 2009 and all 155 people aboard were rescued by nearby boats.

But an even more dramatic and miraculous rescue took place in the frigid waters off Nome, Alaska, as seven missionaries were plucked from the Bering Sea following a plane crash in 1993.

“I baptized the former head of the communist party,” recalls Dave Anderson. “She gave her life to the Lord and the next day we flew back.”

Dave and Barb founded Fellowship Ministries in 1975 and later, the Shepherd’s Canyon Retreat center, where they minister to Christian leaders in need of renewal and refreshing. He recounted his story to God Reports; other details for this story were found in a documentary about the rescue made by Terry Burge.

On the team’s return flight to Nome, Barb happened to glance at the instrument panel and noticed the gas tanks were not full.

When Chief Pilot Dave Cochran refueled the plane, he thought he had enough for at least two hours of flying time. They needed one hour and 30 minutes to make it to Nome.

After they left Russia, they refueled with American fuel because the Russian aviation fuel is so poor it damages engines. As a result, they were ferrying empty gas cans back to the U.S. to have them refilled and sent back. Those empty gas cans turned out to be one of the important details in God’s plan to save their lives.

Before their plane departed from Russia, a guard came up to their group and said, “Good luck.” They would need more than luck in the next few hours.

The plane’s initial climb was turbulent. “I was praying, Lord, could you just clear the skies for us and give us a smooth flight? Barb recalls. “We rose and rose and rose what for me seemed an eternity. It seemed like we were going higher and higher and all of a sudden we broke into the most clear, sunny blue skies. It was beautiful and the sun was so bright and I said, Thank you Jesus. I’m grateful for this.”

Dave had fallen asleep and was blissfully ignorant of the impending danger.

Pam Swedburg woke up to the sound of a chug-chug. The first of two tanks for their twin-engine plane had run out of fuel.

“All of a sudden there was a side to side motion, unlike anything I had ever felt before in a plane,” Barb recalls. “It’s an eerie feeling and it frightened me.”

Dave woke up abruptly and looked around. Everyone’s eyes were suddenly very wide as the reality of the situation began to hit them.

The pilot realized he had about five minutes left on the remaining engine. He radioed air traffic control and declared an emergency. “After the second engine quit, I tried to keep it at 130 miles per hour glide speed,” Pilot Cochran says. “I could see we weren’t going to make it to land.”

The team members began to pray in earnest. “It took a minute to fall about 3500 feet, during which time we were having an informal prayer meeting,” Dave says.

Barb heard their pilot shout “May Day! May Day!” into the radio and then “Brace for impact!” The plane hit the water at 90 miles per hour.

The water slammed into the windshield and flew up the sides of the plane ferociously. Everyone was still conscious and miraculously, there were no casualties from the impact. The plane was mostly intact, but water was gushing in and it would sink within minutes.

Surprisingly, no life vests were on board. “Everybody out! Hang on to one of those gas cans,” Captain Cochran yelled out. “That’s our flotation gear.”

“Out the plane we went and a minute later the plane sank and we found ourselves in three to five foot swells,” Dave recounts. He tried to stay close to Barb, but the swells began to separate them.

The water temperature was 41 degrees Fahrenheit. At that temperature, someone struggling in the water can become disoriented within five minutes and lose consciousness in 30 minutes.