Top Posts
There’s A Light That Enters Houses With No...
Knowing the One Who Always Keeps His Word
Pregnancy Resource Centers Fight For Life Amidst Opposition
This World is Not Our Home
Lessons Learned From a Gingerbread House
Let There Be Peace on Earth
‘I Wanna Dance’ movie: Whitney Houston’s success and...
Fact Finding, Sight Seeing, and Prayer Walking
Kidney donation led to 8 life-saving surgeries
The Power of Curiosity
Home World MissionsPersecution Algeria: Church grows 50-fold in 10 years

The world’s largest Arab country, once home to the Phoenicians, Romans, Ottomans, and French is now home to a 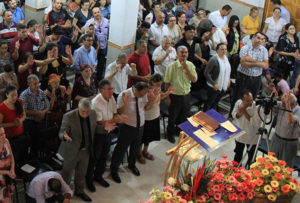 Algeria is at least 95 percent Muslim, and believers face intolerable pressures from family and neighbors militating against the open expression of their faith, along with anti-conversion and blasphemy laws, according to Open Doors’ World Watch List.

Yet in God’s economy, as much as Satan attempts to squeeze the church, the faster it grows. This has been demonstrated during the last decade in Algeria. “In 2008, there were an estimated 10,000 Christians…by 2015, that number had grown to 380,000. I believe it could now be approaching 500,000,” notes Dr. Rex Rogers, president of SAT-7 USA. He attributes a healthy portion of the growth to Christian satellite programming they produce and beam into this and other North African countries.

Joshua Project, which also tracks the growth of the church, confirms there are at least 600,000 professing Christians in Algeria, a huge increase propelled by the Holy Spirit.

“There is now a rapidly growing church in Northern Algeria with 1,000 believers. So many are coming to Christ that every few months they hold a baptism service where 60 to 100 new believers declare their new faith,” Rogers says. This church has already planted 14 daughter churches, he says.

One Berber woman shared the following testimony with SAT-7: “I was married at 16; my father had chosen a man for me to be my husband, a man that I had never met. I suffered a lot with him; he was always beating me, even without any reason. Beatings and scolding women are a part of manhood in our society.