Top Posts
Knowing the One Who Always Keeps His Word
Pregnancy Resource Centers Fight For Life Amidst Opposition
This World is Not Our Home
Lessons Learned From a Gingerbread House
Let There Be Peace on Earth
‘I Wanna Dance’ movie: Whitney Houston’s success and...
Fact Finding, Sight Seeing, and Prayer Walking
Kidney donation led to 8 life-saving surgeries
The Power of Curiosity
When Love Came Down at Christmas
Home ANS Feature An airstrip, MAF airplanes, a school, and a clinic used by God

NAMPA, IDAHO (ANS) — Stephen and Carolyn Crockett, missionaries among the Moi people in a remote village of Papua, Indonesia, were often awakened at night by the cries of desperate parents.

The couple have lived and worked with the Moi people since 2000. They and their own two children were far from any medical center, or any other modern convenience, for that matter, according to Jennifer Wolf writing for Mission Aviation Fellowship (MAF). 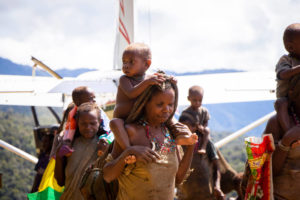 “We maybe had some trauma from years of being here and going through times where the ‘plague’ or something would go through … we’d have a lot of babies dying, people sick,” said Stephen.

Stephen and Carolyn are not trained medical professionals, but even with just a basic understanding of first aid, they were often the closest thing the Moi had to medical care.

“We took care of the medical needs of the Moi people up until 2016,” said Carolyn. “It was nerve-wracking at times, wondering if we were helping them properly with their medical needs. But we’ve been very thankful that that responsibility has been lifted off our shoulders.”

Today,Missiona viation Fellowship says there’s a clinic in the Moi village—and an elementary school. There are Christian doctors, nurses, and teachers. An airstrip, completed in 2008, opened the doors for all of this.

“We’ve worked very close with MAF through the years and we’re so thankful, said Stephen. “Everything that’s happened in here is because of what these flight services have offered us. The Moi themselves have benefited, not only from medicine but also physical material things as well.”

And the Moi have benefited from the Crocketts’ presence as well. They’ve learned to read in their tribal language. They’ve learned about “God’s Story” and how the creator of the universe loved them and gave His life for them.

“God’s word has changed everything for them,” said Stephen.

The Moi lived in fear of evil spirits, in fear of death. They’ll tell you:” ‘Satan blinded our eyes. He blinded the eyes of our ancestors. We were living in darkness. We had no hope,’ ” said Stephen. “A lot of things they believed in their old culture—they were, of course, uneducated—but it’s because Satan blinded their eyes. I think to some degree it incapacitated them. They couldn’t think logically about a lot of things.”

But as soon as the Moi received the gospel, and with the Holy Spirit living inside of them, Stephen says it was almost immediate: they started thinking logically.

“We’ve seen some physical and material things that have taken place because of that too. That kind of leads into the school and medicine as well,” added Stephen. “Once the scriptural foundation was there, these other things fell into place quite naturally and they were ready for that change.”