Top Posts
Colorado football coach Sanders’ unabashed faith
There’s A Light That Enters Houses With No...
Knowing the One Who Always Keeps His Word
Pregnancy Resource Centers Fight For Life Amidst Opposition
This World is Not Our Home
Lessons Learned From a Gingerbread House
Let There Be Peace on Earth
‘I Wanna Dance’ movie: Whitney Houston’s success and...
Fact Finding, Sight Seeing, and Prayer Walking
Kidney donation led to 8 life-saving surgeries
Home ANS Feature Another wave of violence in Nigeria’s southern Kaduna state

Kaduna State, Nigeria (ANS) – At least 27 people were killed within a 24-hour period between 19 and 20 July in attacks by armed assailants of Fulani ethnicity on communities in southern Kaduna state, according to Christian Solidarity Worldwide.

CSW reports that on 20 July approximately nine people were killed and an unknown number were injured and displaced following an attack on Gora Gan village in Zangon Kataf Local Government Area (LGA) which occurred at around 7.00pm. 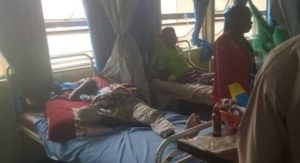 Victims of the attack on Kukum Daji. Credit: CSW-Nigeria.

On 19 July Fulani assailants armed with guns and machetes attacked a wedding reception at a home in Kukum Daji village in the Kaura LGA at around 10.30pm, killing 15 and injuring around 30 people.  Most of the victims were young people. Several survivors received treatment in medical facilities in Kafanchan, while others were transported to Barau Dikko Hospital in Kaduna metropolis, where three later died, raising the death toll to 18.

According to local reports, the attack on Kukum Daji was one of several on locations in Kaura LGA.  Kagoro, Manchok and Malugum were also attacked; however, there is no accurate information on the number of casualties. Prior to these attacks, on 20 June, the Kaura Youth Coalition and National Association of Takad Youths issued a press statement warning of the presence of some 600 heavily armed militia men in the Zangang Hills. Although the Kaduna State Government sent soldiers to search parts of the area, both the commissioner of internal security, Samuel Aruwan, and Kaduna State Governor Nasir el-Rufai later dismissed the report as false.

The attacks are a part of a campaign of violence targeting communities in southern Kaduna which has been ongoing since January 2020, and is characterised by murder, looting, rape, abductions for ransom and forced displacement. Last week at least 22 people were killed and over 1000 were displaced in a series of attacks on communities in Zangon Kataf LGA between 10 and 12 July. The attacks continued for three days despite a significant military presence in the area.

In a statement issued on 20 July, the Adara Development Association highlighted an attack by Fulani assailants on Mai-ido and neighbouring villages in Kachia LGA that took place on 16 July, in which 32 people were abducted and 4 people were killed, including John Auta, Danjuma Bala and Christopher Ayuba.

Subsequently on 17 July, Mr. Ayuba Bulus from Doka Avong Village in Kajuru LGA was murdered on his farm. Later that day, Fulani assailants looted and destroyed property in the nearby Efele settlement, and hacked to death Gloria Shagari, 25, her children Dorcas, 6, and Faith, 3, and Hussaini Daudu, 40. Another victim, Baptist church leader Reverend Thomas M. Gambo, remains in hospital in a critical condition.

The failure of state and federal governments to address the violence in Nigeria’s central states adequately has contributed to an alarming rise in deadly rural banditry involving armed men of Fulani extraction that is impacting severely on Hausa Muslim communities in north western states. On 19 July, at least 23 Nigerian troops were ambushed and killed in forest area in Jibia LGA, Katsina State as they were on their way to clear a terrorist camp from Shimfida village. The ambush occurred amidst a growing terrorist presence in the area.

In a video released in January, entitled ‘Response to polytheistic Nigerian Army’, Boko Haram leader Abubakar Shekau spoke in Kanuri, Arabic and Hausa as usual, but also added messages in the Fulani language, Fulfude. In a video released in early July, an armed group in Niger State in northwest declared its allegiance to Shekau, and a week before the ambush the Nigerian newspaper HumAngle revealed he had also cemented alliances with armed groups in Zamfara state in the north west, and was in the process of formalising relations with groups in Katsina and Sokoto states, also in the northwest, and in Adamawa, Kogi and Taraba states in central Nigeria. Shekau has also secured the allegiance of armed groups in Cameroon, Chad and the Republic of Niger.

CSW’s Chief Operating Officer Scot Bower said: “CSW is dismayed by the relentless attacks in southern Kaduna, and we extend our deepest condolences to those who have lost loved ones and livelihoods. It is deeply disturbing that perpetrators continue to operate with impunity. Worse still, the failure or unwillingness of those in authority to address these and other non-state actors and to secure ungoverned spaces, has not only allowed the violence to mutate, but has also created an environment in which Boko Haram can extend its operations. Nigeria’s increasing security vacuum is a threat to the nation and region.  We therefore reiterate our call for international pressure on both the state and federal authorities to fulfil their duty of care towards all citizens regardless of creed or ethnicity, and to fully resource the armed forces, enabling them to secure the nation before it is too late. We also repeat our call for the UN Human Rights Council to convene a special session on the human rights situation in central Nigeria, with particular focus on current violations in the southern Kaduna area and Plateau State.”