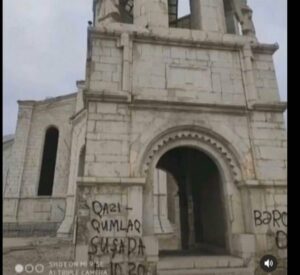 Witney, England – Scores of religious sites, artifacts and gravestones have been desecrated or plundered in Nagorno-Karabakh, during the recent military conflict with majority-Muslim Azerbaijan, says Christian charity Open Doors according to reports they’ve received from the region.

Armenian Christians are saying that they fear that much of Christian heritage of the Nagorno-Karabakh region, is at risk, as more of it passes to the control ofAzerbaijan.

Open Doors spokesperson Rene Levonian says that these fears are well founded, based on the fate of another region now under Azerbaijani control. “One hundred years ago, two-thirds of the population of Nakhichevan (an Azerbaijani enclave) were Armenians. Today, they are all gone, and the entire Armenian Christian and cultural heritage vanished. This explains why Armenian Christians have no hope for preservation of their heritage in Nagorno Karabakh.”

“Many of these fighters come from the same Islamist factions that have been destroying Christian holy sites across Syria,” says Julia Bicknell, analyst for Open Doors’ World Watch List, which lists the 50 nations where Christians face the most extreme persecution.

“Along with the human lives lost, this is a tragedy. It’s a systematic attempt to erase Armenia’s Christian heritage from the region.”

At Eternity’s Gate: A Portrait of van Gogh...