Top Posts
Colorado football coach Sanders’ unabashed faith
There’s A Light That Enters Houses With No...
Knowing the One Who Always Keeps His Word
Pregnancy Resource Centers Fight For Life Amidst Opposition
This World is Not Our Home
Lessons Learned From a Gingerbread House
Let There Be Peace on Earth
‘I Wanna Dance’ movie: Whitney Houston’s success and...
Fact Finding, Sight Seeing, and Prayer Walking
Kidney donation led to 8 life-saving surgeries
Home ANS Feature As Many As The Stars tells story of transforming China’s childcare policy

London, England (ANS) – The Founder of the charity Care for Children has released the book As Many As The Stars which tells the story of how he moved with his wife and six young children from the UK to China to follow his calling. 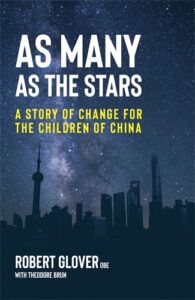 Robert Glover was a social worker in the East of England who went on to work with the Chinese government to radically transform policy on care welfare.

When Care for Children was launched to work in Shanghai, China in 1998, there wasn’t a word in Mandarin for ‘foster care’.

In conversations with the Chinese government Robert demonstrated that family-based fostering and adoption was a better alternative to the system of state-sponsored orphanages. Now Robert’s charity Care for Children has reached their goal of getting ONE MILLION children fostered or adopted, which is 85% of the children in the state-run institutions and they have since expanded into Thailand and Vietnam.

An independent evaluation of the pilot project in Shanghai by the University of East Anglia (UK) concluded it to be one of the best foster care projects in the world, and in 2003 this led to an invitation from the Ministry of Civil Affairs in Beijing to expand the project nationally.

In 2005 Robert was awarded an OBE by Her Majesty Queen Elizabeth II for services to orphans and vulnerable children in China.

Told with humour and  simplicity As Many as the Stars gives a deeper understanding of the importance of families and how to live with greater compassion, generosity and courage.

Robert Glover was a submariner and then a footballer before he settled into a career as a social worker caring for difficult teenagers in Norfolk. Since childhood he nurtured a dream to visit China and Robert’s childhood dream developed into a vision: to help the many children who have been abandoned into orphanages across China as an unintended consequence of the One Child Policy.

‘A determined man can overcome all obstacles. Robert Glover OBE is a friend and a true hero of mine…lives in Asia have been greatly impacted by having a loving, local family to call their own’

‘At last the world has a story it’s been hoping for. This is a true story… I watched it happen with wonder. Read it and be jealous!’