Top Posts
Knowing the One Who Always Keeps His Word
Pregnancy Resource Centers Fight For Life Amidst Opposition
This World is Not Our Home
Lessons Learned From a Gingerbread House
Let There Be Peace on Earth
‘I Wanna Dance’ movie: Whitney Houston’s success and...
Fact Finding, Sight Seeing, and Prayer Walking
Kidney donation led to 8 life-saving surgeries
The Power of Curiosity
When Love Came Down at Christmas
Home World MissionsPersecution Asia Bibi trapped in Prison

KARACHI, PAKISTAN (ANS – Nov. 6, 2018) – Asia Bibi, the Pakistani Christian woman whose death sentence for blasphemy charges was commuted last week, is trapped in a prison that has been converted into a safe house.

Asia Bibi, a mother of five from Punjab province, is unable to leave the facility over fears that her life is in jeopardy, according to a source with direct knowledge of the facility told CNN on Monday. 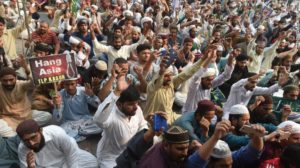 In newly released details, CNN has learned that the Pakistani army and intelligence services have jurisdiction over the jail and are in charge of her safety, the source said.

Extra surveillance cameras have been installed at the converted jail in recent days and any individuals entering or leaving the location are searched, including those who are charged with preparing Bibi’s food, according to the police source.

Bibi’s lawyer Saiful Malook, who has fled Pakistan to the Netherlands, told reporters in The Hague on Monday that the UN and EU made him leave “against his wishes.”

“I pressed them that I would not leave the country unless I get Asia out of the prison,” Malook said during a news conference.

The lawyer had previously told CNN that he was concerned for his life.

His departure comes as Bibi’s husband, Ashiq Masih, begged the United Kingdom, the United States or Canada to grant his family asylum, in a video message seen by The Guardian newspaper.

Bibi was convicted of blasphemy in 2010 and sentenced to hang after she was accused of defiling the name of the Prophet Mohammed during an argument a year earlier with Muslim colleagues.

The workers had refused to drink from a bucket of water Bibi had touched because she was not Muslim. At the time, Bibi said the case was a matter of women who didn’t like her “taking revenge.”

On Wednesday, she won her appeal against the conviction and death sentence.

In an effort to end the protests, the government on Friday struck a deal with the TLP that included a pledge not to oppose a review petition filed against the Supreme Court’s judgment. The petition is not yet legally binding.

Pakistan’s new government has given in to extremists, and not for the last time.

The government also agreed not to oppose a TLP application to add Bibi to a list preventing her from leaving the country. And the government agreed to release everyone detained in connection with the protests.

The TLP had previously vowed to take to the streets if Bibi were released, and large protests broke out in Islamabad and Lahore soon after the ruling was announced.

Under Pakistan’s penal code, the offense of blasphemy is punishable by death or life imprisonment. Widely criticized by international human rights groups, the law has been used disproportionately against minority religious groups in the country and journalists who are critical of the Pakistani religious establishment.

Bibi’s case has attracted widespread outrage and support from Christians worldwide. Conservative Islamist groups in Pakistan have demanded the death penalty be carried out.

The BBC reports Asia Bibi’s husband  has pleaded for asylum from the UK, US or Canada. 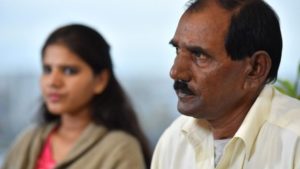 Asia Bibi’s husband, Ashiq Masih, said they were in great danger in Pakistan.

The Supreme Court overturned her conviction on Wednesday, saying the case against her was based on flimsy evidence. But she has yet to be freed.

Her acquittal sparked violent protests, and the government has now agreed to try to stop her leaving the country.

On Saturday, her lawyer, Saif Mulook, fled Pakistan, saying he feared for his life.

Asia Noreen – commonly known as Asia Bibi – was convicted in 2010 of insulting the Prophet Muhammad during a row with neighbors. Several countries have offered her asylum.

What does her husband say? In a video message, Mr Masih said he feared for his family’s safety.

“I am requesting the prime minister of the UK help us and as far as possible grant us freedom,” he said. He also called on Canadian and US leaders for help.

Earlier, in an interview with German broadcaster DW, he said he and his family were “frightened” after Pakistan’s authorities struck a deal with the hardline Tehreek-i-Labaik (TLP) party in order to end protests over Asia Bibi’s acquittal.

As part of the agreement, officials will start proceedings to bar her from leaving the country. The government will also not prevent protesters legally challenging the Supreme Court decision to release her.

“The agreement has sent a shiver down my spine,” Mr Masih told DW. “It is wrong to set a precedent in which you pile pressure onto the judiciary.”

“The current situation is very dangerous for us. We have no security and are hiding here and there, frequently changing our location.”

He added: “My wife, Asia Bibi, has already suffered greatly. She has spent 10 years in jail. My daughters were dying to see her free, but now this review petition will prolong her plight.”

UK MP Tom Tugendhat, who chairs the Foreign Affairs Committee in Parliament, said he had asked the Home Office for an “urgent evaluation of the situation,” the Guardian reported.

Meanwhile, Pakistan’s Information Minister Fawad Chaudry told the BBC that security had been “beefed up” to protect Asia Bibi.

“Yes, there is a situation and we are dealing with it, but I assure you that her life is not in danger,” he told the BBC’s Newshour program.

He described the government’s deal with the protesters as “firefighting,” saying it helped to “resolve the situation without resorting to violence.”

What was Asia Bibi accused of? The trial stems from an argument Asia Bibi had with a group of women in June 2009.

They were harvesting fruit when a row broke out about a bucket of water. The women said that because she had used a cup, they could no longer touch it, as her faith had made it unclean.

Prosecutors alleged that in the row which followed, the women said Asia Bibi should convert to Islam and that she made offensive comments about the Prophet Muhammad in response.

She was later beaten up at her home, during which her accusers say she confessed to blasphemy. She was arrested after a police investigation.

In Wednesday’s ruling, the Supreme Court said that the case was based on unreliable evidence and her confession was delivered in front of a crowd “threatening to kill her.”

Why is this case so divisive? Islam is Pakistan’s national religion and underpins its legal system. Public support for the strict blasphemy laws is strong.

Hard-line politicians have often backed severe punishments, partly as a way of shoring up their support base.

But critics say the laws have often been used to get revenge after personal disputes, and that convictions are based on thin evidence.

The vast majority of those convicted are Muslims or members of the Ahmadi community, but since the 1990s scores of Christians have been convicted. They make up just 1.6% of the population. 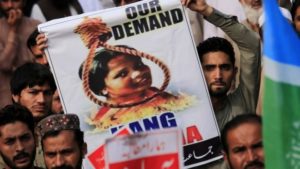 Protestors have been clamoring for Asia Bibi to be hanged

The Christian community has been targeted by numerous attacks in recent years, leaving many feeling vulnerable to a climate of intolerance.

Since 1990, at least 65 people have reportedly been killed in Pakistan over claims of blasphemy.

The BBC also reports the lawyer representing a Christian woman acquitted of blasphemy after eight years on death row has fled Pakistan in fear for his life.

Saif Mulook told news agency AFP he had to leave so he could continue to represent Asia Bibi, whose conviction was overturned by judges on Wednesday.

Officials have since agreed to bar Ms Bibi from leaving Pakistan in order to end violent protests over the ruling. Campaigners blasted the deal as akin to signing her “death warrant.”

Asia Bibi was convicted in 2010 of insulting the Prophet Muhammad during a row with neighbors, and many are calling for the reinstatement of the death penalty following her acquittal.

Mr Mulook told the BBC earlier this week she would need to move to a Western country for her own safety. A number of attempts have previously been made on her life.

Several countries have offered her asylum.

Pakistani Information Minister Fawad Chaudhry defended the government against allegations that a deal reached with an Islamist party was capitulating to extremists.

He said the government would “take all steps necessary” to ensure Asia Bibi’s safety. Mr Mulook, however, called the agreement “painful.”

“They cannot even implement an order of the country’s highest court,” he told AFP before he boarded the plane to Europe.

Mr Mulook said he had decided to leave as it was “not possible” to continue living in Pakistan, adding: “I need to stay alive as I still have to fight the legal battle for Asia Bibi.”

He told Pakistan’s Express Tribune he would return to the country to defend his client – but needed the government to provide security.

The protests were led by the Tehreek-i-Labaik (TLP) party.

As party of its deal with the TLP, the government said it would not oppose petitions filed against the Supreme Court’s verdict.

What else is in the deal? All protesters arrested since Asia Bibi’s acquittal will be released, and any violence towards them will be investigated.

The government will also start legal proceedings to put Ms Bibi on a list which would ban her from leaving Pakistan.

In return, the TLP is asking its supporters to stop the protests and disperse peacefully.

The authorities earlier said that Ms Bibi was scheduled for release later this week.