Top Posts
There’s A Light That Enters Houses With No...
Knowing the One Who Always Keeps His Word
Pregnancy Resource Centers Fight For Life Amidst Opposition
This World is Not Our Home
Lessons Learned From a Gingerbread House
Let There Be Peace on Earth
‘I Wanna Dance’ movie: Whitney Houston’s success and...
Fact Finding, Sight Seeing, and Prayer Walking
Kidney donation led to 8 life-saving surgeries
The Power of Curiosity
Home ANS Feature At least one abducted Chibok girl free from Boko Haram captivity in Nigeria

Witney, England, (ANS) – At least one of the schoolgirls abducted by Boko Haram seven years ago from the town of Chibok – in northeast Nigeria – has escaped captivity, according to Christian persecution watchdog Open Doors UK and Ireland. 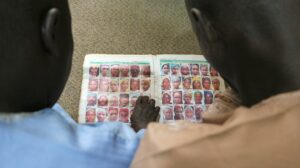 Fathers of Chibok girls looking at portraits of some of the schoolgirls abducted by Boko Haram in 2014.

According to the charity’s sources, other captives – not necessarily from Chibok – may also have escaped but the total number of those free are not yet known.

“One of the Chibok girls who has escaped was able to speak to her father over the phone and has been clearly identified,” said Illia Djadi, Open Doors senior analyst on freedom of religion and belief in sub-Saharan Africa.

Amid conflicting reports, the new Chief of Defence Staff of the Nigerian Army, Major General Lucky Irabor has said that the military did not have any Chibok girls among those who escaped Boko Haram captivity during recent army operations in the Sambisa Forest.

However, Open Doors sources on the ground have confirmed that at least one Chibok schoolgirl, Hauwa Halima Maigana, along with an unknown number of other captives, are now free from Boko Haram captivity.

Henrietta Blyth, the CEO of Open Doors UK and Ireland, said: “The news of girls escaping from Boko Haram – including the schoolgirl from Chibok – is a ray of hope that others still in captivity may regain their freedom too.

“The abduction of the Chibok girls seven years ago was a painful illustration of the fact that women are especially vulnerable to persecution in Nigeria because of both their faith and gender.

“Even after escape, their painful journey is normally not yet over – they need to reintegrate into their community and cope with the trauma of their captivity.”

In April 2014 Boko Haram fighters ambushed a state boarding school for girls in the northeastern Nigerian town of Chibok.

The Islamist militants kidnapped 276 – mostly Christian – students and drove them to their hideout in the Sambisa Forest. While some managed to escape captivity, at least 100 have not, as yet, been unaccounted for.

The abduction of the Chibok girls made international headlines, sparking the #BringBackOurGirls campaign.

Illia said: “We want to rejoice with the parents who have been waiting for such a moment for so long – almost seven years of anxiety and terrible agony.”

But he warned that the abduction of girls by Boko Haram, “does not begin and end with Chibok”.

He continued: “In the northeast of Nigeria, Boko Haram spreads terror with its systematic raids on predominantly Christian communities with abductions, sexual violence, and roadblock killings.

“Christians have been specifically targeted and disproportionately been affected by this violence.

“Open Doors data shows that 990 Christians – both men and women – were abducted by militant Islamic groups in Nigeria in the last year.

“The responses by the government are clearly not enough, since perpetrators of such violence are able to continue attacking Christians, and other Nigerians, with impunity.

“Over Christmas, a number of predominantly Christian communities including Chibok were left vulnerable to attacks, destructions and killings.

“At Open Doors, we want to reiterate our call to the Nigerian government to make security its main priority and to provide protection for vulnerable communities.

“Without security people living in northern Nigeria, if not in the rest of the country, will not be able to carry out a normal life.”