High Wycombe, England (ANS) – People are understanding the Scriptures more, and some are coming to faith in Jesus as they hear the word of God through the Malila audio Scriptures, according to Wycliffe Bible Translators. 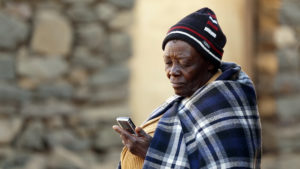 Listening to a MegaVoice audio player

The charity says although the Malila will receive their printed New Testament later this month, the fact that Scripture is already available in audio form is bringing transformation even before the books arrive.

The audio Scriptures are being relayed via solar-powered audio players made by MegaVoice. Majaliwa Mwangwale, who is the Literacy and Scripture Engagement Coordinator for the Malila Bible translation project, reports about a Malila pastor who is using the audio Scriptures:

‘Pastor Safari Mwamahonje, from a church in the village of Shinzingo, had been given a MegaVoice player to listen to the word of God together with others. He says, “This device has made me very happy. Teaching the word of God has become easy as you just need to switch the device on. With the Malila language being used it’s easy for the listeners to understand it. Also, whenever I go to people’s homes, this device is given great prominence, such that it is called ‘God’s spokesman to his people’. A lot of people have been reached with the word of God through this device. And I have got new believers in my church who have heard the word of God through it. May Jesus be given the praise in this.”’

Jo Clifford, who serves with Wycliffe Bible Translators and works alongside the Bible translation teams in Tanzania, comments: ‘Audio Scriptures are vital to help people engage with Scripture in an oral environment, where the spoken word has at least as much weight as the written word, if not more. Printed Scripture will always be important, even in an oral culture. However, not being able to read well – or not at all – can create a massive hurdle, meaning that the printed Scripture is available only to the few. With audio Scriptures everyone can listen, from the young child playing in the street, to the busy mother at home, to the old gentleman sitting in his chair, to the people in the marketplace.’

Jo continues: ‘The Malila language use is very strong. Swahili is spoken, but if another Tanzanian moves to the Malila area to live, they will only be spoken to in Malila, not Swahili. The Malila emphasise sending boys to school so they can provide for their families. This means that many Malila women, especially the older generation, do not speak or understand Swahili well and often cannot read. Having the audio Scriptures in Malila gives everyone – young and old, educated or not – the opportunity to hear and understand what God has to say to them.’

As the Malila are finding after many years of using Swahili in church life, switching to their own language is a transformative experience. Pastor Jafeti Mwampamba, from a church in the village of Shigamba, says, ‘It’s so true that God speaks to us by using a language that we understand. People in our church are very happy when they hear God’s word in their mother tongue. Personally, when I preach the word of God, I prefer to use a language that’s understood well by the people. So if people succeed in having Bibles in their mother tongue it will also help them to grow in their language use. Sometimes it was difficult for us to translate a certain word from Swahili into our language, but concerning this God has now heard our cry.’

Now the Malila are making final preparations to dedicate the Malila New Testament on Saturday 5 September, when the power of the printed word will be added to that of the spoken word.

Choose to Be a Servant Among Others